[Late to the shindig? No worries! Here are Parts One and Two.]

In lieu of an effusive, “I never was the same again after that summer” capstone, here’s my list of dos and don’ts, along with some things I wish I’d known before I went on a New Warrior retreat.

It’s Legitimately Not a Cult

I was flipping through the registration packet a few days before training began and found a passage that read, “Your sleep may be less than usual but adequate. … Your weekend diet will be restricted and may be lighter than usual [.]” And, as you may have already guessed, I went all, “Mother of Hades, these are brainwashing techniques.” The thing I had to remember, though, is that cults are usually pretty tight-lipped about using brainwashing techniques — it’s what makes them so good at being cults. So the very fact that the New Warriors were like, “Hey, just FYI,” ahead of time moves them right out of that camp.

And also, they, y’know, let us leave. There was a debriefing once the retreat was officially over, and I assumed this was when we were going to get the Amway pitch, but instead, the staffers were like, “There are groups in Houston and Austin if you’d like to continue on this path, but if not, no biggie. We’re glad you came! Exit’s thataway. Mind the gap.”

I reread the packet once I got back to Houston, and I was more than a little chagrined to discover that all of the things I’d lost my shit over were covered in the material. Read critically, people: This is my message to you. One-eyed Falcon signed up for the weekend on a whim and did not read the packet at all. He’s also diabetic, so there was a bit of a kerfuffle when the staff realized that all of the forbidden snacks he had on him were medically necessary.

The staff did not make him turn in his snacks, but they were also like, “It would’ve been best if you’d mentioned the diabetes before now, on account of we’re not huge fans of negligent homicide charges.”

Eat a Hearty Meal Before You Arrive

When the New Warriors say, “Your weekend diet will be restricted,” they are not screwing around. At the same time, nobody starved — in fact, here’s a conversation between myself and my cabinmates on the subject.

Fearless Mongoose: “I can’t believe how little they’re feeding us.”

Fast Cat: “Why won’t they give us actual meals? And why do they keep telling us the food is ‘adequate’?”

Me: “It’s because they’re trying to brainwash us. Don’t let them into your heads.”

Falcon: “Hey, guys? I’ve got all these snacks if anyone needs something…”

Fearless Mongoose, Fast Cat, and Me: “Hmm? Oh, no, thanks. We’re not hungry.”

Show Up On Time

According to the packet, attendees should arrive on Friday evening between 5:30 and 6:00 p.m. Don’t show up early, and emphatically don’t show up late, unless you get a terribly sexy thrill out of spotlights and teachable moments. Just trust me on this one.

There was one last ceremony on Sunday afternoon, and while everyone else was pretty eager about it, I was not having it: I was exhausted, my spoons were depleted, and I just needed to be still and quiet for a while. I steeled myself for a battle of wills as the other men filed into the ritual space, ready to argue my way to freedom, and then I saw Prowling Wolf off to the side with one of the staff members. His back had been acting up, and when I went over to check on him, the staffer was like, “Oh, are you not participating either? No prob. Why don’t you sit by the door, though, so you can still hear what’s going on.” And he brought me a chair.

I did worry that I’d feel left out after the ceremony was finished, or that the other guys would judge me for not going through it with them. But once it was over, everyone was like, “Welp, that sure happened. Where’s Jackalope? Oh, hey! There you are. Come hang out with us.”

To sum up, everything about the weekend is voluntary, and no one is going to care if you need to sit something out. Your safety and well-being will be a priority to the people running the show.

Parking Will Be Limited but Drive Yourself If You Can

One of the participants made it about halfway through the intake process before going, “Nope, not for me,” turning around and going home. Which was fine, really: No harm, no foul… except he’d driven two other guys, who were less than amused to learn they’d been abandoned. The staff found rides for them, but if you’re able, definitely bring your own vehicle.

Let Your Friends and Family Know Where You’ll Be, and That You Probably Won’t Get Home Until Sunday Evening

Prowling Wolf had a moment of panic himself when he realized that he needed to call his probation officer but didn’t have his phone. Everything worked out, but if you do go on a trip like this, seriously, tell someone. I sent five different friends the address and contact info of the property where we were staying, along with the emergency phone number provided in the packet. Granted, I also thought they were going to have to send in a SWAT team and a hostage negotiator to come save me, but a little preventative measure goes a long way in any case.

Don’t Try to Impress Anyone

Throughout the weekend, one of the staff men kept saying, “You could resist… but that’s not why you came.” And in reply, I was like, “VIVA LA RESISTÁNCE.” A big chunk of my stubbornness was, of course, brought on by the constant stream of panic attacks, but my response to all the anxiety was to prove to the staff that they couldn’t break me. This would’ve been pretty darn effective if they’d actually been trying to break me, but seeing as how they weren’t… yeah, it just kind of fell flat. They totally indulged me, though, so that was neighborly of them.

I saw some crocodile tears here and there during the various processes, and while the staff didn’t call anyone out on it, it quickly became obvious when someone was trying to do something “correctly” instead of honestly. Just be yourself — even if you’re like I was at the beginning of the weekend, and your truth is, “I’ve made a horrible, horrible mistake and don’t want to be here.”

Any Time You Can Just Let Go and Say “Fuck It,” Do It

So, With All of That Neatly Wrapped and Topped With a Fetching Bow… Am I Going to Stick with the New Warriors?

The reality is, I do not know. I didn’t get as much out of the weekend overall as some of the other guys did, but I’ve also got the Minoan Brotherhood and the Misfits and my IML class — more brothers than I deserve or know what to do with. I’m not sure if there’s room for 30 more, or if I could even be the kind of brother they need in their lives.

Adequate food for thought, that.

The talisman I received at the end of the training is currently hanging from a stang in my living room. Maybe, at some point in the near or distant future, I’ll put it back on and return to the Land of My Grandfathers, but for the time being, I’m happy to set Screaming Jackalope aside and be Thumper again. And maybe those identities will eventually integrate, or maybe they’ll remain in their own separate cages, but either way, there is one thing I know for certain:

I never was the same again after that summer. 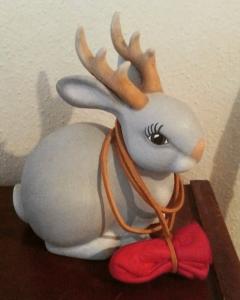 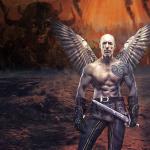 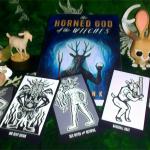 169 responses to “Screaming Jackalope and the New Warrior Training Adventure, Part the Third”