A Discordian Interview with Devin Hunter

In response to my post on fidget spinners, somebody commented, “Uhm… is this some sort of Wiccan Onion?” And let me tell you, I was devastated when I read that. Deva. Stated. I am a serious writer, dagnabbit, covering extremely relevant topics. If people are taking this blog to be nothing but satire and casual witticisms, then I obviously need to get to work and put some no-nonsense journalism on display.

With that goal set firmly in mind, I reached out to bestselling author, award-winning podcaster, founder of the Sacred Fires Tradition of Witchcraft, co-owner of the Datura Trading Co., and all-around prominent occultist Devin Hunter and asked if he’d be willing to submit to a Very Professional interview with me.

Me: Thank you for taking time out of your busy schedule for this interview. What important projects are you currently neglecting in order to chat with me?

Devin Hunter: Well, right now I am supposed to be taking photos for my next book project, but I couldn’t do that, because you kept blowing my phone up about turning this into you. Do your readers know how needy you are in real life?

I try to keep my codependency on the “down-low,” as the kids say. But speaking of personality disorders, your name sounds vaguely evil. Have you ever considered changing it to something a little peppier?

Could be worse, but I have considered writing under a pen name, which I would want to evil up a bit. Maybe go with something like A.Z. Trumpenstein? No. I mean, I want to go evil but maybe not that evil. Devin Hunter is good enough.

So, you’re into crystals. What’s up with that?

Yeah, I like shiny things. It’s sort of a problem.

You’ve mentioned on Twitter that you have a book on crystals coming out next year. Are there any subliminal messages hidden in the text that readers should be aware of? Or would you rather surprise us?

I mean, I am not not saying there are any. However, page 93 is actually a vortex to the hidden temple of Scion the Majestic. But you do have to roll a D8 and a D20 made from rejected quartz skulls to determine which level of Mirdork you will land in, which is only going to happen if Scion agrees to open borders, and quite frankly, we are still in negotiations. There seems to be a “Mirdork First” movement that has been sweeping the plane which is making tourism a little sketchy.

My copy of The Witch’s Book of Power was destroyed when the sprinkler outside my bedroom window backed up through the wall and saturated a bookshelf. Clearly, I was the target of a curse. Which of your boyfriends should I blame for this?

You live with three other male Witches. Do you guys ever just sit around and cackle?

All the time. Naked.

Hot. Although you know what else is hot? The exotic plants you trade and collect. Also, sometimes your hair is green. Are you a cabbage?

Are you saying I smell?

No. I’m saying that by affirming that you are not a cabbage, you have been officially initiated into Discordianism. Congratulations! Do you feel drunk with power now? Because that’s to be expected.

Moving on. Do your crystals and plants ever get jealous of each other?

Actually, I think they do. I end up rearranging a lot.

Do your crystals ever go missing, and your plants are trying really hard to look innocent, but you totally suspect a coup?

They don’t go missing, but things do end up knocked over. Or sometimes they just don’t seem happy.

Plants can be jerks like that. But hey! You were once on a game show. Based on that experience, did you feel snubbed when the producers of Jeopardy! didn’t ask you to guest-host?

I would have been a kick-ass Jeopardy! host. There’s still hope.

If you had to select one of our mutual acquaintances and talk trash about them, why would it be Michael Thomas Ford?

I have it on good authority that he gets totally sloshed on his own hooch, dresses up like Dolly Parton, puts on a pair of roller-skates and a one-piece bathing suit, and then torments his neighbors on new moons. Apparently, he skates around their houses singing “Jolene” into a hairbrush but can’t ever make it through the whole song, on account of he lives in the middle of nowhere, and they all have gravel driveways.

One time, his skate got stuck, and everyone thought it was a sasquatch because of the screams. They were too afraid to leave their house to investigate, so no one found him until the following afternoon. When they did, his wig had been stolen by a squirrel to make a nest and his beard was stained rose pink from the lipstick.

Turns out that dollar store lipstick is not “all day” like it says on the tube.

In a series of private Facebook messages, you recently said to me, and I quote:

Pancakes need a pat of butter.

This was an uncharacteristic display of vulnerability. What do you have to say to fans who are now disillusioned by the chink in your normally invincible facade?

I, too, am a normal guy. Sometimes I forget to put butter on the shopping list.

What advice would you give to enthusiastic young Witches who don’t quite have their shit together?

Life is a never-ending quest to get your shit together. Be kind to yourself and others and you’ll figure it out.

I also don’t quite have my shit together. Does this advice apply to me as well?

Honestly? The best advice I have for this sort of thing is to treat yourself like you would if you were your own best friend. Think about it, if your best friend comes to you in need of guidance or advice, you likely give them pretty good advice. Now do that for yourself and take your own medicine.

Funny story: Michael Thomas Ford actually is my BFF. If he stops speaking to me after I publish this, will you be my new BFF?

Mine too, Devin Hunter. Mine too. 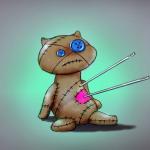 September 9, 2021
In Which the Witch Understands Why the Maids Always Quit
Next Post

September 21, 2021 The God of Sea Snails, and Other Queer Myths
Browse Our Archives
Related posts from Fivefold Law