I’ve been condemned to hell twice in the last week and a half, and I still have the weekend ahead of me. I’m sure I’ll get another 6-7 emails from readers who think I’m doomed, so it’s not shaping up to be a good week for my eternal salvation. In case you weren’t on the internet over this past week, an interesting thing happened. First, John MacArthur condemned thousands of charismatic Christians to hell for blasphemy of the holy spirit at his conference, Strange Fire. Our good ole friend, Mark Driscoll crashed the party in a publicity stunt for his new book, while clothing the stunt as an effort for peace.

Apparently, Mark wasn’t upset that MacArthur was condemning thousands of Christians to hell– he was just pissed because he didn’t think of it first.

Mark, deciding to get in on the send-people-to-hell action, went home and penned a blog post that also condemned thousands of Christians to an eternity of getting snapped with rubber bands wile listening to fingernails on a chalk board and being slow roasted over an open fire. Not to be outdone, Mark stamped an interesting group of Christians hellbound– one that would include some shocking names, including: Jesus, his disciples, all the Christians in the first 400 years of Christianity, Martin Luther King, nearly every Christian martyr in history, and well, me too.

At least I got lumped in with good company this time.

Those Mark thinks are going to be slaughtered by Jesus?

In his post (which you can read in entirety, here) Mark engages in some of the worst exegesis I’ve ever seen regarding the issue of nonviolence in an attempt to throw some red meat to his audience, arguing that those of us who believe in Christian nonviolence have made Jesus into a “pansy and a pacifist”. Mark builds his argument through citing Old Testament violence, completely skipping the nonviolent commands of Jesus and Paul, and moves straight to a horrible exegesis of the end times.

Which, really isn’t his fault– he’s just a product of a violent education. Mark attended a seminary where all professors are required to sign that they believe in a violent eschatological sequence, a theological framework that I’ve covered at great length in previous posts. Jesus taught that violence only begets more violence, so it naturally flows that pro-violent seminaries produce violent Bible teachers.

Instead of simply stating that he rejects this aspect of the teachings of Jesus, Mark takes it a step further– condemning those of us who affirm and teach this hallmark of God’s kingdom as false teachers who will one day be slaughtered by the Prince of Peace himself.

“Jesus is not a pansy or a pacifist; he’s patient. He has a long wick, but the anger of his wrath is burning. Once the wick is burned up, he is saddling up on a white horse and coming to slaughter his enemies and usher in his kingdom. Blood will flow… Some of those whose blood will flow as high as the bit in a horse’s mouth for 184 miles will be those who did not repent of their sin but did wrongly teach that Jesus was a pacifist. Jesus is no one to mess with.“

Apparently Pastor Mark is a go-big-or-go-home kinda guy, because by his argument, when Jesus comes back he’d have to slay himself– because Jesus not only taught nonviolence but said that embracing nonviolence is necessary in order to be called “children of your father in heaven”.

Thankfully, some of the other “false teachers” out there didn’t take Mark’s post lightly, and have responded with some fantastic pieces that are a little more intellectually honest than Mark’s (ok, a lot more). Here’s a quick plug of the two best responses, which I hope you’ll read each entirely:

Greg Boyd: Greg is basically the most brilliant Bible teacher I know. If you only read one of the resources here, this is the one. In it, Greg reminds us of what I’ve written about previously: Jesus overturned the OT laws on violence, and replaced them with a new ethic of total nonviolence:

“In fact, this “eye for eye” principle is called the lex tallionis (law of retaliation), and it’s at the foundation of all the laws of the OT that require violence against perpetrators. Yet Jesus repudiates this principle and replaces it with his teaching to never “resist [anthistēmi] an evil person” (which, by the way, means that we aren’t to respond to aggression with aggression, not that we’re to do nothing).”

“Mark rightly distinguishes between “killing” and “murder” in the Old Testament, but then he heroically leaps over biblical books in a single bound. After summarizing the “bloody Old Testament” as supporting “lawful taking of life, such as self-defense, capital punishment, and just war,” Mark jumps past the Sermon on the Mount, the life of Christ, Jesus’s prohibitions against violence in the gospels, and Paul’s commands against violence in Romans 12, finally landing on Romans 13 for a quick touch and go before he flies over the rest of Paul’s letters, Hebrews, and 1 Peter, ultimately arriving to the book of Revelation.”

I guess Mark and Johny Mac agree on principle, but just disagree on which Christians should be consigned to the eternal torment of the Evangelical version of hell.

Pastor Marky Mark would do well to re-check his scriptures re-discover the radical message of Jesus– where embracing nonviolence doesn’t make one a “pansy”, but a “child of our father in heaven”.

In the end, Mark and I do agree on something. In a follow up piece he released today regarding the publicity stunt, he said that we live in a culture that is progressively opposed to biblical truth. I agree.

Biblical truth is that we are called to emulate Jesus through a radical, nonviolent love of enemies, and the vast majority of American Christianity is diabolically opposed to that truth.

I pray Pastor Mark, and all those who reject this essential teaching of Jesus, will repent.

October 22, 2013
Why I Am Hopeful for the Future of American Christianity
Next Post 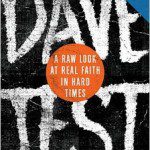 October 31, 2013 Walking Wounded as a Means to Build Community (The Dave Test)
Recent Comments
36 Comments | Leave a Comment
Browse Our Archives
Follow Us!