The Cross of Christ: The Symbol of a Tolerant God (my response to The Gospel Coalition)

Are Christians called to be intolerant of other viewpoints and lifestyles? Is God himself an intolerant God?

The Gospel Coalition says yes, on both counts.

Last week, the Gospel Coalition encouraged readers to reject the concept of being “tolerant” of others opting instead for the emulation of God’s supposed “intolerance”. The piece, which you can read in full here, claims in part:

“On the surface it (tolerance) seems to be a positive virtue, one that exemplifies the life of the Christian. But have you ever considered that tolerance is never encouraged in the Bible? The fruit of the Spirit includes love and kindness, but missing from the list is tolerance. In fact, Christians aren’t called to tolerance, because we serve an intolerant God.”

The piece goes on to list various Old Testament “examples” to demonstrate God’s intolerance, such as Sodom and Gomorrah, the Flood, and other violent stories which are notoriously misunderstood in relation to God’s character. The writer culminates with the example of the cross, citing the cross as the central example that God is, in fact, an intolerant God:

“Take a fresh look at the terrifying and uncomfortable reality of the cross. Here is an innocent man—whipped, beaten, nailed to a tree, bearing the sins of the world. For you. For me. Is this the picture of a tolerant God who ignores evil? No, this is a gruesome picture of divine wrath and judgment. The story makes no sense if God is a tolerant God.”

This post, and all posts like it, pains me to my core. There are a lot of things we need in this world, but the one thing we don’t need is new and improved portraits of an angry, violent, intolerant God. I’ve never fully grasped why folks like the Gospel Coalition are addicted to a portrait of God that paints him to look more like a drunken, angry x-boyfriend than who he really is.

Ironically, the cross isn’t about God’s intolerance, but his extreme tolerance. It’s not about his wrath; it’s about ours.

It didn’t have to be a crucifixion. The death itself, did not need to be an extremely violent, gruesome death.

We did that part.

Yet, in our own intolerance we weren’t able to tolerate the presence of God-with-us. Instead of tolerating a counter-cultural teacher and actually embracing him, and his teachings, for everything they were (and are), we brutally murdered him in perhaps the most horrid way we’ve ever carried out executions. 2,000 years later, we still love to crucify those who preach the radical message of “blessed are the poor” and “put away your swords”.

When we encounter the cross we see that we were the ones who behaved intolerantly– not God. When we look at the bloody Jesus on the cross, we see not a wrath that God inflicts, but the wrath that we too often carry out against others.

The cross was not about God’s intolerance; God had been tolerant all along. So tolerant, in fact, that he watched from heaven as we beat, whipped, spat upon, and crucified his son. It doesn’t get more tolerant than that.

Ironically, in contrast to the take of the Gospel Coalition, the cross of Christ is the ultimate testimony that God is an incredibly loving, patient, and tolerant God.

So tolerant, that he himself took on flesh and pitched his tent among us– declaring that he didn’t come to judge or condemn us, but to save us.

So tolerant, that even after we stripped him naked, tore the flesh from his bones, and nailed him to a tree, he said:

The cross of Christ is a dual picture of love and wrath, but not in the way we’ve been taught– it’s a picture of God’s unfailing tolerance and love being met with the wrath of our own selves. 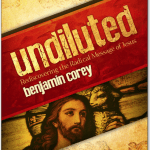 October 14, 2013
Help Me Pick a Cover for: "Undiluted-- rediscovering the radical message of Jesus"
Next Post

Progressive Christian
Principles Christians Should Remember In A World At...
The Official Blog of Benjamin L. Corey