For the Love of God
Muslim

Ayaan Hirsi Ali and the Challenge of Progressive Critique

The news that Brandeis University cancelled the honorary degree it was planning to give Ayaan Hirsi Ali has raised a storm of controversy. On one side  were Muslims applauding the move as an apt recognition that Ali’s narrative was, if not Islamophobic in itself, fodder for the cannons of the rabid Islamophobic right. On the other were those protesting that the withdrawal represented a betrayal of freedom of speech and a cowardly retreat in face of the howling of religious zealots.

Personally, I think Brandeis should never have thought about awarding Ali  with an honorary degree. Not because she is Islamophobic but because her “scholarship” is at best weak, and at worst fraudulent.  Ali left Denmark amid huge controversy because she lied about her name, her birthdate, the circumstances in which she left her home country, and her family history, including the fact that she was fleeing an arranged marriage . That alone calls into question her personal testimony about her life and the nature of the Muslim society she grew up in.

More importantly, reading Ali’s description of life in Muslim countries and of Islamic theology, it becomes immediately clear that she paints circumstances with an overly broad, overly polemical brush. For instance, she says things like, “The veil is to show that women are responsible for the sexual self-control of men.” If you’ve read the Qur’an, you know that the Qur’an doesn’t ever directly tell women to cover their heads, and it certainly doesn’t tell men that they have free reign if a woman isn’t wearing a scarf. It does tell both men and women to be modest, and admonishes them against sexual relations outside of marriage, and to treat one another with respect, as allies in the quest to live a moral life.

She also says things like, “” …Islam is a destructive, nihilistic cult of death,” which even those who haven’t read the Qur’an should recognize as overwhelmingly inaccurate —  a hyperbolic oversimplification of one militant interpretation and grotesque reduction of a billion people into that hyperbolic characterization. This is why Brandeis should never have honored her scholarship with a degree. Honor her guts, honor her commitment to women’s rights, but the integrity of her scholarship… no so much.

Progressivism, if nothing else, calls for nuance and  respect for different opinions. Indeed, it embraces diversity of thought and lifestyle as a positive good in and of itself. It calls for personal integrity and compassion for all.  Equally important, it makes no excuse for sloppy scholarship. Progressive theology and progressive interpretations of the Qur’an should not only be nuanced and welcoming of multiplicity, but also rigorous and self-consistent, without cherry picking or mercurial application of theological principles. Not only is it more honest and true to our principles, but it will be far more effective in winning hearts and minds.

What makes me saddest is that in fact women in many Muslim countries are terribly discriminated against, facing legal double standards, fgm, molestation, and second class citizenship. And that the Qur’an is sometimes used to justify terrible things and discriminatory laws, but people like Ali, because of the extremism in their arguments and rhetoric, actually hurt the ability of reformers, women’s rights supporters, and moderate or progressive theologians to address these issues. Rather she catapults Muslim societies and thinkers into defense mode, at which point change from within become extremely unlikely. Progressive and reform minded Muslims need to be aware of the impact of their exaggeration, their overly broad stereotyping, and harsh critiques, and how it actually impedes our ability to do the work we care about most – improving the lives of women, safeguarding children, and ensuring that all human beings have the ability to live in dignity with freedom of self-expression, freedom of conscience, freedom of thought, and freedom of religion. 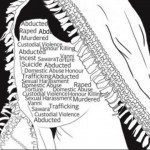 April 29, 2014 Islam and the Culture of Rape
Recent Comments
0 | Leave a Comment
Browse Our Archives
Related posts from For the Love of God