When I first became Muslim, I figured that I would fast Ramadan every year until I died. Then I got married and got pregnant. I worried about the effect that fasting would have on the development of my unborn baby. Research led me to believe that fasting while pregnant was not a good idea, for the baby or for me.  When I looked to the the Qur’an  for guidance I was relieved to read:

O You who have attained to faith! Fasting is ordained for you as it was ordained for those before you, so that you might remain conscious of God. Fasting is for a fixed number of days, and if one of you be sick, or if one of you be on a journey, you will fast the same number of other days later on. For those who are capable of fasting (but still do not fast) there is a redemption: feeding a needy man for each day missed. Whoever, voluntarily, does more good than is required, will find it is better for him. During the month of Ramadan the Qur’an was sent down as a guidance to the people with clear signs of the true guidance, and as the Criterion (between right and wrong). So those of you who live to see that month should fast it, and whoever is sick or on a journey should fast the same number of other days instead. Allah wants ease and not hardship for you so that you may complete the number of days required, magnify Allah for what He has guided you to, and give thanks to Him. (2:183-2:185)

It seemed pretty clear that this verse leaves plenty of room for not fasting when I was dealing with the difficulties of pregnancy and worried about the harm it might do me or my child. I could either make it up later, or feed poor people.

It came as quite a surprise when I met a lot of resistance to this idea from my fellow Muslims. People warned me that it was not permissible; that God would frown on being lax. They told me that women had been fasting while pregnant for centuries and no harm had ever come of it. These warnings were not simple statements of opinion, but forceful and strident arguments ; it was clear the women who admonished me believed fervently that I was going to hell if I didn’t keep the fast.

Now that I’m older, my ability to fast has been severely limited by a thyroid condition that requires me to take medicine daily an hour before eating. I fatigue more easily and my legs swell painfully if I don’t drink enough throughout the day.  Still, many people have tried to convince me that I should fast, even though it creates significant discomfort, difficulty, and hormonal imbalances, often with the implication (or direct accusation) that to do otherwise would be wimpy, self-indulgent, and a recipe for earning God’s wrath.

It is difficult enough to decide not to fast, and more so to forgo the deep spiritual cleansing and bonding with the Divine that fasting provides, the sense of community and fellowship with fellow Muslims as we share the experience of privation and dedication to piety along with morning and evening meals. To have that difficulty compounded by accusations of insincerity, weakness, discipline and a lack of knowledge and understanding of religious principles, makes it nearly impossible to engage with the community and to experience the blessings of Ramadan in other ways. Rather it leaves the person who does not fast, for health or any other reason, isolated, cut off from the community and by extension from the Divine.

This Ramadan, I am connecting to Allah through the Qur’an, through preparation of iftars for my children who are fasting, through increased emphasis on compassion and kindness in my words, and through increased charity. It does not feel the same as fasting; it cannot feel the same as fasting. But I hope that my fellow Muslim can understand and validate that for many, many of us this is how we dedicate ourselves to Allah during Ramadan, because fasting isn’t an option. I hope that as we grow as a community, we can stop second guessing the decisions made by our fellow Muslims and be truly welcoming of those who have made the choice to observe Ramadan in alternatives ways,  enfolding them in the fellowship of Ramadan, becoming for them a living example of God’s compassion. That’s one more way I plan to commemorate Ramadan this year. I hope you will join me.

Muslim
Ramadan and Poverty
For the Love of God 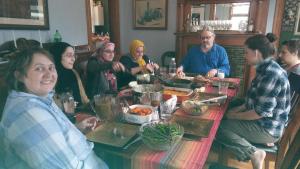 Muslim
Ramadan: An Ever-Varied Feast
For the Love of God