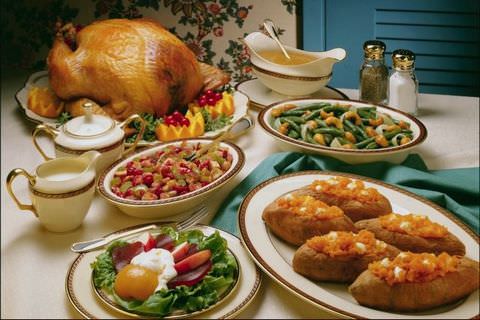 Last Thursday, along with millions of other Americans my Muslim family sat down to a big family dinner. We had turkey and mashed potatoes, sweet potatoes and pumpkin pie, all foods native to this land. My family has ancestors who came to America on the Mayflower. We also have ancestors who survived the Trail of Tears. At Thanksgiving, we take time to honor both histories.

Every year, on facebook, twitter, and in the news, we see anger and acrimony over the competing narratives of Thanksgiving. Was the genesis of the holiday a celebration of survival and cooperation where Native Americans and Mayflower settlers came together for food and game? Or a European colonist celebration of massacring a village of Native Americans? Is it a joyful celebration of gratitude for all the good in our lives? Or just another manifestation of American disdain for the original inhabitants of this land? Are those who celebrate callous and cruel or taking time out from daily strife to give thanks for the many things that America gets right?

Rather than engaging in culture wars over a beloved holiday, we’d be better off finding a way to embrace the tradition and the vision of cross cultural harmony it promotes, while acknowledging the history of ethnic cleansing, and dealing with ongoing issues like continued land appropriation, overly high rates of incarceration, inadequate access to healthcare and education, and endemic poverty.

In 1621 there was in fact a three-day thanksgiving feast with Mayflower settlers and the Wampanoag coming together to celebrate the harvest, settler survival and cross cultural cooperation with food and games. It is a historical reality, not the myth some would paint it to be. And it is also a fact that this thanksgiving celebration is the one we hearken back to every November not any of the others.

For instance, we don’t commemorate the thanksgiving celebration of 1623, which consisted of a religious fast giving thanks for the end of a long drought which had threatened the year’s crops. Pass the turkey and sweet potatoes, please!

Nor do we commemorate the thanksgiving feast of 1637 celebrating the end of the Pequot war which was achieved through the horrific destruction of a Pequot village occupied mostly by women and children. It was a terrible massacre, but let’s be truthful: It is not uniquely horrific in the history of wartime slaughters, nor does anyone celebrate this massacre today. Indeed the vast majority of people celebrating Thanksgiving feel shame regarding the treatment of the native population by European settlers and the American government.

Over the years Thanksgiving has also been a celebration of Patriot victories over the British in the War for Independence, gratitude for the ratification of our Constitution, a commemoration of Union victories during the Civil War that were pivotal to keeping our nation a single entity, and a moment of gathering our strength before plunging into WWII.  Again, we do not commemorate any of these celebrations when we sit down to Thanksgiving dinner.

Native Americans are right to complain that the current narrative of thanksgiving is naive, incomplete, and hurtful. To commemorate a joyful occasion of mutual cooperation and peaceful coexistence while neglecting the subsequent history of land theft, betrayal, and ethnic cleansing is disingenuous at best. At its worse, it’s a willful blindness and dismissal of an unpleasant past for which we need to make amends. Those of us who celebrate Thanksgiving ought to incorporate acknowledgement of that subsequent history into our celebrations. All of us should take concrete action to support Native American populations and their needs today, whether through political action, support of organizations such as the First Nations Development Institute, or charity, etc.

Equally important, we as a nation need to recognize that the populist narrative of Native Americans living in idyllic harmony with one another and nature in a bucolic land of plenty is as hollow and false as the simplistic narrative of Native American – Pilgrim cooperation. The 1637 massacre that is brought up over and over again was the culmination of the Pequot war. And, no, the story of that massacre is not just a story of colonial violence.

The Pequot had been aggressively expanding their territory into areas controlled by the Wampanoag, Mohegan, Narragansett, and Algonquian tribes. They not only attacked their native american rivals, but also the Europeans, mostly British, who had trade relations with those tribes. In turn the Wampanoag, Mohegan, Narragansett and Algonquians enlisted their trading partners in retaliating and preventing further attacks.  Similarly, the Pequot and associated tribes enlisted the Dutch, who were their trading partners, to fight on their side. Naturally, the Dutch and the English were eager to minimize each other’s influence in the “New World” and so things grew into a war.

Archaeological evidence and oral history document that well before European settlers arrived on the Atlantic coastline, Native Americans engaged in armed conflict for land, hunting grounds, farmlands, even vengeance. In short, they weren’t that different from any other human civilization.

We’re All in This Together

Coming back to modern day… America needs to come to grips with it’s past. Native Americans are and were humans endowed with the same inalienable rights as any other human. European settlers violated those rights over and over again. More importantly, our government continues to violate those rights to this day. We need to do better, America. Idealized history on either side doesn’t help the process. Acknowledging the human flaws, errors, and even evil can help us close divides and move forward to a better future.