With the disgusting acquiescence of the Russian Orthodox bishops, Vladimir Putin has accomplished what Sarah Palin, Franklin Graham and Michele Bachmann could only dream of doing in America. He’s made it okay to persecute gay people people in Russia. As Adam Lee notes, Putin has built his power base of corruption and terror with the help of the religious and conservative elements of his society. He’s become expert at courting the alliance of the Russian Orthodox Church. And here in America conservatives are lining up to defend Putin. For instance writing in The American Conservative, in an article called Culture War Goes Global, (August 13, 3013) Patrick J. Buchanan writes:

As Father Regis Scanlon writes in Crisis Magazine, in 2005, Pope Benedict XVI reiterated Catholic doctrine that homosexuality is a “strong tendency ordered toward an intrinsic moral evil,” an “objective disorder.” That homosexual acts are unnatural and immoral remains Catholic teaching. Thus, if we seek to build a Good Society by traditional Catholic and Christian standards, why should not homosexual propaganda be treated the same as racist or anti-Semitic propaganda? …. “The adoption of Christianity,” declared Putin, “became a turning point in the fate of our fatherland, made it an inseparable part of the Christian civilization and helped turn it into one of the largest world powers.” Anyone ever heard anything like that from the Post, the Times, or Barack Hussein Obama? 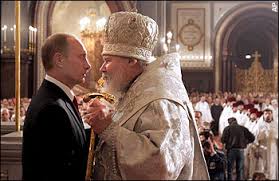 In my new book is And God Said, “Billy!”I invented a character of a Russian Orthodox monk who is open, enlightened and pro gay. I based him on several wonderful Orthodox priests and monks I know like Father Antony of St. Mary’s Orthodox church in Cambridge MA and monk and bishop Archbishop Lazar Puhalo in Canada, as well as several monks I met on Mount Athos in Greece. Sadly in reality my monk is mostly a fiction, just as Fr. Antony and Lazar Puhalo are embattled minorities and often denounced as heretics or worse by conservative Orthodox in the North American Orthodox community of leaders.

I invented my monk in And God Said, “Billy!” for literary reasons, story reason and also because I wish it were so! In reality, unlike my fictional monk, who saves my character Billy, the leaders in religion these days, including Orthodox and evangelical religion, too often side with the oppressor. 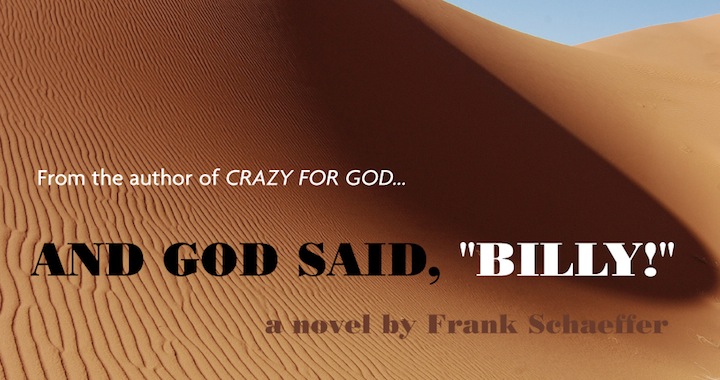 A parade of priests have denounced any who question Putin. The head of the Russian Orthodox Church, Patriarch Kirill, took to TV to say that “liberalism will lead to legal collapse and then the Apocalypse.” On another occasion, he called Putin’s rule “a miracle.” When convening the heads and senior members of 15 Orthodox Churches for an unprecedented meeting at the Kremlin in the summer of 2013, Putin praised the moral authority of the church. “It is important that relations between the state and the church are developing at a new level,” Putin said in televised remarks, with Russian Orthodox Patriarch Kirill by his side. “We act as genuine partners and colleagues to solve the most pressing domestic and international tasks, to implement joint initiatives for the benefit of our country and people,” he told the clerics.

Alongside Kirill, those present included Patriarch Theodore II of Alexandria, Theophilos III of Jerusalem and Ilia II of Georgia. Also present were the heads of the Bulgarian, Serbian, Polish and Cypriot Orthodox Churches. Together they represented more than 227 million faithful. To my knowledge not one American Orthodox bishop protested this meeting. I’m reminded of the silence of most of the German churches during the rise of Hitler.

As a member of the Orthodox Church, in this case the Greek Orthodox Church, I’m ashamed. Where are the voices of Orthodox leadership, not only in Russia but here, denouncing this awful man and the terror he’s unleashing against gay men and women? Putin has presided over show-trial prosecutions of political opponents and reformers. He’s used the full weight of his government against artists who mock religion. He’s encouraged the liquidation of crusading journalists who have been beaten and murdered. Putin and his government may have been directly involved in at least one such killing. 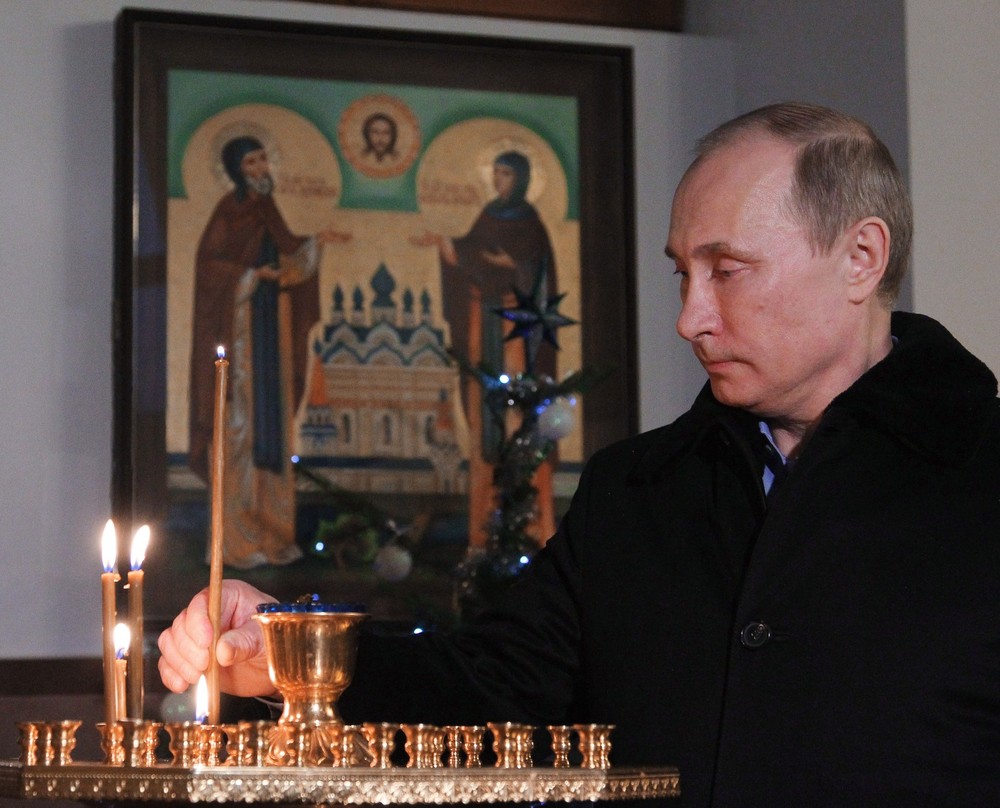 Now with the approval of the Russian bishops Putin is inventing a new invented enemy to distract attention from his fascist take over of Russia: Russia’s LGBT men and women. As Adam Lee, a writer living in New York City points out in an article published by Alternet, Putin’s “parliament” passed increasingly draconian anti-gay laws. Russian activists have even been arrested for just holding up a signs reading “Gay is normal.”

A bill now under consideration would take away children (both adopted and biological) from gay and lesbian parents. With the Russian Church, parliament and Putin saying that LGBT people aren’t fully human, homophobes in Russia are emboldened. The torture and murder of gay people, by gangs of skinheads assaulting gay-rights protestors in public, with the police looking on,is happening. And American evangelical Christians think this is all great. So, apparently judging by their silence, do American Orthodox church leaders.

NOW American evangelical and Roman Catholic right-wing haters are climbing aboard the Russian hate parade .As cited by Adam Lee we find that–

The religious right is working to export American-style culture war hate. The far right in America is publicly approving the Russian murder/torture/expelling and harassment of gay men and women. Where are the Orthodox bishops speaking out and denouncing the Russian church for colluding with this regime? Where are the evangelical leaders in the big Christian colleges, the publications, like Christianity Today, and World magazine calling out the evangelicals working to make Putin’s terror acceptable to Americans?

I’m grateful to Senator John McCain for telling it like it is in an oped he wrote exposing Putin. I’m shocked by the silence of people calling themselves Christians, most especially the leaders of the Orthodox Church worldwide, not to mention the anti-gay bigots who run the religious right here in America. Truth is, they can’t get away with the level of hate practiced in Russia against gay people, but I have the suspicion that right wing Christians in America and maybe some of our Orthodox bishops, wish they could similarly crush our gay brothers and sisters here, and are vicariously standing right there next to the skinheads of Russia and putting in the boot on defenseless human beings. All in the name of Jesus of course.

Frank Schaeffer is a writer. His new book is And God Said, “Billy!” Click HERE to buy it for only $3.99 on Kindle (available in paperback too).

September 20, 2013
Why I Just Asked Nadia Bolz-Weber to Marry Me or at Least Let Me Tattoo Her Face on My Chest
Next Post

September 27, 2013 I Blame God For the Shutdown
Recent Comments
1 Comment | Leave a Comment
Browse Our Archives
Related posts from Why I Still Talk to Jesus -- In Spite of Everything

News and Politics
When He Fired Comey -- And Lied about...
Why I Still Talk to Jesus -- In Spite of Everything

News and Politics
Trump Is Delivering on the Religious Right's Evangelical...
Why I Still Talk to Jesus -- In Spite of Everything

News and Politics
Is Franklin Graham gay "but in a state...
Why I Still Talk to Jesus -- In Spite of Everything

The Man Who Found Success by Saying “Yes”...
What if you trusted the flow of life enough to completely let...
view all News and Politics blogs
What Are Your Thoughts?leave a comment