I Blame God For the Shutdown

I Blame God For the Shutdown September 27, 2013 Frank Schaeffer

I understand the delusional thinking leading to the potential government shutdown. I understand it from the from the inside and better than the editors of the New York Times do. See, they leave God out of the equation. Rational people just don’t “get” holy war.

I’ve spent the last twenty-five years writing my way out of my false past certainties. My latest attempt to explain myself to myself is my book about religious delusion: And God Said, “Billy!” Yet in spite of the therapy of writing five novels and many nonfiction books that describe my tortured journey from fundamentalism to a fact-based way of looking at the world, I keep being reminded of my old self.

When I see Ted Cruz and the forty Tea Party extremists in the House grandstanding and ready to plunge the world economy into a tailspin I understand who they are and why they’re seemingly crazy. You see thirty years ago I was one of them. More over without my late father’s work energizing the religious right the Tea Party as we know it would never have emerged from the swamp of American politics to haunt us.

Readers of the New York Times have had the right wing delusional echo chamber explained to them. Most recently Nicholas D. Kristof (Suffocating Echo Chamber, NYT Sept. 26,) wrote about the deleterious effect of the closed circuit thinking of Fox News, the talk radio hosts and other culture warriors. Kristof‘s emphasis in his excellent column was on the political consequences of far right delusional thinking that’s literally threatening our economic well-being by threatening a government shutdown.

But what his article did not address is the deeper question of how it is that a large minority in our country got into the habit of mind that accepts alternative realities as par for the course.

The reality based community suffers from its own version of closed circuit thinking. Ironically it’s their reasonable commitment to reason that blinds many people to what is underlying our poisonous political climate on the right wing fringe.

What the reality-based community, especially in our media savvy centers of intellectual life forget, is that a big chunk of our population has been groomed from birth to embrace delusional thinking.

Put it this way: you can’t understand who supports and voted for Senator Ted Cruz and the forty extremists in Congress holding the rest of us hostage, unless you first understand why the Creation Museum has so many enthusiastic visitors. When they are there they can learn how dinosaurs cohabited the earth with people and why the planet is only six thousand years old, sort of the scientific equivalent to claims that President Obama is a secret Muslim who was born in Kenya. 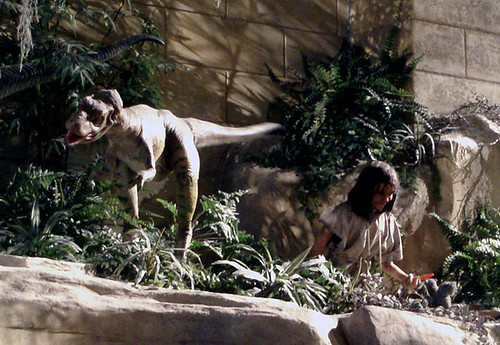 Until the root of myth-based political thinking is admitted and understood it can’t be addressed. Pointing out that the right lives in an echo chamber solves nothing. The point is why?

From the alienated point of view of his Fox News audience Cruz and the Tea Party congressional extremists are doing what Jesus would do. It’s all about angry faith not reason.

I know. I grew up in the 1950s and 60s as the son of fundamentalist Protestant missionaries. In the 1970s and 80s my late father, Francis Schaeffer, became a leader of the religious right. He’s been credited by historians as being the founder of the Protestant wing of the anti-abortion, movement along with our family friend Dr. C. Everett Koop. Koop, Dad and I made the film series “Whatever Happened to the Human Race?” that along with its book companion, called on evangelicals to take action on the so-called life issues.I became Dad’s young nepotistic sidekick. Soon I was speaking to tens of thousands of people at places like the Southern Baptist convention. I even preached from Jerry Falwell’s pulpit and was a frequent guest on Pat Robertson’s 700 Club.

Dad and I counted on our audience’s theological thinking – thinking we sincerely shared — to open them to political and economic theories like our good personal friend Congressman Jack Kemp’s ideas he was spouting about “supply side” trickle down Reaganomics. We asked people to accept this alternate reality as faith-based. My parents were invited to the White House by presidents Ford, Reagan and Bush. I often visited Congressman Jack Kemp’s home and met Bob Dole, Henry Hyde and the other leaders of the Republican Party.

The question they asked Dad and me boiled down to this: “How do we get blue collar Roman Catholics and non-political apathetic evangelicals to vote for us?” Our answer was, “You get these folks mad about something.” We helped craft the social litmus test approach to politics that became the culture wars. Facts weren’t the point, belief was.

The congress people threatening the shutdown count on the kind of voters Dad and I motivated to fear, even hate our government—on grounds of religious conviction. People like us helped turn policy debates into absolutist stands with no room for compromise.

To those forlornly appealing to reason I’d say that you’d do well to remember that at the Creation Museum they have displays of Noah loading the animals onto the ark and those animals include dinosaurs. And these displays are presented as literal – dinosaurs and men all created in six days at the same time.

Reason-based Americans need to address non reasoning America on its own terms. Those terms are about something that makes many reason-based people feel uncomfortable: religion. The real issue facing us in a threatened shutdown isn’t government or economics. The real issue is what it’s always been in America since our founding: religious delusion, and the search in all the wrong places for philosophical presuppositions that give our lives meaning.

It’s not about the economy stupid, here in America it’s always about God.

Frank Schaeffer is a writer and author of And God Said, “Billy!” on Kindle and NOOK for $3.99 or in paperback.

September 29, 2013 "AMERICAN JESUS" -- The Wounded Subculture of American Religion
Recent Comments
0 | Leave a Comment
Browse Our Archives
get the latest from
News and Politics
Sign up for our newsletter
POPULAR AT PATHEOS News and Politics
1

For Keith Jarrett
Keith Jarrett is a legendary pianist and composer who is part of...
view all News and Politics blogs
What Are Your Thoughts?leave a comment
Copyright 2008-2021, Patheos. All rights reserved.