Imagine if God answered these Christian prayers about abortion…? 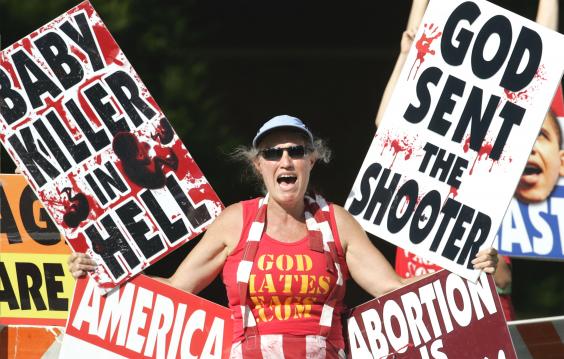 “For those who would like to see fewer abortions, perhaps it’s time for prayers of a different sort,” writes Valerie Tarico in AlterNet. Tarico then makes 7 suggestions in her article: “The Peculiar Role Prayer Plays for the Christian Right in Its Crusade to Make Abortion Illegal.”

Tarico’s list brings up an interesting point not just about the politics and the hypocrisy of the religious right, but about the odd Christian belief that human justice must somehow balance God’s apparent indifference to human life.

Anti-abortion activists call for 40 Days for Life each year. Protesters gather in public prayer loudly asking God to stop abortion, reverse Roe v. Wade and change women’s minds. Here is what the “pro-life” community of agitators do NOT pray for. If they did offer these prayers they might wind up not only questioning their anti-abortion activities but doubting their most basic theological beliefs.

1. Pray that God will keep all women healthy during pregnancy, eliminating pregnancy conditions that maim and kill. Some abortions are provided to save a woman’s health or life; for example, if her blood pressure spirals out of control in a condition known as eclampsia….

2. Pray that God will stop fetus formation from going awry so that abortions for fetal defects become unnecessary. …Biologists estimate that at minimum two-thirds of human embryos either fail to implant or else spontaneously self-abort after implantation, many because of mutations and other flaws in embryo production.

3. Pray that God will stop impulsive young teens from ovulating or producing viable sperm. Close to 80 percent of teen pregnancies are unintended, and about a third of these end in abortion….

4. Pray that God will prevent parents who are financially strapped from getting pregnant when they don’t want to. In developing countries 18,000 children starve to death each day. Most of these children are born from unintended and unwanted pregnancies… Sixty-one percent of abortions in the U.S. are performed for women who already are mothers and want to devote their love and resources to the children they already have.

5. Pray that God will ‘shut that whole thing down‘ in cases of rape and when women are pressured or forced into pregnancy. Some Christians have suggested that a rape baby is a blessing. Others describe pregnancy after rape as a “silver lining.” Indeed, one might point to all of the rape babies in the Bible who are born from sexual slavery or other situations that lack free and full consent (including Jesus himself)….

6. Pray that God will end in utero transmission of Zika, toxoplasmosis and German measles. … In fact, why not pray that God renders such pathogens extinct? Many churches teach that he drowned the dinosaurs in a world-wide flood; surely making a virus or parasite go extinct is easier than doing the same to a Tyrannosaurus.

7. Pray that God will more fully exercise his own role as all knowing, all-loving aborter-in-chief. God, as I said, already rejects or aborts over two-thirds of budding embryos. Though it’s sometimes sad, spontaneous abortion is often merciful and wise. Scientists now understand that this culling process weeds out many ill-fated pregnancies and helps to produce healthy babies…. Christians—including those who loathe induced abortion—tell us God’s ways are perfect even if they are mysterious…

October 20, 2016 POST 3RD DEBATE HERE IS ALL YOU NEED TO KNOW ABOUT TRUMP AND HIS FOLLOWERS: TRUMP WON'T ACCEPT THE ELECTION RESULT AND SO TRUMP’S PASSED FROM MERELY BEING HORRIBLE TO TREASONOUS
Recent Comments
0 | Leave a Comment
Browse Our Archives
Follow Us!