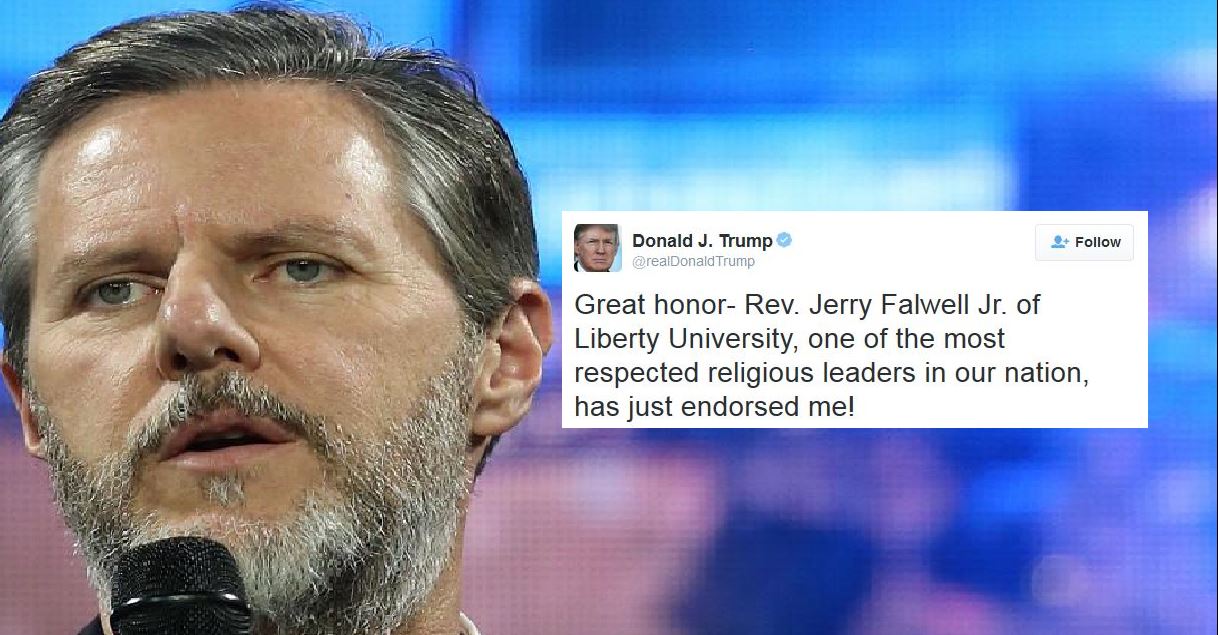 Turns out the last evangelical leaders are Mormons. As far as evangelical leaders supporting Trump are concerned, “Trump could have said that he brutally assaulted someone with a baseball bat and smashed the person’s head in, enjoying every minute of it, laughing about it in the retelling, or even that he had killed the person, and it might well be excused by many evangelicals leaders — just as Trump predicted about his supporters excusing him for shooting someone in the middle of Fifth Ave. As long as he agreed to help them put extremists on the Supreme Court, many evangelical leaders would likely dismiss the statements away as just words, and invoke their mantra that ‘we’re all sinners.’ That is truly twisted, deeply disturbing, and anything but moral.”…

So writes Michelangelo Signorile (Queer Voices Editor-at-Large, The Huffington Post) in “Many Evangelical Leaders Would Stick With Trump Even If He Were A Cold-Blooded Killer.” He adds:

Prominent evangelicals, .. seem hell-bent on even supporting a candidate who has bragged of engaging in violence if it suits them. Mike Pence, Trump’s running mate, is an evangelical Christian revered by evangelical leaders, having pushed through extreme anti-abortion laws and having signed a widely-condemned anti-LGBT “religious liberty” law in Indiana.

He dismissed Trump’s comments as “locker room banter” yesterday, agreeing with Trump, and said he “encouraged Donald Trump on Friday to apologize for them. He did. He expressed his personal remorse.”

As Signorile points out evangelical leaders like Franklin Graham have used the “we’re all sinners” argument mostly to explain away non-violent action, such as adultery and sexual indiscretions of politicians such as Newt Gingrich, on his third marriage after many infidelities. But regarding Tony Perkins’ and Franklin Graham’s rationalizations it should be noted that this isn’t about Trump’s “values;” it’s about violent actions. They are still supporting a violent predator.

Trump said in the tape that he pushes himself onto to women by kissing them “like a magnet,” making unwanted advances and grabbing them by their vaginas. The evangelical leaders like to say that Trump “apologized.” (Falwell,even said he was “contrite,” which is laughable.)

But Trump hasn’t even admitted to the actions he described in the tape, let alone express remorse for the actions. On his campaign website, in a video and at the second presidential debate on Sunday he apologized tepidly for the words themselves, insultingly insisting they are “locker room banter.”

When debate moderator Anderson Cooper said his words described “sexual assault,” Trump responded, “No, I didn’t say that at all, I don’t think you understood it at all,” before veering into a discussion of ISIS.

Most prominent evangelical leaders are sticking by the GOP nominee after the surfacing of the explosive tape that has sent his campaign into a spiral.

Reed criticized those tempted to sit out the election or vote for a third party candidate, Said Reed:

We must confront the choice before us and vote for someone who actually has a chance to become president. We dare not and we cannot surrender our vote during such an important election. Retreating to the stained-glass ghetto from whence we came, refusing to muddy our boots with the mire and muck of politics is not an option for followers of Christ. We are called to put away our “my way or the highway” pride, forsake cynicism and negativity, and participate fully as citizens, always cheerful, always winsome, always ready to defend our faith.

Reed argued that “on issue after issue on matters involving grave and intrinsic moral evil, there are stark differences between the two major-party nominees for president.”  Among the issues he cited was religious freedom, the Hobby Lobby case. Reed told the Liberty students not to be discouraged by the election.

Reed said evangelical Christians have it in their power to win elections if they would only turn out in greater numbers. Reed recalled that Falwell’s father, Jerry Falwell Sr., described his mission as getting people born again, baptized, and registered to vote.

Falwell Jr. has said before that Trump reminds him of his father — I knew Falwell well and young Falwell got that part right!!! His dad was a hate-filled liar — and in reality the similarity is getting stronger as a super-Bannonized Trump ramps up his attacks on Hillary and Bill Clinton and says that if he were in charge she would be in jail.

After all, it was Jerry Falwell Sr. who in the 1990s used his Old Time Gospel Hour to hawk videotapes that accused Bill Clinton of being involved in drug smuggling and murder! (No kidding).

Jerry Falwell Jr., Tony Perkins of the Family Research Council (FRC), which has been labeled as an ant-LGBT hate group by the Southern Poverty Law Center (SPLC); and James Dobson, founder of Focus on the Family, almost immediately went public defending Trump.

They seem to hold up Trump up as the new savior of America–sexual assault or not. They are embracing rape-culture as OK-With-Jesus… or as Falwell told Rita Cosby on WABC Radio in defending Trump in the aftermath of the tape. “We’ve all done things we wish we hadn’t. “We’re never going to have a perfect candidate unless Jesus Christ is on the ballot.”

Compare the evangelical “response” to Trump–we don’t like him but we hate Hillary!–to the clear eyed response from the so-called Mormons. Contrast Franklin Graham’s ass-kissing of pure evil, with a clear and moral editorial in the Deseret News, the Utah-based newspaper owned by the Mormon Church, which called for Trump to leave the race following the revelation of the tape.

The editors were clear that they weren’t speaking as leaders of the Church of Jesus Christ of Latter Days Saints and hadn’t consulted them. But it’s a bet they were expressing the same sentiments as the Mormon leaders. Turns out the Mormons are the last actual evangelicals in America.

…[T]oday we call on Donald Trump to step down from his pursuit of the American presidency.In democratic elections, ideas have consequences, leadership matters and character counts.

The idea that women secretly welcome the unbridled and aggressive sexual advances of powerful men has led to the mistreatment, sorrow and subjugation of countless women for far too much of human history.

The belief that the party and the platform matter more than the character of the candidate ignores the wisdom of the ages that, “when the wicked beareth rule, the people mourn.” (Proverbs 29:2)

…history affirms that leaders’ examples either elevate or demean the lives of those being led. …The most recent revelations of Trump’s lewdness disturb us not only because of his vulgar objectification of women, but also because they poignantly confirm Trump’s inability to self-govern.

What oozes from this audio is evil. We hear a married man give smooth, smug and self-congratulatory permission to his intense impulses, allowing them to outweigh the most modest sense of decency, fidelity and commitment. And although it speaks volumes about sexual morality, it goes to the heart of all ethical behavior. Trump’s banter belies a willingness to use and discard other human beings at will. That characteristic is the essence of a despot.

Nor is this an isolated incident. … The Associated Press “interviewed more than 20 people — former crew members, editors and contestants — who described crass behavior by Trump behind the scenes of the long-running hit show.”

In the face of these revelations, it is disheartening to see otherwise decent individuals now attempting to defend Trump’s talk, dismissing it as mere “locker room” bravado. … America’s locker rooms deserve better.

When Donald Trump’s running mate Indiana Gov. Mike Pence visited Utah and met with members of the Deseret News Editorial Board, he assured us that Mr. Trump was a “good man” who held “the ideals and values” of Utahns. Likewise, while visiting the Beehive State, Donald Trump Jr. told us that his father was running because of the “values held dear in this community.”

Considering his conduct and comportment, we do not believe Trump holds the ideals and values of this community or this paper. We are grateful for the courageous decision by many of Utah’s leading Republican politicians to renounce the top of their ticket.

…As the next few consequential weeks unfold, we trust the American people, as they vote their conscience, will provide a clarion call for sound ideas, true leadership and proven character from our next administration and Congress.Trump cannot answer that call. We ask him to step aside.

“Evangelical” leadership has passed to the much-derided Mormons.

October 13, 2016 Liberty U Students Rebuke Jerry Falwell Jr. Over His Support for the Woman-Molesting Pervert Trump (The name Falwell and the words Sexual Assault will be linked forever…)
Recent Comments
0 | Leave a Comment
Browse Our Archives
Follow Us!

Overcoming Brain Blocks to Greater Abundance
In spiritual circles, there has long been much talk about the spiritual...
view all News and Politics blogs
What Are Your Thoughts?leave a comment
Copyright 2008-2020, Patheos. All rights reserved.