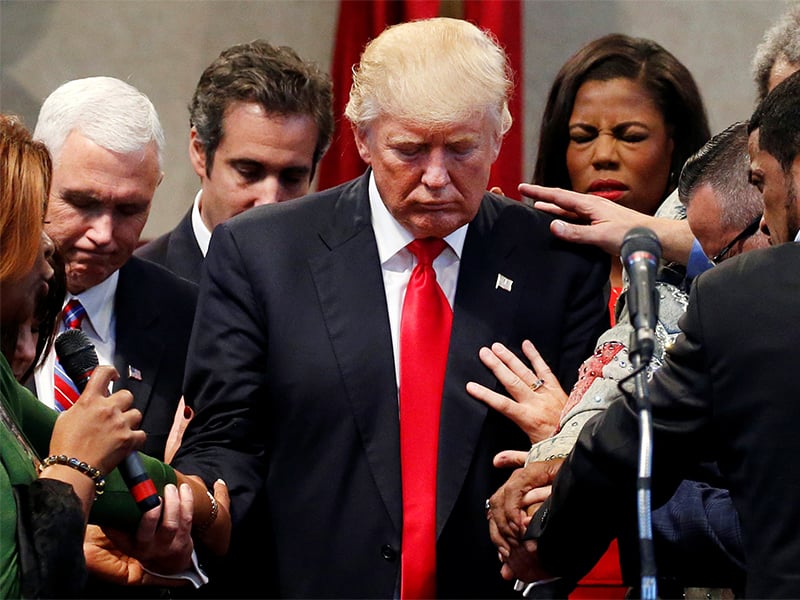 Eighty-one percent of white evangelicals voted for chaos. That chaos isn’t going to be the result of evil intent but something far worse: incompetence and ignorance married to self-blinding ego on a dizzying scale never before seen at a presidential level.

White American evangelicals gave up on Jesus coming back to set all to right… to burn gays forever, put black and brown people in their place, to melt Muslims where they stand, to lift good white people to Heaven in the “rapture…” to kill unbelieving Jews, gays and so forth. After all it’s been a long wait for Jesus to do all these things as “promised” in the Bible.

So many books on the End Times– so little action! Evangelicals got impatient. Like the tribes of Israel in the desert they erected a golden calf and worshiped it while waiting for Moses to came down from the mountain. Jesus just took too long to come back! Trump was already here!

…I have sad news for the white evangelical Trump voters: Jesus is never coming back and Trump isn’t going to save you either.

The Alt-Right insiders, Trump’s casino cronies, his son-in-law… none of these folks care about you white evangelicals. Trump called on your useful idiot leaders like James Dobson, Jerry Falwell Jr and Ralph Reed, the same way folks call someone to unplug a toilet.

The distance (in every sense of the word) between where Trump’s sitting and where your average white evangelical mom or pop is sitting is measured in light years.

As white middle class evangelicals wake up to their Medicare and Social Security shrinking (and then if Paul Ryan has his way) evaporating, as that son or cousin in the Army is sent into yet another losing conflict (by a fool who makes W Bush look wise by comparison), as police brutality against all Americans, including gun-carrying whites increases, as the worst in us all awakens with Trump’s permission to act out fear and hate… there will be second thoughts… even among many of the white evangelical faithful…

This substitute Jesus isn’t going to be very nice or smart. He will disappoint.

As the US economy goes the way of Trump U, Trump casinos and Trump steaks, even white evangelicals will realize–as they watch the market and thus their savings tank a few years from now–that they in fact are stuck here on planet earth for the duration.

Two years or less into the Trump era the entire edifice of white evangelicaldom will be shaken to its core by the blame they will endure from everyone sane.

You think there are a lot of young “nones” now? Just wait.

White evangelicals were Trump’s most solid voting block… A few years into his chaotic bizarre presidency shame is going to be the emotion most felt by them. The stigma will stick.

It will turn out that Trump in fact has “raptured” white the evangelical movement all right … to oblivion.

And Jesus still isn’t coming back to rescue the retirement savings of the aging white population that’s about to watch their lifetime of toil rendered as null and void as a service contract with an Atlantic City Trump casino.

November 14, 2016
Here is my latest interview on NPR today please listen as I explain the evangelical vote for TRUMP
Next Post

November 21, 2016 DO NOT MISS SNL'S "the bubble" : It's for "like-minded free-thinkers... and no one else!"
Recent Comments
0 | Leave a Comment
Browse Our Archives
Follow Us!

Stop Fighting
When humbled, we finally stop fighting—  against life, against the tide of...
view all News and Politics blogs
What Are Your Thoughts?leave a comment
Copyright 2008-2020, Patheos. All rights reserved.