Do NOT Miss This Explosive NEW Well Made Documentary Exposé of Trump’s Slimiest Alt-Fringe Cohort – Steve Bannon (If you’re Not Horrified You Don’t Have a Heartbeat) WATCH March 19, 2017 Frank Schaeffer 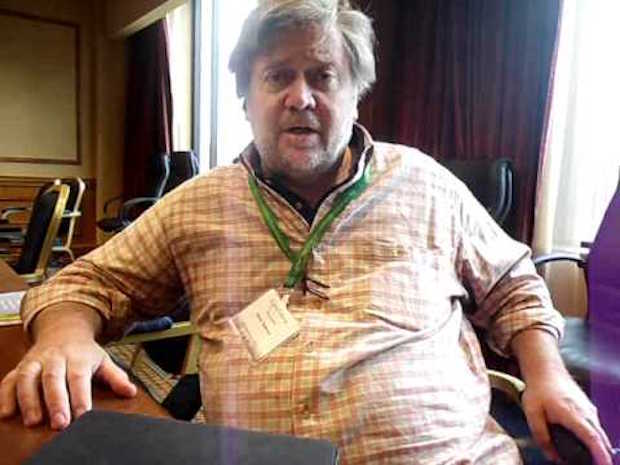 Steve Bannon is the slimy Alt-Fringe delusional brain behind brain-less and unstable and bizarrely confused Tweeter-Of-Lies “president”  Trump. And Bannon is a certified a right-wing extremist with a sickening penchant for the personal abuse of others and vile power trips. As Howard Fineman writes Bannon is:

A master of cunning, apocalyptic, xenophobic narrative, Steve Bannon has given Trump a grander mission ― that of saving the Christian West from Islam, materialism, Wall Street, Hollywood, the Ivy League and the “Mainstream Media.” Reared and educated in a blue-collar, conservative Catholic family in Virginia, Bannon’s radical medievalism fits Trump’s royal conception of himself. But the risk is that the president will remain oblivious to what is going on outside the reality TV show Bannon has designed for him to live in, or that Trump will think that he has the kind of kingly authority that allows him to ignore the best parts of the Founders’ vision of a pluralistic, secular and welcoming America.

In a new film for her TeleSUR program, The Empire Files, journalist Abby Martin exposes Trump’s chief strategist and his history of fanaticism, bigotry and profiteering.

“Steve Bannon has been propelled over the last year from fringe media outlier to top propagandist of the U.S. empire as Trump’s chief strategist,” according to The Empire Files. “From his Wall Street roots and apocalyptic film career to his cultivation of alt-right bigots at Breitbart News, Abby Martin exposes Bannon’s true character in this explosive documentary.”

Bannon, who served as CEO of Trump’s presidential campaign, honed his skills as the head of the far-right website Breitbart News. He proudly described the network as the “platform for the alt-right,” the white supremacist movement led by neo-fascists like Richard Spencer.

The Empire Files details how Bannon cut his teeth making hard-right propaganda films. These works led Andrew Breitbart to describe him as the “Leni Riefenstahl of the Tea Party movement.”

Please come to my FB page and WATCH my new 5-min video “America Dishonored” about Trump and Bannon https://www.facebook.com/frank.schaeffer.16

HELP ME DO MY BIT TO FIGHT TRUMP…by promoting  my new blog site. I’m publishing 2X per week, my art, videos, articles, commentaries, resistance to T to the end of this foolishness: read what you’ve missed so far… and join me HERE http://frankschaefferblog.com

March 19, 2017
Don't like Trump? Meet the 2 people who with their children (literally) put Trump in power
Next Post

March 20, 2017 America Dishonored
Recent Comments
0 | Leave a Comment
"Except that Rapture is not mentioned anywhere in the Bible, or in any other source ..."
Starsatyr Tim LaHaye is dead but his ..."
"Good article, but I believe a tad outdated now 4 years later. While the Moral ..."
Kirk Leavens An open letter to the Republican ..."
"Praying deconverted me. So yes, Christians, keep praying."
Captain Cassidy Evangelical and/or Post-Evangelical Christianity, “Progressive” or ..."
"ALL Christians voted for President Trump. On NOV 8 2016 the choice was do you ..."
Dry Loop The Case For Impeachment Grows
Browse Our Archives
get the latest from
News and Politics
Sign up for our newsletter
POPULAR AT PATHEOS News and Politics
1

4 Valuable Life Tips from Matthew McConaughey
Best known for his roles in romantic comedies, the more recent work...
view all News and Politics blogs
What Are Your Thoughts?leave a comment
Copyright 2008-2021, Patheos. All rights reserved.