Does the Bible Really Contradict Itself?

Does the Bible Really Contradict Itself? July 12, 2021 Frank Viola

In some recent progressive Christian blogs, the authors often argue that the Bible contradicts itself a great deal.

Some of these authors even go as far as to say that the Bible isn’t terribly reliable, and that certain things that God told Israel, for example, were . . . well . . . little fibs. “God really didn’t tell those people that. They had their fingers crossed behind their backs as they penned those claims.” Or so the thinking goes.

I find these sorts of explanations to be unconvincing at best. And they reflect modernistic Enlightenment rationalism (which governs the frontal lobes of those who flat-footedly reject Scripture) at worst.

While I don’t believe the Bible has a journalistic type of accuracy that most fundamentalists ascribe to it, nor do I believe that the Bible is some sort of magic book that will yield an answer to every conceivable question posed to it, I am convinced of the following:

(1) All Scripture is inspired by God.

(2) All Scripture is authoritative.

(3) All Scripture is completely true and wholly reliable.

In these ways, I stand with eminent scholars like F.F. Bruce, Craig Keener, N.T. Wright, Donald Guthrie, Ben Witherington, Howard Snyder, and many others too numerous to list.

That said, some of my progressive Christian author friends will sometimes use the accounts of the resurrection of Jesus as evidence of a “genuine” biblical contradiction.

But do the resurrection accounts really contradict each other?

A contradiction is a flat-out, mutually exclusive disagreement.

Suppose, for instance, you and I both witnessed a car accident. You said that the driver was thrown from his car 100-feet and died on impact. In contrast, I said the driver remained in his car and walked away with a few scratches on his head.

Either of us is fibbing or we are imagining. Or we are confusing a different accident with the one we both witnessed.

But if I said that the car was large, and you said it was small. Is that a contradiction? Well, that depends because “small” and “large” are relative. What I consider to be a small car you may consider to be mid-size car.

Or what if you said the car was totaled and I said it was banged-up bad. That’s not a contradiction necessarily, because we could be using different words to describe the same thing. That would be a case of semantics.

Consequently, when you compare all four resurrection accounts closely, you won’t find any contradictions. You will, however, find differences. Just as you do when real eye-witnesses describe the same event. It’s rarely if ever identical.

There are many so-called “contradictions” in the Bible that people claim which really aren’t. Those “contradictions” can be resolved rather easily if one examines the context, the original languages, the different ancient manuscripts, and the particular perspective of the author.

When one reads Scripture carefully, they will find that there are very few real contradictions in the Bible. The rest are different perspectives or spiritual paradoxes.

In one account, the New Testament says that Judas’ went out and hung himself. Consider these two differing accounts:

Matthew 27:5
Then he [Judas] threw down the pieces of silver in the temple and departed, and went and hanged himself.

Acts 1:18
Now this man [Judas] purchased a field with the wages of iniquity; and falling headlong he burst open in the middle and all his entrails gushed out.

This isn’t a contradiction. It’s rather two different perspectives of the same event.

Judas did hang himself, but he did so from a tree hanging over the field. Luke graphically details what took place after his hanging. Here’s how one person describes it:

“Judas’ dead body hung in the hot sun in Jerusalem. The bacteria inside his body began breaking down tissues and cells. A byproduct of bacterial metabolism is often gas. The pressure created by the gas forces fluid out of the cells and tissues and into the body cavities. The body becomes bloated as a result. In addition, tissue decomposition occurs compromising the integrity of the skin. Judas’ body was similar to an overinflated balloon, and as he hit the ground (due to the branch he hung on or the rope itself breaking) the skin easily broke and he burst open with his internal organs spilling out.”

In short, the differing accounts of Judas’ death in Acts and Matthew do not constitute a contradiction.

Genesis 1 and 2 is another example. In those chapters, we have two different versions of the creation account.

I’ve debated with atheists who used both of these examples (Judas’ death and Genesis 1 and 2) to “prove” to me that I can’t trust the Bible. When I was finished answering them, the head of one Atheist association said, “It’s exceedingly difficult to punch holes in your arguments.”

I point this out only to demonstrate that a follower of Jesus Christ doesn’t have to adopt the rational of atheists, agnostics, and Deists and concede that the Bible isn’t reliable. Nor do they have to escape into “don’t confuse me with the facts” lines of reasoning.

Again, while I don’t see the Bible has having a journalistic accuracy – meaning, there do appear to be a few very minor contradictions (mainly in some Old Testament numbers), the best scholars have shown that the Scriptures are reliable as historical documents.

F.F. Bruce argued the reliability of the New Testament with unassailable logic in his many books and scholars like John Goldingay and David Lamb have made it plain for the Old Testament.

An illuminating book I’ll recommend to you on this score is Alleged Discrepancies of the Bible.

There’s yet another reason why some think that the Bible contradicts itself.  It’s the fact that spiritual truth is paradoxical. And paradoxes run all throughout Scripture. Jesus, in fact, is the Ultimate Paradox since He is fully God and fully human. (HT to Kierkegaard.)

Here’s how Len Sweet and I put it in Jesus Manifesto,

“The truth is, most Calvinists live like Arminians (they hold themselves and others responsible for their actions). And most Arminians pray like Calvinists (they submit their requests to the will of God) . . .

The Christ who is truly (but only partially) present in our doctrine and experience is the true substance of the Christian faith. As for us, we will always “know in part” until we meet Him “face to face.”

Concerning the reality of Christ Himself, all the fullness of God dwells within Him. It is for this reason that every theological system breaks down somewhere. Every systematic theology, no matter how coherent or logical, eventually meets some passage of Scripture or passage of life that refuses to fit into it. Such passages have to be bent, twisted, and forced to fit the system.

Why is this? It’s because Christ is too immense, too imponderable, and too alive to be tied into any immovable system of thought constructed by finite humans.

Thus, He will always break out.

As Jeff Goldblum’s character said in the hit movie Jurassic Park—“Life will find a way.” (That was his response to the idea that scientists had created an ironclad, airtight system to keep dinosaurs from reproducing.) Jesus Christ is too alive to be caged in any human system. As Paul exclaimed in holy exasperation, “How unsearchable are His judgments and His ways past finding out!”

Life will find a way.

Jesus is not just one way, a better way, a pleasant way on a good day. He is the way.

Jesus is not just one truth, a higher truth, or a more personal truth. He is the truth.

Jesus is not just another life, a nicer life, a more abundant life. He is the life of God Himself.

In short, following Jesus doesn’t mean trying to create a weapons-grade theological system to analyze, explain, and contain Him. Neither does it mean trying to obey His teachings by the power of our own volition . . .

So, Christianity is not an allegiance to a complex doctrinal or ethical system, but a passionate love for a way of living in the world that’s rooted in living by Jesus, the way, the truth, and the life. Our theologies, doctrines, and subjective experiences are designed to flow organically from our loving relationship to Christ, but they are never to substitute for it.”

Point: If the Bible isn’t reliable, then putting my faith in the Person that all Scripture points to — the Lord Jesus Christ — is a bit shaky. But note, reliability doesn’t mean perfection. Every historical document that’s reliable in its account isn’t perfect. Meaning, there may be a few typos, grammos, imperfect wordings, and even scribal mistakes. But those don’t overturn nor negate the overall message of the document.

It’s the same way with Holy Writ. And because I believe that Scripture in inspired by God and thus constitutes God’s written Word, I won’t retract calling it “holy” . . . for “holy” means uncommon.

Nor am I ashamed of it.

For like Moses, those of us who follow the Master can rightfully take our shoes off when we approach the Living Christ to whom all Scripture witnesses.

Incidentally, this post is yet another example of those of us who have moved beyond evangelical. 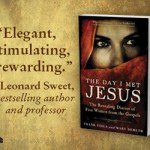 July 13, 2021 9 Lies the Media Likes to Tell About Evangelical Christians
Recent Comments
24 Comments | Leave a Comment
"As of this date - Nov. 10, 2020 - millions haven't "moved on" -- they ..."
Frank Viola Can Trump Defy Gravity & Regain ..."
"In response to the question about the possibilities of Trump ascending to a second term ..."
Christiane Smith Can Trump Defy Gravity & Regain ..."
"Jesus new covenant blood is the most potent unifying force on planet earth. The Cross ..."
John Campbell George Floyd and More Screwball Conspiracy ..."
"I'm surprised there have been no comments on this. I understand what Jim is saying. ..."
Kostya2 GENESIS 3 CHRISTIANITY and My Journey ..."
Browse Our Archives
get the latest from
The Deeper Journey
Sign up for our newsletter
POPULAR AT PATHEOS Evangelical
1

Steven Furtick is the Most Dangerous...
The Chorus In The Chaos
Related posts from The Deeper Journey

Evangelical
Where Evangelical Christianity Has Missed It
The Deeper Journey

Evangelical
I'm Looking for a New Podcast ....
The Deeper Journey

Evangelical
George Barna & The Shape of the Church...
The Deeper Journey

When moving up can drag you down
When I was a teen, I worked at a local restaurant as...
view all Evangelical blogs
What Are Your Thoughts?leave a comment
Copyright 2008-2021, Patheos. All rights reserved.