The truth can be shocking. And it’s no less so when one examines the spiritual life of one of the greatest icons of music — Elvis Presley.

What did Elvis believe about Jesus? What was his spirituality like? What did he think about God and did he have a relationship with Him?

The Seeker King: A Spiritual Biography of Elvis Presley by Gary Tillery is a remarkable book about the spiritual ideas and life of the larger-than-life personality, Elvis Presley. 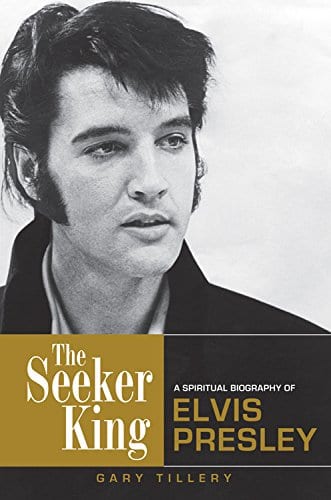 I found Tilley’s book to be fascinating on the one hand, yet profoundly sad on the other. And some of it was, well, shocking.

One of the quotes by Presley himself summarizes the book well,

“All I want is to know the truth, to know and experience God. I’m a searcher, that’s what I’m all about.”

Whether you’re an Elvis Presley fan or not, the story of this stellar figure is unique as it is unusual.

Tillery begins with Presley’s family, his childhood, his relationship with his parents, and his youthful fondness for singing gospel songs.

So Presley, no doubt, heard the gospel preached in his youth. It is unclear what kind of relationship Elvis had with Jesus growing up. However, when he rose to fame, Tillery paints a picture that describes the singer as not living according to the precepts of the New Testament in the area of sexual morality.

In the mid-50s, Elvis had skyrocketed into world fame.

After his mother passed away, Elvis turned to the Bible, reading it regularly. He also opened his mind to other possibilities. Kahlil Gibran’s book The Prophet became a favorite of his.

In fact, The Prophet was to become one of Presley’s most treasured books, a volume he would return to at different points of his life.

Tillery makes plain that Presley was seeking other avenues to truth aside from Jesus Christ and the Bible early in his career. I didn’t care to read all of the backstage gossip about how many women Presley allegedly slept with in Hollywood as well as before he went into the army. But if true, it shows that Presley’s off-camera life didn’t match the “good boy-clean cut” image he projected on camera.

Tillery goes into his romance with Priscilla, the ups, the downs, and the demise of that relationship. He talks about how he spent money, the many interesting tales about the “Memphis Mafia,” the Byzantine politics that surrounded the singer, the war games that Presley invented for entertainment, the famous meeting he had with the Beatles at his home, his desire to work for the CIA and his meeting with President Nixon, his relationship with various female movie stars of the 50s and 60s, how many of the people who were closest to him used him for their own benefit, and mostly, his spiritual search and frustration.

Geller was not a follower of Jesus. Instead, he was someone who followed new age ideas. His reading was vast, and he would give Elvis hundreds of books to read, from The Urantia Book, to works on Gnosticism, etc.

Elvis reportedly would have thousands of “spiritual” books shipped to him when he was on the road.

If nothing else, the book portrays Elvis as someone who was seeking. He was seeking meaning, truth, and the mission for his life.

I find the whole story of Elvis’ life immensely sad.

Here was one of the most handsome men who ever lived.

He was also among the most talented, both in singing and acting.

In addition, he was one of the greatest performers to breathe oxygen.

And he was also very bright.

As such, he was famous. No, he was beyond famous. Larger than life.

Everyone knows who Elvis is and was.

Because of all of the above, he had relationships with some of the most beautiful women in the world, including the gorgeous women of 1950s and 60s Hollywood.

He had every possession a person could ever want.

He was wealthy beyond any person’s dreams.

he was deeply lonely.

he was deeply isolated.

he was deeply depressed.

he was deeply bored.

he was deeply unfulfilled and in search of his mission in life.

and he was hooked on prescription drugs that eventually killed him.

Elvis looked down on using illicit drugs, but he had no problem using prescription drugs because he needed them to sleep and a doctor prescribed them.

When it was too late, he was alerted to the fact that they were killing him. But the damage was already done . . . the addiction too cemented to break.

If Tillery’s account is correct, Elvis’s views were more in line with universalism than with Christianity.

On the day he died, Elvis was reading a book on the shroud of Turin that Geller had given to him. In fact, Elvis’ cold body was found in the bathroom with that book on the floor.

No one knows what Elvis’ beliefs or relationship to God was at the moment of his untimely death. Only God knows.

Did he return to his roots in the AOG and turn to Jesus Christ? Did his heart turn to Jesus while he was reading about the shroud of Turin in the smallest room in his house, just before he passed?

For sure, Elvis was well aware of The Way. For Christ undoubtedly had been preached to him in the church of his childhood.

In one of his writings (perhaps one of you can give us the source), C.S. Lewis said that at the moment of a person’s death, they come face to face with truth and reality, and they can make a choice to respond to it or not.

I sure hope that’s true. For I’d like to think that many people, including Elvis, turned to Jesus Christ — the Way, the Truth, and the Life — in their last moment.

July 1, 2018
Two Short Videos You May Not Have Seen
Next Post

July 8, 2018 Warning: Christian Community Doesn't Work Without This
Recent Comments
0 | Leave a Comment
Browse Our Archives
get the latest from
The Deeper Journey
Sign up for our newsletter
POPULAR AT PATHEOS Evangelical
1

Evangelical
The Crisis of Faith
The Deeper Journey

Evangelical
Has the Lord Ever Done This In Your...
The Deeper Journey

Evangelical
The Rewards of the Kingdom
The Deeper Journey