We live in a day when what sells best in the Christian world are books, sermons, and television programs that are aimed directly at you — This Is Your Day, You Are the Reason for the Season, Become a Better You, It’s Your Time, and similar titles orbiting around the Youniverse.

It’s time to take all the arrows that point to you and bend them back to our Lord.

Behold the ill-starred Nazarene who went about “doing good and healing all who were oppressed by the devil.”

Behold the artisan from Galilee, the one who called Himself the “Son of Man” (which means “son of Adam” — “the human being”).

Watch Him as He is taken before Rome’s delegates in the city of Jerusalem. See Him standing before Pilate — rejected, dejected, bludgeoned, beaten, spat upon. Behold Him who created the heavens, the Lord of the universe, suffering the most horrific, gruesome form of torture that was ever invented by the human imagination.

Observe Him hanging on a wooden stake, dying a slow, hideous death, covered with blood — naked, mocked, and shamed. The Messiah has become a public spectacle that elicits the spinechilling, gleeful laughter of satan himself.

Watch death, the child of sin, emerge from the pit. With open arms, it darkens the wood of the cross and takes the Prince of heaven into its silent, hopeless domain.

The powers of Rome may have defeated the suffering artisan two thousand years ago, but in the end, He shall triumph. Christ shall subdue all things and put them under His feet, for upon that bloody hill, Jesus of Nazareth — the spotless, sinless man — defeated the powers of darkness and won for Himself the keys of death, hell, and the grave.

He is a Savior to the uttermost for our “guttermost.” He saves in every situation and at all times. There is no circumstance too hard for Him.

By Jesus’ resurrection, God the Father vindicated Him before angels, demons, and the human race to be the universally triumphant, sovereign Lord. This same Jesus now sits at the right hand of power, as a faithful high priest, tirelessly interceding for His own in the presence of God. He lives by the power of an endless life, and He never fails.

And one day, every kingdom, every ruler, every principality and power shall bow their mortal knees to the rejected Nazarene. He, the Lamb of God, the Lion of the tribe of Judah, shall reign in regal glory over everything in, below, and above the earth, in heaven.

He shall be the judge of all creation, and His kingdom shall never end.

In that day, Jesus the Nazarene shall be universally vindicated as the ruler of the kings of the earth. Humanity will meet the power of glory face-to-face, for when He appears, the world will see His divinity, His beauty, His majestic splendor, His perfect righteousness, and His complete holiness. He shall make all crooked lines straight as the earth’s rightful judge.

But more, all who follow Him today will share in the unveiled, unapproachable, indescribable radiance of God’s Son tomorrow — a greater glory than this world could ever comprehend.

Indeed, it will be His time, and He will have the last word.

The one foundation, the unshakable support of the universe is Christ, who upholds all things, and preserves in well-being all that has been firmly founded. We are all built upon him: we are a spiritual house bonded together by the Spirit to form a holy temple which is his own dwelling place, for he dwells in our hearts through faith.

Behold, He is coming with clouds, and every eye will see Him, even they who pierced Him. And all the tribes of the earth will mourn because of Him.

And being found in appearance as a man, He humbled Himself and became obedient to the point of death, even the death of the cross. Therefore God also has highly exalted Him and given Him the name which is above every name, that at the name of Jesus every knee should bow, of those in heaven, and of those on earth, and of those under the earth, and that every tongue should confess that Jesus Christ is Lord, to the glory of God the Father.

Look again at the craftsman from Nazareth.

Bow before Him, embrace Him, adore Him, and seek to know Him. He is available and closer to you than you can imagine. Jesus is your new tabernacle and temple.

If you really want to see God present, dwelling among you, if you genuinely want to worship God in all of His glory, if you truly want to receive that gift of wonder and see glimpses of divine glory, then come to Him.

Take your chances with the God of second chances. Jesus didn’t die just to take you out of hell and into heaven. He died to take Himself out of heaven and deposit Himself into you.

This post is a short excerpt from Chapter 10 of Jesus Manifesto.

December 11, 2019
Why I Gave Up Being a Talk Radio Show Host
Next Post 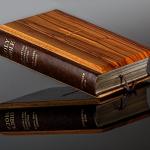 January 1, 2020 A Cure for Rapture Fever
Recent Comments
0 | Leave a Comment
"As of this date - Nov. 10, 2020 - millions haven't "moved on" -- they ..."
Frank Viola Can Trump Defy Gravity & Regain ..."
"In response to the question about the possibilities of Trump ascending to a second term ..."
Christiane Smith Can Trump Defy Gravity & Regain ..."
"Jesus new covenant blood is the most potent unifying force on planet earth. The Cross ..."
John Campbell George Floyd and More Screwball Conspiracy ..."
"I'm surprised there have been no comments on this. I understand what Jim is saying. ..."
Kostya2 GENESIS 3 CHRISTIANITY and My Journey ..."
Browse Our Archives
get the latest from
The Deeper Journey
Sign up for our newsletter
POPULAR AT PATHEOS Evangelical
1

Evangelical
How My Faith in Christ Shapes My View...
The Deeper Journey