The Way Back – An Interview with Phil Cooke

Phil Cooke is a friend. He’s written some great books in the past, and he’s come out with a new one co-authored with Jonathan Bock. It’s called The Way Back: How Christians Blew Our Credibility and How We Get It Back.

I caught up with Phil recently to discuss his new book. 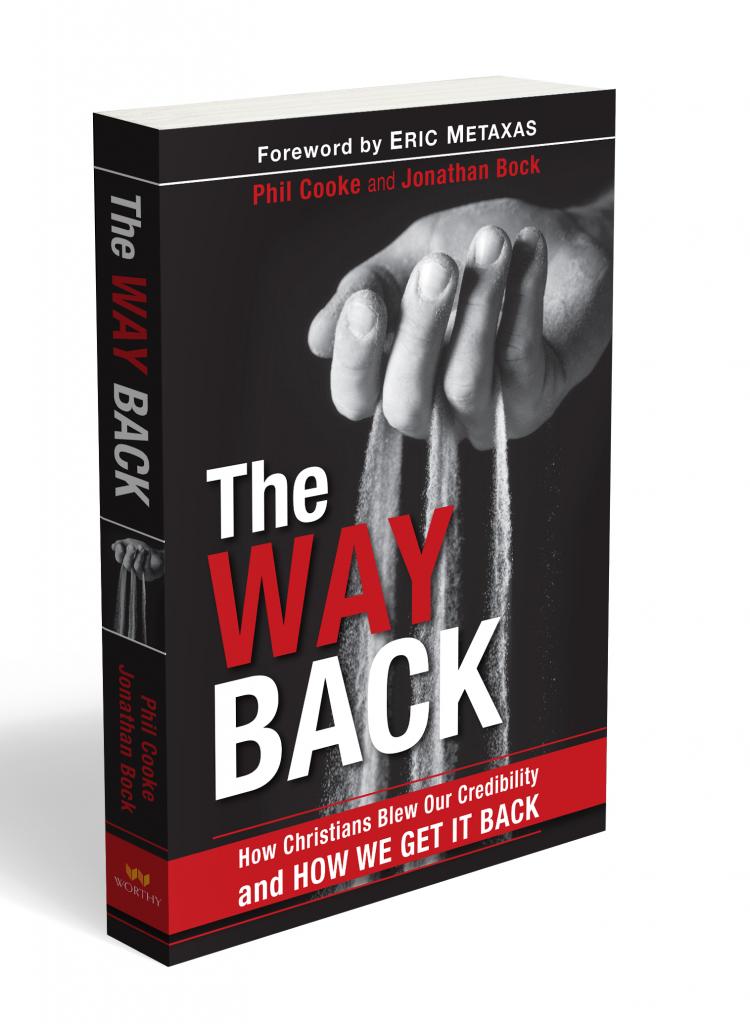 As all authors know, readers have limited time and limited money. So when they want to know what an author’s book is about, what they are really asking is, “How does your book benefit me? Why do I want to spend money and time on it? What’s the ROI?” How would you answer this question regarding your new book?

Phil Cooke: Honestly, “The Way Back” isn’t for everyone. It was written for Christians who see just how much the influence of Christianity is disappearing in today’s culture and want to do something about it. I have no doubt that everyone reading this understands what I’m talking about. Think of all the issues – prayer in schools, abortion, same sex marriage, religious freedom and more. In just my lifetime I’ve seen a 180 degree shift in our culture, to the point that Christians are more than ignored, we’re actually hated in may sectors. You may remember during the last presidential election one of the major candidates said that Christians are unfit for public office because they’re so “hateful.”

The prevailing view of evangelical Christians in the eyes of the world today is that they are closed-minded, judgmental, self-righteous, hypocritical (condemning those who sin differently than they do), they love money and possessions just as much as non-Christians do, they gossip and slander one another, and they are two-faced.

Unfortunately, this is often true for many who profess to be “Bible-believing evangelicals” and it’s one of the primary reasons why the Christian faith has lost its “salt” in the world, so to speak. It’s also the reason why many Jesus-followers are abandoning the word “Christian” and “evangelical” to describe themselves. In what ways does your book address this perception of evangelical Christians?

Phil Cooke: That’s exactly where we began. Look at what the Bible calls the “Fruit of the Spirit” – love, joy, peace, gentleness, goodness, etc.  Those are the words that should come to mind when people hear the word “Christian.”  But which of those words do nonbelievers use to typically describe the Christian community today?  None.  We did some informal interviews and were far more likely to get words like hypocrite, phony, judgmental, harsh, political, etc..

That’s the disconnect.  The gap between how we view ourselves as a Christian community and how the world views us is the problem.

In a nutshell, what would you say are the key ingredients to “the way back” to Christian credibility and influence in the world?

Phil Cooke: We went to the biggest researchers in the country – Gallup, Pew, Barna, and Lifeway to discover exactly how Christians are doing when it comes to simple baseline behaviors: Prayer, Church Attendance, Reading the Bible, and Tithing.  The results were shocking.  Today, 40% of churchgoing Christians read the Bible “rarely or never.” The bar is now so low with church attendance, that you’re considered a “regular” if you show up just 19 times a year!  And prayer?  37% of Christians in the pew today don’t even think prayer is essential.

Give readers two or three takeaways from the book that they can implement in their lives right now.

Phil Cooke:  If we really want to make an impact in the world it’s time to get serious – and start with us. For my generation, Christian leaders often focused on the “Truth” of the Bible. That’s important, but for today’s generation, they’re more interested in “authenticity.” That simply means we need to live the life, not just preach about it. In many ways, we’ve become the fat guy in the gym who lectures everyone else about health.

When a person finishes your book, what do you want them to think and (more importantly) do?

Phil Cooke: Act.  Big or small, start thinking about ways you, your church, or your Christian friends can astonish this culture. Politics hasn’t worked. Boycotts haven’t worked. Anger strategies haven’t worked. The early Church had no power, influence, money, or clout, and yet they lived lives that were so astonishing to the Romans that it forced them to re-think who these Christians were and who was this  God they served.  What could we do today that would get the same reaction from our culture?

I know it’s early and the book just came out, but have you received any blow back so far on your arguments? If so, how and what is your response?

Phil Cooke: Surprisingly no.  My co-writer Jonathan Bock and I have been interviewed by those on the Right and the Left and received a positive response from both sides. Even Christian radio stations that are focused on politics are behind the book. I did an interview on CNN last week they said it was an important book about a critical issue today.

Phil Cooke: I’m all for individual Christians being involved in politics. I believe we have a responsibility to vote, join a political party, campaign, or run for office. However, when you drag the Church into it, that’s a huge problem. For instance, right now the country is pretty evenly divided between Left and Right. So once you align Christianity with a political party, you’ve immediately alienated half the country. How does that help the cause of Christ?

Here are some “quick fire” questions on the personal side, so those who have never heard of you can become better acquainted.

*When did you become a Christian and how did it happen?

Phil Cooke: I’m a preacher’s kid that grew up in Charlotte, North Carolina. Although I made an “official” trip to the altar to accept Christ as a young man, I’ve honestly never known what it’s like not to be a Christian.  I consider having Christian parents a rare gift, and I’m very grateful for that.

*Name a living person today who you regard to be “successful” – either Christian or not – and why?

Phil Cooke: Steve Green, President of Hobby Lobby and Founder of the Museum of the Bible in Washington, DC.  During the last 3 ½ years, our production company, Cooke Pictures, has had the honor of working with the Green family producing media to promote, raise funding, and market the museum to the world.  During that time, I’ve been so impressed with a man (along with wife Jackie) who has been enormously  successful in the business world – and could personally benefit from that – but instead puts so much of his wealth into projects like the Museum of the Bible. Honestly, the museum is breathtaking.  The  technology, the collection, and the building itself is remarkable. When it comes to acting on Christian principles, Steve has been a powerful example to me of integrity, vision, and leadership.

*If you could go back to when you were 30 years old, what would you change and why?

Phil Cooke: How much time do we have?  One big thing is that I would change the direction of my career. I’d stay in media and entertainment, but when I started in the industry I spent years following my “passion.”  It took many, many years for me to realize that my “passion” wasn’t really what I was wired to do.  That’s a critically important message to a generation that feels so strongly today about passion. Passion is great, but unless it’s aligned with the actual gifts, talents, and abilities you were born with, then your life will never reach its potential.

*Tell us about your morning routine.

Phil Cooke: I’m a morning person, no question. When my alarm goes off, birds sing, golden light rays stream into my window, and I hear heavenly choirs.  (My wife Kathleen – not so much). I wake up at 6am, spend an hour reading the Bible and praying.  At 7am I head to the gym for an hour.  At 8am, I go into the office where I have an hour jump on everyone else, so it’s quiet and the phones aren’t ringing.  I can accomplish more in that hour than in 3-4 hours at any other time of day.