“Then the two from Emmaus told their story of how Jesus had appeared to them as they were walking along the road, and how they had recognized him as he was breaking the bread.”

In Luke 24 the author tells an incredible story about the risen Christ. It goes something like this.

It’s a Sunday evening in AD 30. Earlier that morning the greatest historical event known to humankind occurred: Jesus of Nazareth rose from the dead.

As the sun begins to set, two disciples of Jesus walk from Jerusalem to the town of Emmaus. They are husband and wife. Cleopas and his wife Mary.

This couple has been following Jesus for a number of years. Perplexed and saddened, they had expected Jesus to save Israel from pagan domination. But instead, the Romans put the young prophet to death in the most violent way. Hanging from a cross with the blood of God and man dripping to the earth. A crown of thorns replaced what should have been a crown of imperial glory.

As Cleopas and Mary walk along the road to Emmaus, a mysterious stranger joins them. The stranger inquires about their conversation. They respond, “We followed a prophet who we thought was the Messiah. We hoped that he was the One who would redeem Israel. But he can’t be the Messiah because he was put to death on a cross.”

This mysterious stranger is Jesus, the risen Lord. But they do not recognize him.

Fully aware that they do not recognize who He is, Jesus strikes up a conversation with the couple, and in so doing He reframes the entire Old Testament story. He doesn’t deviate from the Scriptural narrative, but He tells the story anew and afresh. He adds Technicolor to the black-and-white way they had heard the story all their lives.

Jesus essentially says, “You’ve not understood the story correctly. You’ve been reading your Bible through the wrong end of the lens.” 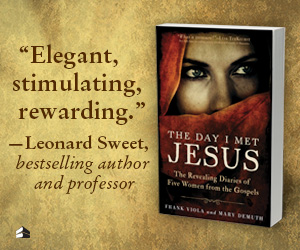 So beginning with Moses and all the Prophets, Jesus retells the narrative. As He unfolds the story, the “why” of Jesus’s death suddenly dawns on them and their hearts begin to burn.

Still captivated, Mary and Cleopas invite this intriguing stranger for dinner, and He accepts.

As He reclines at table, the Lord breaks bread, blesses it, and passes it on to them. Immediately, their eyes are opened. They recognize this stranger is no stranger at all. It is the risen Christ, Jesus of Nazareth, the One whom they have been following all along.

Luke writes, “Their eyes were opened and they knew.”

This sentence echoes Genesis 3, when another couple ate a different kind of food and “their eyes were opened and they knew.”

The message is clear: In His resurrection, the Lord Jesus Christ has reversed the fall of man and ushered in a new creation. What once seemed lost is now found. That which is broken beyond repair is restored to life. Dead dreams became resurrected hope—all because of Jesus’ raucous resurrection.

Fast forward to the present.

The world is full of people who walk to and fro, disappointed, disheartened, and perplexed.

Most Westerners have heard a diluted version of the gospel. In fact, they have heard the story incorrectly. The biblical story has been stripped, added to, and complicated. For countless Christians, the story of Scripture has become all too familiar. It lacks color, redemption, and life.

The need of the hour, then, is to tell the story differently . . .

To tell it differently to those who don’t know Jesus.

To tell it differently to the broken and downcast.

To tell it differently to the church.

To tell it differently to one another.

Out of His infinite mercy, we both have experienced Jesus on the road to Emmaus, and it has caused us to exclaim a holy “aha” as we have encountered His outrageous love

Jesus is a beautiful Revolutionary—not overturning governments, but conquering hearts and making them burn with joy.

The Austrian philosopher Ivan Illich said it best when he wrote, “Neither revolution nor reformation can ultimately change a society, rather you must tell a new powerful tale, one so persuasive that it sweeps away the old myths and becomes the preferred story . . . If you want to change a society, then you have to tell an alternative story.”

This is precisely why Mary DeMuth and I wrote this book.

** The above is an excerpt from the Introduction to The Day I Met Jesus: The Revealing Diaries of Five Women from the Gospels. Endnotes, which provide further information and sources, are not included in this post.

April 8, 2021 My Thoughts on “Hyper-Grace”
Recent Comments
0 | Leave a Comment
"As of this date - Nov. 10, 2020 - millions haven't "moved on" -- they ..."
Frank Viola Can Trump Defy Gravity & Regain ..."
"In response to the question about the possibilities of Trump ascending to a second term ..."
Christiane Smith Can Trump Defy Gravity & Regain ..."
"Jesus new covenant blood is the most potent unifying force on planet earth. The Cross ..."
John Campbell George Floyd and More Screwball Conspiracy ..."
"I'm surprised there have been no comments on this. I understand what Jim is saying. ..."
Kostya2 GENESIS 3 CHRISTIANITY and My Journey ..."
Browse Our Archives
get the latest from
The Deeper Journey
Sign up for our newsletter
POPULAR AT PATHEOS Evangelical
1

What Rejecting God Did to Higher...
Cranach
Related posts from The Deeper Journey

Evangelical
Theology Doesn't Have To Be a Bloodsport
The Deeper Journey