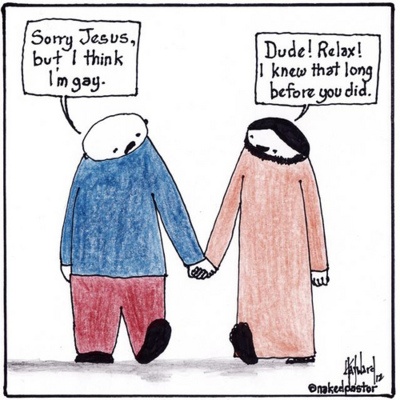 90% of gay men interviewed said they were born gay and have never been attracted to women. They have no experience of having chosen it any more than straight people chose to be straight, and they are told in no uncertain terms that it is sin.That’s my haircutter’s situation. I asked when he knew he was gay. He said, “Oh when I was five years old. I didn’t know what it was, but then the kids at the lunch table said, ‘Are you gay?’ I asked what that was and they told me. And I thought, ‘Well, yeah.’ But I knew from the way they talked about it, it was not a good thing, so I didn’t say it — but it was definitely me.” That fits with findings that suggest that people’s sexuality is set by about three years old.

Only the narrowest thinker would say, “Well, that’s just too bad.” The issue cannot be summarily dismissed like that.

Because to restrict the possibility of God’s blessing in a same-sex relationship is not only to say, like the soup nazi on Seinfeld: “No sex for you!” But it is also to say no companion, no life partner, no significant other, no one with whom to share life’s journeys and victories and defeats. That is a very steep price to extract, especially on the basis of 6 verses whose interpretation has been legitimately challenged.

This is the cognitive dissonance I described in Part 1 — the sinful choice of homosexuality vs. my experience of gay people. I understand that we must bear through trials as God conforms us to the image of Christ. That’s what brings growth. But for God to hold people accountable for something with no viable remedy did not fit my understanding of God. So I asked Him to show me.

Over the next several years, God challenged me to look into the verses. I read Love is an Orientation, which first showed me that the verses are in valid dispute. Scholars who have researched the verses, in the original context, suggest an intellectually honest interpretation that is not what we thought. This was news to me — news worth knowing. I didn’t want to believe we’d misinterpreted these verses just so I could be at peace, but because it was true. I wanted to believe it only if it was true.

Then I read Torn. It is the story of Justin Lee, raised Southern Baptist, who believed as he was taught that homosexuality is a sin. Then he discovered he was gay. No abuse in his past, a great relationship with his parents. And all the prayer in the world didn’t change his orientation. Torn tells not only Justin’s story, but his study of the verses involved. I prayed as I read it carefully.

By the end of the book, I had no doubt that the traditional interpretation was flawed. I am not asking you to believe me, agree with me, or take my word for it. I am asking you to look into it for yourself. I won’t make the case myself because I cannot do it as well as it’s already been done; instead I link you to resources. But bear this in mind: unless God has prepared a heart to hear the astoundingly good news of Jesus as Savior, the most persuasive presentation will not convince them. And unless you are open to new information about the interpretation of the 6-7 verses in question, the most persuasive presentation will not sway you.

There are rebuttals. And rebuttals to the rebuttals. (Pick any topic you like, search it on the internet, and you will find rebuttals.) In the end, you must find out what God would show you for yourself. Allow God to lead you through whatever process He wants. And remember that a process, by definition, takes time. Meanwhile I ask you to consider this.

One thing is sure: Jesus loves the LGBTQ community. Period. As much as He loves anyone. I pray for His revelation to each of us as we strive to understand His heart and truth.

CLICK HERE TO READ “To Christian Parents of Gay Children.”

May 7, 2013 Now that I've Come Out of the Closet
Recent Comments
2 Comments | Leave a Comment
Browse Our Archives
get the latest from
FreedHearts
Sign up for our newsletter
POPULAR AT PATHEOS Progressive Christian
1