What is Mark Driscoll’s Gospel? 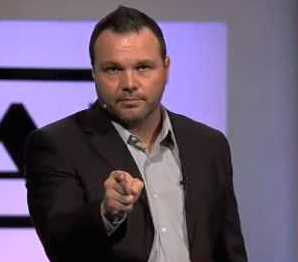 What is the “gospel” according to Mark Driscoll? Driscoll, Pastor of Mars Hill Church, is one of the loudest anti-gay voices out there – every word spoken “in the name of Jesus.”

I am pretty sure Jesus would not agree.

It appears that the Elders at Mars Hill Church have had enough. Yesterday, Driscoll stepped down because of his abusive message (and some other issues too).

Supporters are calling for forgiveness for Driscoll ‘so that he can get back to preaching the gospel.’

Seriously? But, what is the gospel according to Mark Driscoll?

Isn’t the gospel and message of Jesus about how we treat people, how we love them – instead of about their behavior and converting them into whatever ideal on which the church currently agrees?

Remember, the church has been wrong in the past — slavery, women voters, women in leadership, civil rights, biracial marriage. And the non-affirming church is wrong again about gays. The handful of scripture used to condemn gay relationships have been misinterpreted and incorrectly taught while ignoring many more scripture about love and grace and acceptance.

If we can “take grace too far” it’s not grace. If we place a single condition on love, it’s not unconditional. Period.

It’s become clear that Mark Driscoll’s ‘gospel’ is not about love, grace and freedom, it’s about guilt, shame and control.

I believe there is something much deeper going on here. I believe this kind of gospel message reflects Driscoll’s deeply held belief in how God treats him.

Anti-gay preachers like Driscoll judge, condemn, reject and abuse people – even fellow Christians – because this is their idea of how God treats us! They believe God is an angry, abusive god who condemns gays, shames people because of their differences, considers women as less-than — basically a bully.

Driscoll has stepped down, and it’s time for others like him to step down and seek God’s truth and heart — for it is very different from the message they preach. And that message is producing devastating, tragic results in LGBTQ and their families.

But the more they speak, the more the light of truth is revealing the darkness of their motive and message.

August 26, 2014 Crazy Is As Crazy Does
Recent Comments
1 Comment | Leave a Comment
Browse Our Archives
get the latest from
FreedHearts
Sign up for our newsletter
POPULAR AT PATHEOS Progressive Christian
1