Speaking the Truth in a Culture of Lies

Speaking the Truth in a Culture of Lies August 27, 2020 vancemorgan

Just short of a year ago, I spent a Saturday morning listening to a lecture by Joan Chittister. Her work and writing has been an inspiration for me over the past several years; I wrote the essay below about her lecture and more the day after I heard her in person. Her words hit me like an Old Testament prophet a year ago, and they are just as relevant today.

Yesterday I had the privilege of attending a talk given by one of my heroes. As I drove Jeanne to the airport on Friday morning to catch a plane to West Virginia, she expressed her disappointment at being prevented by work duties from attending the talk with me. “I feel like I’m going to hear the Virgin Mary or something,” I said. What I heard on Saturday was a compelling and inspiring prophetic call to action. 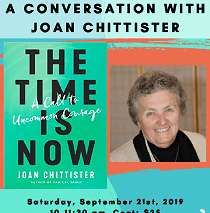 I first encountered Joan Chittister’s work a decade ago while on sabbatical; in short order, she became one of handful of authors and voices that helped lay the groundwork for significant changes that have redirected the spiritual track and energy of my inner life, my teaching and writing, and my relationships. Several hundred people were in attendance at the event yesterday; since the event was sponsored by “Sacred Threads,” a non-profit organization that says its mission is to “nourish, connect and inspire women by weaving spirituality into everyday life,” I was one of no more than a couple dozen men in a sea of women who clearly had the same “I’m getting to see a rock star!” energy that I did.

The topic of Sister Joan’s talk was “The Time is Now: A Call to Uncommon Courage,” which also (not surprisingly) is the title of her latest book (she’s written more than fifty). Now in her eighties, her hour-long talk was energetic, inspirational, and iconoclastic in all of the ways that those familiar with her work have come to expect. Her talk was so packed with content and insights that I don’t trust my scribbled notes to convey the heart of her message. Until her talk is available on the non-profit’s website and/or on YouTube so that I can listen to it again two or three times with Jeanne, a couple of snapshots will have to suffice for today.

Sister Joan’s entire talk reminded me of why her work was so influential for me a decade ago when I first encountered it and why it remains so today. Everything about Joan Chittister is a reminder that, for reasons not entirely clear, God has chosen human beings as the way that the divine gets into the world. It is our task to overcome our fears, our apathy, our laziness, and our self-interest in order to facilitate not only bringing God into the world, but finishing the work that God started at creation.

I have written in the past on this blog about my resonance with “tikkun olam,” or “repairing the world.” This is a concept in Judaism that a person commenting on one of my posts a couple of years ago described as “honoring Abraham’s covenant by serving as partners with God to do our part to make this world a better place for all humankind.” As Rabbi Abraham Heschel put it, “There is a partnership of God and men. God needs our help.”

This is not an exclusively Jewish sentiment; at the heart of Christianity lies the remarkable idea that the way God chooses to be in the world is through human beings. I was taught in my youth that the Incarnation—God becoming human—was a one-time historical event, but the truth of the matter is that the divine strategy of God engaging with the world in human form continues.

Several years ago, Joan Chittister was the writer who helped me see the miracle of incarnation in a new way, a new understanding that revitalized my Christian faith. The incarnation was not a “one-off” event. Rather, the divine strategy of God engaging with the world in human form continues—in you and in me. I was reminded over the past few days when reviewing some of the notes I have taken over the past decade on Chittister’s writing of how eloquently she expresses this foundational and revolutionary idea.

We must see what we are doing not only as the real purpose of our life but also the ultimate legacy of our life . . . God did not finish creation; God started it. Its ongoing development God leaves to us. What we do in life makes us the hands of God in living flesh and blood.

Elsewhere she expands on this idea more fully:

In her talk yesterday, Joan Chittister made frequent references to the great prophets from the Jewish scriptures, people who were almost always reluctant, afraid, and hesitant—but who ultimately were the voices of God’s truth in cultures infected with lies just as ours is. I particularly love these words from Isaiah, the words I read when my family and a few friends scattered my father’s ashes in a meadow at the base of the Grand Tetons in Wyoming almost two decades ago:

To comfort all who mourn, To console those who mourn in Zion,

Isaiah’s prophecy speaks of a time when healing, justice and liberation will be brought to the sick, oppressed and prisoners. Yesterday, Joan Chittister declared to a packed auditorium that the time Isaiah is speaking of is now, and we are the vehicles of that healing, justice and liberation. Our world is full of the poor, the bound, those who mourn, those who are in captivity both physically and mentally. We live in a world crying out for liberation, peace, and consolation at every level. So often we wonder where God is, where the divine solution to the never-ending problems and tragedies of our world is to be found.

The answer is that we are to be the oil of joy for those who mourn, to be the beauty in the midst of ashes, and to wrap the heavy of heart in the garment of praise. As the closing prayer in each Eucharistic celebration in the Episcopal liturgy asks, “send us now into the world in peace, and grant us strength and courage to love and serve you with gladness and singleness of heart.” In one of her many books, Sister Joan asks a provocative question, a question that the world asks continually of those of us who claim to be followers of Jesus.

Are you Jesus? people ask us silently every day. And the answer, if we live it with constancy, with regularity, with fidelity, is surely Yes. 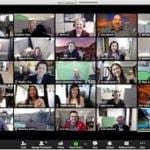 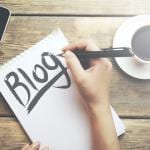