I Spank My Kids: Come and Get Me, Judge Longoria

When I lived in New York and Philadelphia, I was cautious about publicly disciplining my children, since I knew mothers in liberal northeastern cities differed greatly with my approach. For example, I once was chided by a mom in a library for getting on to my daughter for wandering off while I was trying to check out her books.

“You get back over here,” I said quietly, and my daughter began to throw a bit of a fit. In my urgency to avoid a public confrontation, I lapsed into the very unoriginal but still effective, “Keep it up, and I’ll really give you something to cry about!”

Another mom, ever so gently, pulled me aside. “You know, you really needn’t be so sharp with her,” she said. “The girl is obviously just trying to read books, and you will intellectually stunt her.”

The only thing I was trying to stunt was her defiance of basic instruction — a battle I fight with all three of my children. My insistence that my kids actually obey me put me at odds with friends who laughed when they saw me correct the kids at the playground. My friend Rene once said memorably, “I don’t use the word ‘obey’ with my kids, because it sounds so … Biblical.”

Incredulous, I asked her, “What do you do with the speed limit?”

I thought of these incidents over the weekend when a Drudge headline caught my eye. Apparently, a mother was convicted of a felony for what the prosecution called a “pretty simple, straightforward spanking case.” A belt wasn’t used, and no bruising occurred.

Where did this mother live? Berkeley? Manhattan? No, Rosalina Gonzales lives in Corpus Christi, Texas, where, by the way, it’s still legal to spank your children.

The Texas law states “Abuse does not include reasonable discipline by a parent/guardian/managing or possessory conservator if child is not exposed to substantial risk of harm. … Parent/stepparent/person standing in loco parentis to child is justified to use non-deadly force against a child under 18 when and to degree the actor reasonably believes necessary to discipline, or safeguard or promote child’s welfare.”

Nevertheless, Judge Longoria shamed the mother about her discipline before sentencing her to five years probation, a fine, and parenting classes.

This “legislating from the bench” makes me wonder if the worst problem Texas faces is an excess of parents trying to teach their kids how to behave.

As the mother of a toddler, I think it’s important for moms to come forward and quit being afraid of discipline that’s been tested by time. Moms tend to keep this a private matter, to avoid conflict or hard discussions with other parents. However, the Gonzales case should cause us to speak out in protest of an overreaching court.

That’s why I’m saying that I’ve spanked all three of my kids, and they aren’t raised yet. Spanking is far less emotionally manipulative than twenty nagging reprimands, it’s fast, and it’s certainly effective. And by the way, it’s legal.

So, Judge Longoria, come and get me.

This article first appeared on — and got lots of comments at — NRO.

July 2, 2011 As We Celebrate Our Liberty, An Iranian Pastor Faces Death
Recent Comments
0 | Leave a Comment
Browse Our Archives
Related posts from The French Revolution 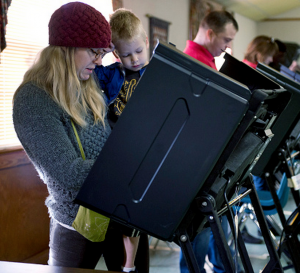