The Case For Mitt Romney

Why Mitt?  I’m asked the question almost every day.  Friends will pull me aside at church, casual acquaintances will stop me at Wal-Mart, and longtime colleagues will call for extended conversations.  They see me as a rare breed:  The “movement” conservative who is unabashedly, enthusiastically for Mitt Romney.

The answer begins with the time, this moment in American history.  Every few decades, turns in the business cycle, changes in culture, and policy mistakes conspire to make us question ourselves.  Is the American Dream still alive?  Will our children do better than we did?  Is America, after two hundred years of growth and hope, finally in decline?

The Great Recession may be over but what came afterwards — high structural unemployment and massive deficit spending — looks more like France than America.  We’re worried.  And with good reason.

Four years ago, a worried America turned to an untested, brand-new Senator from Illinois, a man who promised not just “hope and change” but that he could even heal our planet.  But we’re wiser now.  We’ve seen that behind the soaring rhetoric was the “Chicago way,” and an approach to fiscal policy that was unconventional only in its recklessness.  A pork-laden stimulus package more costly than the Iraq War?  Check.  A health care plan rammed through with procedural tricks and against the express wishes of a majority of Americans?  Check.  Unthinking class warfare against job creators and job providers?  Check.

We need a turnaround.  And there’s no better-qualified politician in America to execute a turnaround than Mitt Romney.  It’s what he’s done his entire career.

As a much younger man, Mitt Romney was named CEO of the struggling Bain & Company and brought it all the way back from the brink, leaving it financially healthy and prosperous. He helped found Bain Capital and turned it into an economic powerhouse, creating thousands of private-sector jobs and leaving it with $4 billion under management.

After his private sector success, he was called to save the Salt Lake City Olympics – the first post-9/11 games – from corruption and fiscal collapse. He turned an almost $400 million deficit into a $100 million profit – all while maintaining safety and security in tense times. Then, as governor of Massachusetts, he turned a $3 billion budget deficit into a $700 million surplus and left office with a 4.7 percent state unemployment rate.

Imagine for a moment  you’re interviewing a job applicant.  Your company is struggling, and you need somebody who can make you profitable again.  Several of the applicants have impressive-sounding ideas, but only one of the candidates has actually made it happen — has actually executed the turnaround — not once, not twice, but three times, in different places and contexts.  That person gets the job, and it’s not even close.

Yes, I know the presidency is about more than economics.  We also look to our presidents to defend life and to be a force for good in our culture.  And that’s what makes Mitt Romney’s record all the more impressive.  In Massachusetts — one of America’s most liberal states — he won a political leadership award from Massachusetts Citizens for Life after he vetoed expanded access to the so-called “morning after” abortion pill and vetoed a bill permitting embryonic stem cell research.  And in the battle for marriage, Maggie Gallagher, founder of the National Organization for Marriage, writes: “Mitt Romney didn’t just oppose court-ordered same-sex marriage with words, he fought hard, including behind the scenes.”

What does all this mean?  It means that Mitt Romney — an admitted convert on the abortion issue — has a better conservative record than did Ronald Reagan before he became president.

Yes, Mitt Romney is the architect of “Romneycare,” but if you actually look at the history, you’ll see that he did exactly what we’d like to see blue state conservative governors do.  Faced with veto-proof Democratic majorities committed to a punitive and destructive health-care reform, he expressly sought the counsel of leading conservative thinkers to fashion a much better alternative to the Democratic plan and then succeeded in passing it with overwhelming bipartisan support.  No, it’s not perfect (as Mitt freely admits), but Massachusetts citizens have a far better health plan than they’d have if Mitt weren’t governor.

As for Romneycare’s differences with Obamacare, I can summarize them in two sentences:  In Massachusetts, Mitt Romney balanced the budget then reached across the aisle to create a popular health reform program that was specifically designed for the unique needs of his state. Barack Obama, on the other hand, created a huge new entitlement program in an era of record deficits by ramming a possibly unconstitutional, one-size-fits all mandate through a reluctant congress and over the expressed objections of a majority of the American people.

Finally, I support Mitt Romney in part because of his faith. Faithful to his wife and an exemplary father to his sons, there has never been even a hint of scandal around Mitt.  He is a man of integrity because of his faith, not in spite of it, and if he makes it into the oval office I’ll know his values are grounded in something far more profound than political expediency, opinion polls, or purely personal philosophies.

If you wondered why I’ve spent countless hours over the past six years arguing that Mitt Romney should be our next president.  Now you know.  Republicans should not think they’re “settling” for Mitt; instead they’re selecting the right man at exactly the right time. 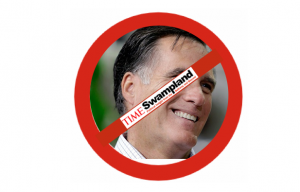 December 12, 2011
Time Takes a Swing at the Frenches
Next Post