Evangelicals for Mitt: The Book

Over the weekend, a group of evangelicals voted to endorse Rick Santorum over Newt Gingrich — without even seriously considering Mitt Romney.  These Christians apparently considered a even a thrice-divorced, ethically-challenged former Speaker of the House preferable to once-married, unquestionably ethical former governor.  The public justification for their vote was a quest to find a “true conservative” alternative to a man who is pro-life, pro-free market, and stands strong on national security.  Their “true conservative” alternative (Senator Santorum) is certainly an honorable man and a fine conservative leader, but it’s a stretch to claim he’s more conservative than Mitt.

By sheer coincidence (not really), Nancy and I are today releasing a Kindle book that is designed to directly and succinctly make the evangelical case for Mitt.  Called Why Evangelicals Should Support Mitt Romney (And Feel Good about It!), the book both tells a story and makes an argument. 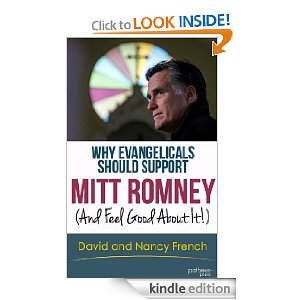 Beginning with the fall of 2005 when I first mentioned Mitt to Nancy, the book describes her initial resistance and deals with the key arguments about Mitt.  The chapters examine all the major issues, including:

-Evangelical objections to voting for Mormons;

-Mitt’s pro-life and pro-family record as Governor of Massachusetts;

-The truth about Romneycare and its differences from Obamacare.

-Mitt’s record of engineering economic turnarounds in the private and public sectors.

-Mitt’s commitment to national defense and his understanding of the jihadist threat.

Crucially, the book closes with personal stories from Nancy describing the Mitt and Ann we know — their warmth, their character, and their help to friends in need.

In the coming days and weeks, we’ll be advertising this book far and wide.  Our primaries are moving South, and millions of evangelicals will be taking a closer look Mitt.  We’re convinced they’ll like what they see.