Post-Partisan Evangelicals, Perception Versus Reality, and the Moral Primacy of the Abortion Debate

I was pleased to see that Jonathan Merritt responded to my “open letter” — especially since his new book inspired my post.  He was of course not the only one to respond, but I’m going to try to focus on Jonathan’s response.  Jonathan emphatically disagrees with my embrace of partisanship (of course he would; I hardly expected my letter to persuade him to repudiate the book he just wrote), and in so doing repeats many of his core points.  Here they are:

With these bullets (and to be fair to Jonathan, bullet points hardly contain the depth and nuance of a book, but he chose them so I’ll address them) I think Jonathan accurately describes a number of myths about the culture wars — myths successfully created and perpetuated by our secular opposition.

First, culture warriors do not overestimate the power of government to change hearts and minds.  We do recognize, however, that the law and government are well-equipped to protect human life and that is in fact one of the core, biblically-ordained roles of government.  Sadly, however, our government enforces with the power of its sword the “right” of a woman to pay a doctor to kill her child.  In an ideal world every child is a wanted child (and we should never cease to pray and work for such a world), but even unwanted children have a right to live and a right to the protection of governing authorities.  Every “culture warrior” I know understands that the ultimate answer is the Gospel.  Every culture warrior I know also understands that the government can and should do more to protect innocent life.

Jonathan’s second point is closely related to his first, but I find that when you look at the actual policy arguments put forward by culture warriors (and we’re both using the term broadly, I know), they’re quite limited in scope.  End legalized abortion.  Maintain current definitions of marriage.  Maintain traditional free speech standards.  Maintain the traditional place of religion in the public square.  Each one of those positions is a specific reaction to specific legal changes initiated by an aggressive, opposing cultural force.  You will note that (mainstream) culture warriors do not advocate any governmental position that mandates belief or violates the rights of conscience of any individual.  We are not asking too much of power — only that it not be used for improper ends.

Jonathan next gets directly at a point I make in my letter.  Just because that is the image of the church in the eyes of many does not mean it is the reality.  The reality is the church is by every objective measure focused on helping the poor more than fighting the culture war, but that fact is largely unknown because we don’t control our image in popular culture.  The other side would have us change not by different messaging but through an abandonment of the field.  Al Mohler wrote on Monday: “But when my phone rings with a call from a reporter these days, the question I am asked is never adultery or pornography.  It is about homosexuality.”  When it comes to homosexuality, we are addressing the obsessions of others.  (Don’t believe me?  Here’s a test: track your pastor’s next 25 sermons.  How many deal with homosexuality?)  When it comes to abortion, the blood of the innocents cries out for justice.

Fifth, when Jonathan talks about an “anemic, partisan church,” which church is he referring to?  Take a look at the chart below: 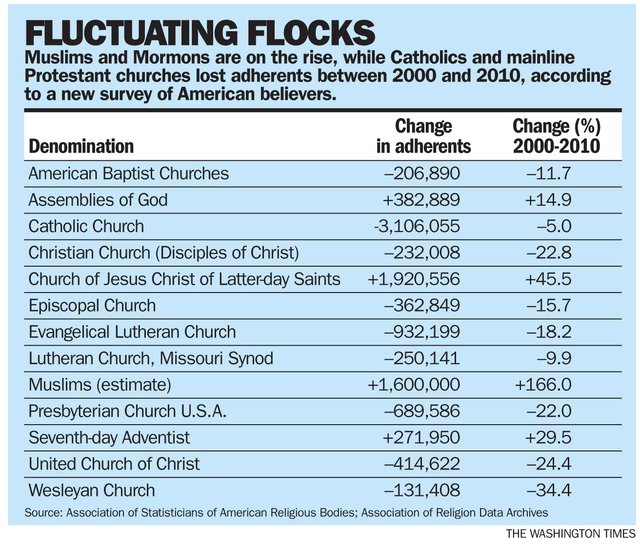 Putting aside the Muslim faith (where immigration is playing a very large part in growth), the denominations that are growing are hardly known for their timidity in the culture wars.  The denominations that are shrinking are those that have largely abandoned the field on, say, abortion and gay marriage (they are partisan in other areas but not known as “culture warriors”).  Even more striking, these denominations have shrunk in size even as the population has grown.  So, yes, believers are leaving certain churches in droves — just not the “culture war” churches.

The greatest threat to the church is not fighting abortion or voting in droves for Republicans.  The greatest threat to the church is the path taken by the Mainline — abandoning orthodoxy.  Of course we can do a better job in presenting our message to the culture.  We’re fallen and flawed people, after all.  But let’s be clear, to be accepted as “post-partisan” we have to give up any effective advocacy against legal abortion.  The instant you are effective is the instant you are no longer post-partisan.

You’ll note (as my critics certainly have) that I place abortion at the center of my argument.  My argument against post-partisanship is not free-standing.  In other words, it’s driven by the context of our times, and much like during the slavery debate prior to the Civil War, our relevant political parties have chosen sides on the issue of life.  They have chosen sides in a way that is different in kind from their marginal differences on war and peace (Obama continued every single existing Bush war policy and tactic), entitlements (where the primary argument is over rate of growth, not their existence), and tax rates (where again the difference is over small changes in percentages, not existence).  Even in the arena of gay marriage there is more in-party diversity than exists on the abortion question.

The intentional, legally-protected taking of human life on an industrial scale is a moral monstrosity condemned by every single strand of Christian orthodoxy.  Every one.  There is no coherent comparison between abortion and our wars in Iraq and Afghanistan (Are unborn children trying to kill their mothers?), where our nation faced — and still faces throughout the Middle East — governments and individuals bent on killing as many Americans as they can.  While Christians can certainly debate the wisdom of any given conflict or military tactic, to compare our response to 9/11 and the 33 year Islamic Jihad against America (beginning with the hostage crisis in 1979) to the legally-protected intentional killing of millions of innocent children is, quite simply, depraved.

Jonathan claims that my tactics and the tactics of those who fight with us have “failed us so miserably.”  Yet the last five years have seen a record number of successful legislative efforts to regulate and restrict abortion and now the number of Americans who call themselves “pro-choice” is at a record low.  And that progress has occurred in the face of decades of relentless demonization of pro-life advocates, not just at the hands of the mainstream media and pop culture, but also — sadly — at the hands of Christians who are ashamed of the movement’s steadfast efforts.

When the “culture warriors” of 1860 looked to cast their vote, they had but one real option.  But now, with the benefit of hindsight, Christians are rightly proud of the stand that they took, the witness they presented to our nation, and the votes they cast.  Sure, not all the Republicans of 1860 had truly biblical views of race, slavery, and individual liberty, and the party was deeply flawed on a number of levels, but their view of human life was fundamentally different in kind than the competing views of the Southern Democratic or Constitutional Union parties.  Simply put, until both political parties embrace not just the repeal of Roe v. Wade but the legal protection of innocent life — from conception until natural death — I will be a partisan of the only party that has made the correct choice.

Catching up on the debate:

My original post: “An Open Letter to Young, Post-Partisan Evangelicals”

Jonathan’s book:  A Faith of Our Own: Following Jesus Beyond the Culture Wars 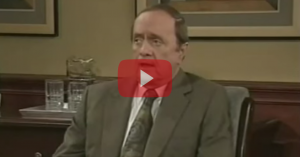 May 24, 2012 Ignatius the Ultimate Youth Pastor
Recent Comments
0 | Leave a Comment
Browse Our Archives
Related posts from The French Revolution