“I think people are scared — scared of change, and what has been in the closet is finally coming out, and too many people are not willing to accept it,” White said.

He argued they have to accept it, adding that it’s a civil rights issue.

“It’s time for our society to do as Rodney King did and say, ‘Can’t we all get along?’ That should be the 11th commandment as far as I’m concerned,” he said.

-Rev. Oliver White of Grace Community United Church of Christ explaining why his congregation lost most of its members after he publicly supported gay marriage.

May 31, 2012 An Inadvertently Revealing (and Epic) Political Rant
Recent Comments
0 | Leave a Comment
Browse Our Archives
Follow Us! 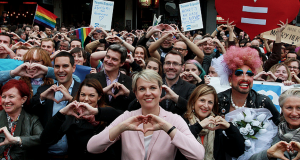 Politics Red
The Biggest Threat to Christianity Now in America:...
The French Revolution