The Biblical and Natural Right of Self Defense

In the aftermath of my rather defiant posts both here in Patheos and over on NRO, several readers have asked me to take a deeper look at the biblical justification for the right of self defense (and defense of others) outside the context of law enforcement and military operations.  It is quite clear that God has not merely sanctioned the right of self defense but has explicitly approved even the use of deadly force to protect human life.

Let’s go back — way back — to Noah.  Among God’s first words to Noah after the Flood subsided was this declaration of the importance of human life and the price paid for spilling human blood:  “Whoever sheds the blood of man, by man shall his blood be shed, for God made man in his own image.” (Genesis 9:6)  This statement is not made to a nation-state or to a police force but instead to a small band of people who are rebuilding human society from the ground up.  The principle is clear: Human life is precious and God mandates the ultimate penalty for taking life.

While obviously not specifically addressing self-defense, by establishing that fundamental principle the biblical commands and examples that follow demonstrate how God expects us to protect life in the real world.

In Mosaic law, God obviously continued his mandate of the death penalty for murder (as well as for blasphemy and other crimes) — but not for all killing.  He specifically carved out an exception for the defense of one’s home:  “If a thief is found breaking in and is struck so that he dies, there shall be no bloodguilt for him . . .” (Exodus 22:2).  There was bloodguilt if the thief was killed during the day, however.  Note the grace that God gives the citizen in the midst of the fear and ambiguity of a nighttime invasion — even a “thief” (not a rapist, not a murderer) can be killed at night, but in the clarity of day, the “thief” (again, not a rapist, not a murderer) should not be killed.

Going forward, the morality of the right of self-defense is presumed.  Nehemiah, when he was rebuilding the Jerusalem in the face of hatred (not in wartime, but when tribal neighbors were seeking to carry out vigilante attacks on Jews) instructed his people:  “Do not be afraid of them.  Remember the Lord, who is great and awesome, and fight for your brothers, your sons, your daughters, your wives, and your homes.”  (Nehemiah 4:14).

It’s often-forgotten that the climax of the Book of Esther involves the Jews gathering together in an act of self-defense, where a despotic king was persuaded to allow them to fight against their attackers:  “. . . the king allowed the Jews who were in every city to gather and defend their lives, to destroy, to kill, and to annihilate any armed force of any people or province that might attack them, children and women included, and to plunder their goods.”  (Esther 8:11).  The Jews then “struck all their enemies with the sword, killing and destroying them, and did as they pleased to those that hated them.”  (Esther 9:5).  Before Esther’s intervention, a despotic king would have denied the Jews their right of self-defense.  After Esther’s intervention, the Jews didn’t merely look to law enforcement for salvation but took matters into their own hands.

While the New Testament certainly removes from the individual Christian any justification for vengeance (leaving vengeance to God’s agent, the state) — lex talionis was a rule of proportionate justice, not self-defense.  In fact, Jesus’s disciples carried swords and even said the unarmed should arm themselves.  The sword’s use was only specifically forbidden when Peter used violence to block Christ’s specific purpose to lay down his life.

The idea that one is required to surrender their lives — or the lives of their family, neighbors, or even strangers — in the face of armed attack is completely alien to scripture.  There are many examples of martyrs surrendering their lives in the face of evil, but such an act is highly contextual and in response to the individual call of God on a man (or woman’s) life.  I know of no precedent for the idea that we are called to surrender the lives of others (such as our spouse, children, or neighbors) in response to deadly attack.

In fact, these understandings are so ingrained in Western moral tradition that John Locke, in his Second Treatise of Civil Government, described the right of self defense as a “fundamental law of nature”:

Sec. 16. THE state of war is a state of enmity and destruction: and therefore declaring by word or action, not a passionate and hasty, but a sedate settled design upon another man’s life, puts him in a state of war with him against whom he has declared such an intention, and so has exposed his life to the other’s power to be taken away by him, or any one that joins with him in his defence, and espouses his quarrel; it being reasonable and just, I should have a right to destroy that which threatens me with destruction: for, by the fundamental law of nature, man being to be preserved as much as possible, when all cannot be preserved, the safety of the innocent is to be preferred: and one may destroy a man who makes war upon him, or has discovered an enmity to his being, for the same reason that he may kill a wolf or a lion; because such men are not under the ties of the commonlaw of reason, have no other rule, but that of force and violence, and so may be treated as beasts of prey, those dangerous and noxious creatures, that will be sure to destroy him whenever he falls into their power. . . . (emphasis added)

Moreover, these fundamental laws of nature were inseparable from the will of God:

The Supreme Court has also recognized that the right of self defense was a “natural right” of man that predated the very founding of our nation:

By the time of the founding, the right to have arms had become fundamental for English subjects. See Malcolm 122–134. Blackstone, whose works, we have said, “constituted the preeminent authority on English law for the founding generation,” Alden v. Maine, 527 U. S. 706, 715 (1999) , cited the arms provision of the Bill of Rights as one of the fundamental rights of Englishmen. See 1 Blackstone 136, 139–140 (1765). His description of it cannot possibly be thought to tie it to militia or military service. It was, he said, “the natural right of resistance and self-preservation,” id., at 139, and “the right of having and using arms for self-preservation and defence,” id., at 140; see also 3 id., at 2–4 (1768). Other contemporary authorities concurred. See G. Sharp, Tracts, Concerning the Ancient and Only True Legal Means of National Defence, by a Free Militia 17–18, 27 (3d ed. 1782); 2 J. de Lolme, The Rise and Progress of the English Constitution 886–887 (1784) (A. Stephens ed. 1838); W. Blizard, Desultory Reflections on Police 59–60 (1785). Thus, the right secured in 1689 as a result of the Stuarts’ abuses was by the time of the founding understood to be an individual right protecting against both public and private violence.

What does all this mean?  Essentially that gun control represents not merely a limitation on a constitutional right but a limitation on a God-given right of man that has existed throughout the history of civil society.  All rights — of course — are subject to some limits (free speech is not unlimited, for example), and there is much room for debate on the extent of those limits, but state action against the right of self-defense is by default a violation of the natural rights of man, and the state’s political judgment about the limitations of that right should be viewed with extreme skepticism and must overcome a heavy burden of justification.

July 27, 2012 Dancing with the Stars All Star Edition
Recent Comments
0 | Leave a Comment
Browse Our Archives
Related posts from The French Revolution

Politics Red
Check Out How a Texas High School Text...
The French Revolution 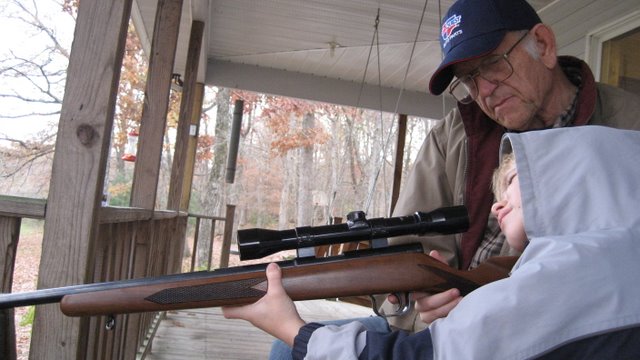 Politics Red
Three Reasons Why We 'Cling'
The French Revolution