How Do You Raise Pro-Life Children? Adopt!

How Do You Raise Pro-Life Children? Adopt! September 10, 2012 David French 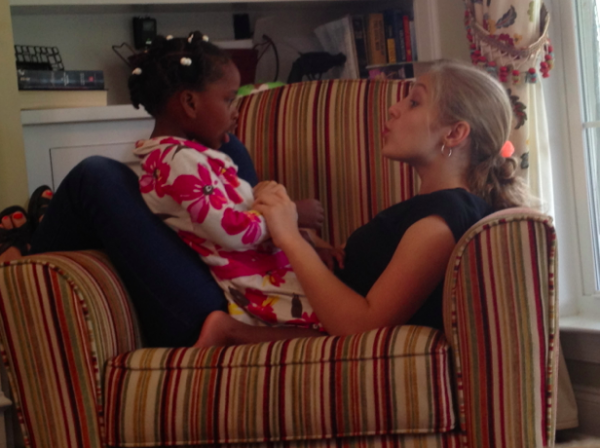 I rarely lose marital arguments, but this one I lost — decisively.

It was early spring 2010, I was only about 18 months removed from my Iraq Deployment, and I was adamant: Our older kids were not flying to Ethiopia to pick up our youngest daughter.  In fact, I just might go alone.  My reasoning was irrational.  With Iraq still fresh in my mind, I viewed the developing world as a “danger zone” that was no place for young kids.  Even if there was no danger of violence, why risk illness?   Why risk the travel on the back roads in the deep south of the country?  Why risk anything more than we must?

My wife was incredulous.  You’re saying this now?  After we waited, fearful, at home as your unit took casualty after casualty?  As you rolled again and again “outside the wire” and were sometimes out of communication for days and weeks at a time?

Needless to say, Nancy won that argument, and my oldest kids were with us at the moment when an orphanage nanny handed us our beautiful, precious Naomi, the little Ethiopian girl that God had set aside to be a French from Columbia, Tennessee.

Last week, LifeNews ran an article by Kristi Burton Brown outlining eleven suggestions for instilling pro-life values in our children.  Her suggestions are all worthy, but I counter with just one:  If you can, adopt.  In other words, don’t just advocate for life, live your love for life as part of your core identity.

To be clear, we didn’t adopt for the purpose of creating little pro-life clones, we adopted because we were called to — because through Christ we are adopted as sons and daughters of God, and we are called to a life in imitation of our savior — because life isn’t just an “issue,” but a way of living, of thinking, of doing. But mostly we adopted because we had a daughter overseas who needed her family to come get her and bring her home.

During the adoption process, we explained these concepts to our older kids.  We explained Christ’s model, His definition of “pure” religion, and what it means to feel called.  But talking is no substitute for walking, and it was vitally important that they walk with us.  How can one understand the tragic loss of abortion without understanding the incredible blessing of birth?  How can a movement effectively advocate for repairing broken homes and raising abandoned children without building families and adopting orphans?  Camille and Austin love Naomi intensely and completely.  Now they know, in their heart of hearts, that every abortion is a lost son or a lost daughter. 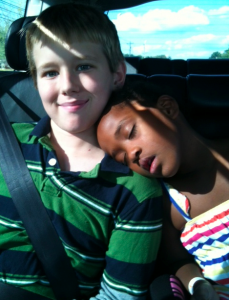 Parents who seek to raise God-loving, Life-honoring, self-sacrificing children in a godless, murderous, indulgent culture must pay more than mere lip service to their core values.  We must do more than volunteer, preach, or blog.  We must do more than attend church, learn catechisms, and do short-term missions.  We must commit ourselves, wholly and completely, to walking our talk.  Do you want to teach your children to love their country?  Wear the uniform.  Do you want them to love and serve the poor?  Then engage and lift up the poor directly and personally.  Do you want them to value life?  Show them how much life matters.

I have told this story often, but I never tire of telling it: On November 22, 2007, I flew into Forward Operating Base Caldwell in Diyala Province, Iraq.  As I looked over the door gunner’s shoulder and saw fires in the distance, I became desperately afraid.  “God,” I prayed, “please give me assurance that I’ll live through this deployment and see my family again.”  Yet no assurance came.  I prayed the prayer often — especially as our casualties mounted and friends died.  But assurances never came.  Was God hearing my prayers?  Why must I live in such fear?

Almost two full years later, I was safely home in Tennessee when we received our adoption referral papers.  As we tore open the envelope and got our first glimpse at Naomi, I scanned down the page to see her vital statistics.  She was horribly malnourished but otherwise healthy; she was safely in the hands of a good orphanage that would finally start to feed her well, and she was almost two years old.  Her birthday?  November 22, 2007.

When I was desperately afraid for my life and living literally minute by minute, God was — unknown to any of us — preparing the next phase of our family’s future in a tiny village in Ethiopia.  Naomi was meant to be our daughter, and we were meant to be her parents.  We were not God’s second choice for Naomi.

September 10, 2012
Why Evangelical Enthusiasm for Romney Continues to Grow
Next Post

September 11, 2012 9/11: The Case for Controlled and Sustained Rage
Recent Comments
0 | Leave a Comment
Browse Our Archives
get the latest from
Politics Red
Sign up for our newsletter
POPULAR AT PATHEOS Politics Red
1