What kind of Mother would use her 6-year-old daughter to advocate for abortion? Hillary Clinton

Oh, the irony — using your blessing of a child to promote the killing of unborn children. Do the Clintons truly have no moral limitations?

David French, writing for the National Review, gives more details on the story:

I find this story exceedingly hard to believe, but if it’s true, what does it say about Hillary Clinton?

Chelsea Clinton claims she left a Baptist church as a child because they started talking about abortion in Sunday when she was just six years old. Chelsea made the comment at a recent fundraiser for her mother Hillary Clinton in an attempt to address evangelicals who question her mother’s faith in God and secular voters who say she’s too religious, according to The New York Post.

Here’s Chelsea, in her own words:

’I find it quite insulting sometimes when people say to my mom, my dad or me . . . that they question our faith,’ said Chelsea. ’I was raised in a Methodist church and I left the Baptist church before my dad did, because I didn’t know why they were talking to me about abortion when I was 6 in Sunday school — that’s a true story,’ the presidential hopeful’s daughter added.

Let’s make one thing clear — a six-year-old makes political statements only because she’s either reflecting her parents loudly-proclaimed views or because her parents are instructing her to act (most likely the latter). Parents who let their (or make) their very young children leave church to support “choice” are abortion zealots — pure and simple.

The bible instructs parents to “raise a child up in the way he should go.” Being church-goers themselves, they would know this phrase by heart — but to the Clinton this obviously meant to brain wash their young, impressionable daughter and use her as a political game piece.

As David points out at the end of this piece, the story is most likely a fabrication of the Clintons to convince pro-choice America of their dedication to the cause.

Either way — this is nothing to be proud of.

February 18, 2016
Donald Trump responds to the Pope's slam that anyone who supports "building a wall" isn't Christian
Next Post 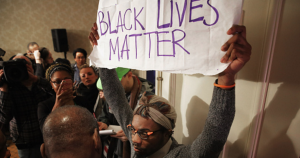