Candy Crowley on Sept. 28th: Why Did It Take Obama So Long to Call Attacks Terrorism?

Candy Crowley on Sept. 28th: Why Did It Take Obama So Long to Call Attacks Terrorism? October 16, 2012 Nancy French 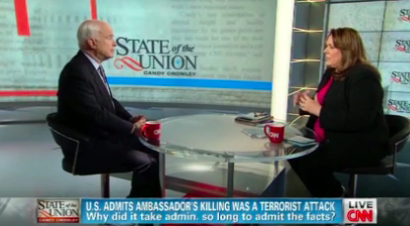 Oops!  Turns out, Candy Crowley actually used to believe that it took the President a long time to admit the actions in Libya were terrorist acts.  In an interview with John McCain, she asks:

Friday [Sept 28th], we got the administration’s sort of definitive statement that this now looks as though it was a pre-planned attack by a terrorist group, some of whom were at least sympathetic to Al-Qaeda. Why do you think, and are you bothered, that it has taken them so long to get to this conclusion?

October 17, 2012 Star Wars Flash Mob
Recent Comments
0 | Leave a Comment
Browse Our Archives
get the latest from
Politics Red
Sign up for our newsletter
Related posts from The French Revolution