Christians shouldn’t be all that excited about when it comes to the selection of Indiana Gov. Mike Pence as Donald Trump’s vice presidential candidate.

Though most used to consider Pence a hard-line conservative, it all changed when he threw religious liberty under the bus in his state of Indiana.  In his piece for the National Review, David French writes, “A candidate whose concern for religious liberty was already suspect just selected a symbol of cultural defeat as his running mate.”

He then points to The Weekly Standard‘s Mark Hemingway who reminds that Pence is responsible for throwing religious liberty under the bus in his state the second media pressure got to be too much:

Recall that last year, Indiana passed a state religious freedom restoration act (RFRA), which was the state version of existing federal legislation that passed Congress and was signed into President Bill Clinton with overwhelming bipartisan support . . . Though the Indiana law is not in conflict with other LGBT protections, it was decried as an act of bigotry. Journalists started fishing for villains, settling on the religious owners of an Indiana pizza parlor who said they would not (hypothetically) want to cater a gay wedding. Companies such as Apple and Ebay, which have no problem doing business in bastions of enlightened attitudes on gays as Saudi Arabia and Indonesia, threatened to boycott Indiana. (Curiously, they have not also threatened to boycott the existing 21 states with RFRAs.)

Once it became clear that Pence was going to have to make a stand on religious freedom, he folded. Indiana’s religious freedom law was gutted at Pence’s direction within a week of it being passed.

That’s not what you could call taking a firm stand for religious liberty. If a little media pressure was enough to cause Pence’s convictions to crumble, imagine how he might act under daily scrutiny as vice president.

I’ll give David the last word:

Pence was not only unable to withstand one single news cycle of pressure, he also essentially provided a proof-of-concept for much of the corporate bullying that’s happened since. He energized boardroom activists, showing them that a few press releases and a day or two of Twitter trends could cause even alleged “true conservatives” to back down. Pence has done good things in his career, but this capitulation has an enduring and bitter cultural and political legacy. It was an act of surprising and consequential weakness. 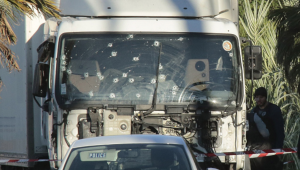 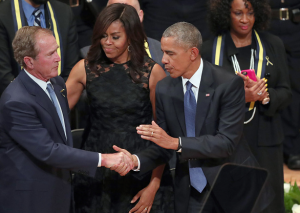 July 18, 2016 George W. Bush versus President Obama at Dallas memorial speech
Browse Our Archives
get the latest from
Politics Red
Sign up for our newsletter
POPULAR AT PATHEOS Politics Red
1