NBC hostAl Trautwig refused to describe Ron and Nellie Biles as the parents of Olympic gymnast megastar Simone Biles, even though they adopted her and her sister after from foster care in 2000.

According to the Hollywood Reporter:

Simone Biles went to live with her grandparents in Texas while her birth mother Shanon Biles struggled with drugs and alcohol in Ohio, and she was adopted when Shanon’s parental rights were terminated. Simone remains in contact with Shanon but is quick to correct anyone who calls Shanon her mother. Shanon Biles is her biological mother, she says. Nellie Biles is mom.

“Mother” and “father” also were the phrases used by NBC in a profile of Biles that aired Sunday night.

Shortly thereafter, Trautwig said on the air that Simone “was raised by her grandfather and his wife and she calls them mom and dad.”

A woman on Twitter then urged Trautwig to stop calling Ron and Nellie her grandfather and his wife. “They are her parents,” she wrote. But Trautwig replied in his since-deleted tweet: “They may be mom and dad but they are NOT her parents.”

Of course, what Trautwig fails to understand is that adoption changes everything.

Russell Moore described this adoption-as-lesser mentality as one of the greatest challenges of adoption:

The greatest challenge is confronting the idea that there’s somehow a difference between adopted children and biological children in terms of affection, in terms of the structure of the family, which is not true. There’s no such thing as adopted children. There are only children who were adopted. In a biblical understanding, “adopted” is a past-tense verb, not an adjective. So once someone has been adopted into the family, that person is part of the family with everything that that means.

Chuck Johnson, president and CEO of the National Council for Adoption spoke out against the NBC tweet.”If they are parenting her — that’s what a parent does — don’t diminish the role by calling them something other than her parents.”

NBC forced  Trautwig to delete the tweet.  The following day, he tweeted this:

“To set the record straight, Ron and Nellie are Simone’s parents.”

August 8, 2016
Kerri Walsh Jennings' comment about babies stark contrast to player who had 2 abortions to preserve her career
Next Post 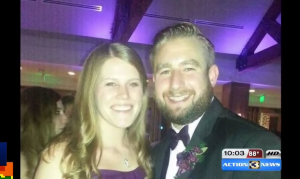