Testifying before the House Intelligence Committee, Comey said the investigation is also exploring whether there was any coordination between the campaign and the Kremlin.

The acknowledgment was an unusual move, given that the FBI’s practice is not to confirm the existence of ongoing investigations. “But in unusual circumstances, where it is in the public interest,” Comey said, “it may be appropriate to do so.”

The head of the committee is  Rep. Devin Nunes, a Republican from California, who said:

“The fact that Russia hacked U.S. election-related databases comes as no shock to this committee, we have been closely monitoring Russia’s aggressions for years. However, while the indications of Russian measures targeting the U.S. presidential election are deeply troubling, one benefit is already clear – it has focused wide attention on the pressing threats posed by the Russian autocrat. In recent years, Committee members have issue repeated and forceful please for stronger action against Russian belligerence. But the Obama administration was committee to the notion, against all evidence, that we could ‘reset’ relations with Putin, and it routinely ignored our warnings.”

According to the Post, Nunes said he wanted these three questions answered:

In his opening statement, Schiff said, “we will never know whether the Russian intervention was determinative in such a close election. Indeed it is unknowlable in a campaign in which so many small changes could have dictated a different result. More importantly, and for the purposes of our investigation, it simply does not matter. What does matter is this: the Russians successfully meddled in our democracy, and our intelligence agencies have concluded that they will do so again.”

David French says this is good news for two reasons:

This is good news on two counts (1) It ends speculation over existence of investigation (2) It confirms the FBI is doing a job it should do. https://t.co/jxtfmtMbhv

This is good news on two counts

(1) It ends speculation over existence of investigation

(2) It confirms the FBI is doing a job it should do.

Of course, it now means that both of the 2016 Presidential candidates have been at some point under FBI investigation. 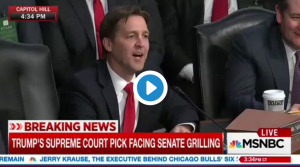 March 22, 2017 VIDEO: Ben Sasse causes Gorsuch to break into laughter by reading hilarious text from his wife
Browse Our Archives
Follow Us!