This is the seventh installment of a ten part series by Dr. Scott Sunquist on what trends in missiology we can expect in the coming years.

In October of 2015, at the 50th Anniversary Celebration of the School of Intercultural Studies, we heard again and again how the work, concept, and reality of the Holy Spirit came up again and again in the first ½ century of this particular school. Some of the innovations or major topics that came out of the “School of World Mission” included the famous article by Paul Hiebert on “The Flaw of the Excluded Middle,”[1] “power evangelism” of John Wimber, and “signs and wonders” “Third Wave” as a missional theology of Chuck Kraft and Peter Wagner.[2] All of these topics were discussions related to the work of the Holy Spirit. It was not just a Fuller Theological Seminary topic, but this one seminary was reflecting what was going on in the world, specifically in global mission. The explosion of Pneumatic forms of Christianity began with the opening of the 20th century and there is no sign that this will change. Future Christian mission will be guided and empowered more by unmediated means (the direct influence of the Holy Spirit), and less through what is mediated by human efforts (Enlightenment reasoning and programs).

This does not mean that we are driving a wedge between human reason and divine intervention it just means that we should reaffirm the direct work of the Holy Spirit in mission and be more attentive to these themes. In Africa this has not meant that missionary work was wasted in the past, but that God’s intervention has breathed new life and even correction into that work. Ogbu Kalu has a nuanced view of missionary work and the miraculous work of the Holy Spirit in Africa. He has expressed it in the following way:

One may need a foreign missionary to hear the gospel for the first time, but not necessarily for experiencing the baptism of the Spirit….The Pentecostal experience broke out without missionaries or any foreigners and often to the consternation of missionaries who deployed the colonial government’s clout to contain the flares. In many cases, the indigenes invited the foreigners…African Pentecostalism did not originate from Azusa Street and is not an extension of the American electronic church. We should analyze the relationship with external change agents carefully to show that the movement emanated from the missionary churches and evangelical spirituality.

The missionary has always been part of the development of Christianity in Africa, but two other agents are central: the appropriation of that message by indigenes, and the surprising outpouring of the Holy Spirit. Pentecostal experiences make perfect sense in the flow of religious life and expressions in Africa; less so in the Enlightenment West. Thus, a recovery of Pneumatic Christianity has occurred and continues to develop not only in Africa, but in most of Asia and Latin America. Christian mission must shed many of the Enlightenment assumptions that prevent the fullness of the development of Christianity in each context. 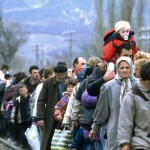