Riots are the Voice of the Unheard: Thoughts on Baltimore

I went to college in Maryland, and while I now live in the mid-west, I have many friends and connections in the DC metro area, including Baltimore. My perception of Baltimore may be somewhat different from others, since I’ve only been there a handful of times and when I was there, did one of two things: go to the inner harbor and do tourist stuff, and visit death row. I used to write to a man on death row in Baltimore’s “super max” penitentiary, and made a visit with him once. I also stood in prayer vigil with others as Maryland executed Wesley Baker in 2005. So for those of you who live in and love Baltimore, you’ll forgive me if my perception of the city is a bit warped by only having seen the best and worst of what it has to offer, and not much in between.

That said, I can’t stop thinking about what has been happening there. And what, for so long, hasn’t been happening there. Namely, anyone in power giving a shit about the systemic destruction of the community where these uprisings are now occurring. Namely the systematic isolation, redlining and other tools of social engineering that have created communities where dysfunction, trauma, and poverty run generations deep and those of us who have not known social chaos born of generations of unhealed trauma can’t begin to understand. But no one is talking about this, unless its to blame the people themselves for not being better, for not magically knowing how to be more like “us”.

Where was the news media when West Baltimore was ravaged by the scourge of sub-prime mortgages which subsequently left thousands homeless and with trashed credit to boot? Where were the arrests for destruction of property when predatory lenders offered upside down mortgages to people they knew couldn’t pay?

Something else that has gotten to me lately, is the way we talk about people on the margins. I’ve just begun noticing this, but now I can’t stop seeing it. People on the margins are always discussed by those in power as problems to be solved, not persons to be loved.

Women have experienced this when we are told that our bodies are a problem to be solved, and if we just cover them “right” and don’t go to certain neighborhoods, and police ourselves, we won’t get raped. Because our bodies are the problem. Maybe the same view is at work in communities of color, when the discussion is always framed around how black communities are one big problem that needs solving. Too violent, too poor, too uneducated, too sad. But yet, a community is nothing more than the people who make it up. And if I’ve learned nothing else from my faith, it’s this: persons are to be loved, not used, and not written off.

There’s been so much emphasis on the challenges that urban communities of color face, and not enough emphasis on the people who make up these communities. People with goals, dreams, hopes, fears, traumas and problems, yes, but also courage and hope. What if what people of color need from us is less of us telling them how awful their communities are, and more of us listening to their stories and offering help that they themselves think they need? One principle of Catholic Social Teaching is subsidiarity, which offers that decisions ought to be made by the smallest possible unit to do so. Don’t communities of color know what they need? Perhaps we should do more asking and less telling? Martin Luther King Jr once described a riot as “the language of the unheard”. After what we’ve seen time and time again in the wake of the killing of unarmed citizens by their police, I’d say we are hearing from these communities in ways we do not like, because we’ve refused to listen or understand in the past.

The larger passage that quote is taken from is particularly telling, in that it was written more than 40 years ago and could have been penned last week.

“Now I wanted to say something about the fact that we have lived over these last two or three summers with agony and we have seen our cities going up in flames. And I would be the first to say that I am still committed to militant, powerful, massive, non-violence as the most potent weapon in grappling with the problem from a direct action point of view. I’m absolutely convinced that a riot merely intensifies the fears of the white community while relieving the guilt. And I feel that we must always work with an effective, powerful weapon and method that brings about tangible results. BUT it is not enough for me to stand before you tonight and condemn riots. It would be morally irresponsible for me to do that without, at the same time, condemning the contingent, intolerable conditions that exist in our society. These conditions are the things that cause individuals to feel that they have no other alternative than to engage in violent rebellions to get attention. And I must say tonight that a riot is the language of the unheard. And what is it America has failed to hear? It has failed to hear that the plight of the negro poor has worsened over the last twelve or fifteen years. It has failed to hear that the promises of freedom and justice have not been met. And it has failed to hear that large segments of white society are more concerned about tranquility and the status quo than about justice and humanity.”  – MLK Jr.

I myself have been guilty of this view, of seeing people are problems to be solved ahead of persons to be loved. From this sin, dear Lord, deliver me, and all your people.

Some other takes on what’s happening in Baltimore can be found at These Walls, And Another Thing, Hon, and Catholic Review.

May 7, 2015 Mother's Day Thoughts From a Motherless Daughter
Recent Comments
5 Comments | Leave a Comment
Browse Our Archives
Related posts from Fumbling Toward Grace 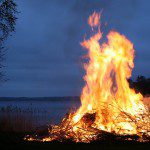