AshtaLakshmi: Eight Forms of the Goddess of Wealth 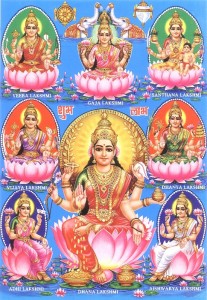 We often think of wealth in terms of one thing: numbers. How fat is our bank account? How are our investments growing? If the number on the bank account is dangerously low and we don’t even have investments, it’s hard to think of ourselves as rich. The word wealth actually refers to well-being and the Goddess of Wealth bestows blessings broader than pretty numbers.

Here are eight forms of wealth embodied by Lakshmi:

A couple of tidbits to keep in mind:

May you be blessed by Lakshmi in myriad ways, and may her sister Alakshmi be happy and content outside your door and not desire to come in.

The Future of Hinduism in America:...
Seeking Shanti
Related posts from Gathering Nectar