When they call your God a demon 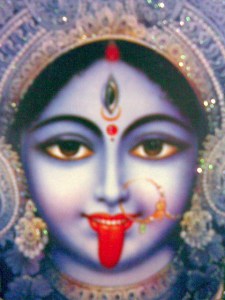 I strongly believe in interfaith work. I envision a future in which each person is free to practice their faith (or not) according to their own beliefs, conscience, choice. I imagine a future that goes even beyond interfaith to truly multifaith. I’ve always wished there were houses of worship that included more than one religion, with quiet meditation gardens and noisy temple rooms. Scripture study classes that study scriptures of various religions. And multifaith prayer groups — what would the world look like if people prayed together with members of other religions? I don’t mean a watered down prayer that says nothing so it can avoid offending anyone; I mean a group in which people meet together to discuss the issues in their lives and in the world and to pray their own heartfelt prayers. Together. And then went out into the world and tackled those same issues. Side-by-side. Different. But united. How powerful would that be?

Then reality slaps me in the face. Some people only consider their own religion a faith. Mine? Apparently it’s a spiritual bond that holds me captive. Something that needs broken. Yesterday I wrote about how the Bible calls for destroying the “idols” others worship; today I came across a blog that literally longs to see the day when Hindu deities are “toppled;” an author who wants to see “decapitated idols.”

It was a few weeks ago when someone sent me a link to a blog called Messy Theology, whose title I immediately loved (if my life could be summed up in two words, they’d be “messy” and “theology”). I didn’t have time to read it so I bookmarked it. This morning I clicked on the link and started reading the latest post. It starts:

Walking through the labyrinthine streets of the city that would become our home for many years, I was overwhelmed by the tangible presence of evil.

There are many things that could evoke a presence of evil. I was not prepared for this:

I had never encountered anything like this before: crowded temples around every bend, sacred shrines on every corner; brass bells clanging in my ears, heavy incense burning in my throat, and the bulging eyes of garishly-bedecked idols penetrating my vision.

Yes, she was talking about Hinduism. It gave her nightmares. She longs for the day when it can be defeated so her own religion can be exalted.

Hindus just finished celebrating Navratri. This blogger had covered that in her previous post (which is literally called Worship as Warfare). She writes:

Each fall, the ten days of Navratri (a festival of worship for the Hindu goddess Kali, also known as Durga) inevitably came with intensified spiritual warfare, intruding uninvited into every area of our lives. When I look back over those years, I can pinpoint multiple near-death experiences, major illnesses, the death of our unborn children, the break down of our technological equipment, the sudden collapse of significant relationships, and even violent demonic manifestations, all occurring during these ten days of the year.

I don’t even know what to say. The Goddess who defeats evil and brings us from darkness to light is somehow confused with some sort of Hollywood horror film special effects.

I can’t, of course, speak to her experiences. I wasn’t there and I have no doubt she suffered struggles. What I can say is that I have never experienced the Divine Mother that way. Durga is God Herself, and she has been there for me the way God has been there for this blogger when she calls on God using a different name.

Anti-Hindu prejudice isn’t always so blatant, but it’s often under the surface. Interfaith dialog too often tries to make Hinduism prove it deserves a seat with the religions that consider themselves the only Real Religions (they get called the Big Three even though only two of them are larger than Hinduism). I don’t play that game. I’m not a second-class citizen and my religion is not a second-rate faith.

I believe in interfaith work. I believe we have a long, long way to go.