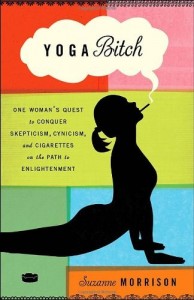 Yoga Bitch: One Woman’s Quest to Conquer Skepticism, Cynicism, and Cigarettes on the Path to Enlightenment

I picked this book up at the library on Saturday. My family had gone for a Star Wars event, and, being the only non-Star Wars fan, I sat it out upstairs in the stacks. I frequently browse the religion section, and I’d seen this book a few years back. With nothing else to do, I picked it up, and by the time everyone was ready to leave, I was already 75 pages in. I brought it home and finished it the same night, despite the skeptical looks my husband and kids gave me (I am the only person who failed to even notice the woman’s cigarette on the book’s cover).

I wish people who teach stretching classes were called yoga instructors or something, because an exercise teacher is not automatically a yogi. I once met someone who said, “I’m a yogi and I eat steak.” Luckily I didn’t laugh out loud — I nearly did, and not because they eat steak. My immediate thought was, “No, you’re not” a yogi.  Are you “self-controlled and free from selfish passions” (you always choose shreya, and are never led astray by preya)? Do you always remember God? Are you attached to nothing else? Do you know how to pull all of your prana within yourself and unite yourself to God alone? These are the criteria by which Krishna says, “Such a person is a true yogi.”

Imagine if you met someone who said, “I’m a Catholic saint.” Yoga Bitch uses “yogis” and “yoginis” to mean anyone who happens to take yoga classes. They may well be on the path of yoga, as devout Catholics are on the path of sanctification. Krishna does promise that none of our effort on the path is wasted; he doesn’t promise instant union with God now that you’ve bought your Lululemon pants and pink Thermoplastic elastomer mat.

This book shares some similarities with Eat, Pray, Love, especially in that the author broods about her love life and goes to Bali for a few months.  Of the religion she finds there, she writes:

Balinese Hinduism incorporates many yoga practices, but not the same kind of yoga we do. Theirs is a bhakti yoga, which is a devotional yoga — no exercise, just lots of rituals devoted to pleasing God. It’s what we Catholics call a “smells and bells” religion.

The author’s own Catholicism, or lapsed Catholicism, is a major theme in the book. This leads to one thing I have a complaint about (which is not the author’s fault, but which needs addressed). She says on page 82,

I’m feeling a little depressed today. Lou was being muy pantheistic in class this morning. Well, I guess he’s always pantheistic in the sense that he sees the universe as God and God as the universe — all that We are all One Self business — but today he was treating all religions as yoga. We were chanting when he switched from the Sanskrit Om Namah Shivaya to Kyrie Eliesion, Christe Eleison, Kyrie Eleison. My Mouth opened but the words wouldn’t come out…

Let me be clear: I have no problem whatsoever with the Kyrie Eleison chant. I have heard stunning renditions of this chant. I didn’t grow up Catholic (I didn’t even know Catholics used this chant; I associated it entirely with the Greek Orthodox), so I don’t have years and years of negative associations, and I can appreciate the chant for its beauty.

Kyrie Eleison means, “Lord have mercy.” When the author complains to her instructor that she didn’t come all the way to Bali to chant, “Lord have mercy” in yoga class, this is the answer she receives (page 91):

“Answer me this,” she said. “Do you like chanting in Sanskrit?”

“Yes! Why can’t we just stick to Sanskrit?”

“Well, you realize we’re essentially saying the same things. We’re asking God for mercy. It seems to me that, since you can chant in Sanskrit but not in Greek, your problem isn’t with God. It’s with language.”

And that was that. She stood up and left the wantilan…

I have two issues: the smaller one is that the yoga instructor dismissed her problems with Catholicism’s ideas about God and walked away. The larger one is that she lied.

God isn’t angry with you. There is no reason to beg him for mercy.

If your actions are wrong, you won’t enjoy their consequences. You’ll be unhappy about this, but God won’t be seething with anger, ready to punish you. When I mess up, I pray, “I’ve blown it again! I made the same stupid mistake and now I have to suffer the same unwanted consequences. Help me not to be so stupid next time.” The highest prayer in Hinduism is for wisdom to flood our minds like sunlight floods the earth. Swamiji always says there is no situation in which wisdom is the wrong thing to pray for.

But mercy? I’ve never been taught a mantra like that.

This problem is with the way American Yoga is taught; it’s not a problem with Suzanne Morrison’s book, which I enjoyed.

October 4, 2014
When they call your God a demon
Next Post