A few days ago, my husband mentioned that there was a Hindi film released December 19th which had already become the highest grossing Bollywood film ever in international markets and which is the highest grossing foreign film in the US in 2014. “Also,” he said, “It has some actors you like.”

“I’m not interested unless one of them is named Aamir,” I said. 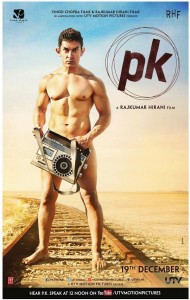 Dublin, Ohio, a suburb of Columbus, has the fourth-largest Desi population in the United States. If a Hindi film is playing in the US, that would be the place nearest us to watch it. But…last year we went shopping in Columbus the week after Christmas and it was crowded unlike anything I’d seen in my life. Everyone, it seemed, had gotten gift cards they wanted to spend. So I wasn’t in any hurry to head into town for a movie during crazed shopping days. Anyway, Into the Woods is the movie that I — a die-hard fairy tale fan– want to see in theaters soon. That’s why I have not yet seen PK.

This morning, to my surprise, the Washington Post was talking about the film. Hindus, it seems, are up in arms about the film and want it banned. What’s this?

My husband heard a bit about the plot on the radio and his impression was that it pokes fun at fraud gurus and is along the lines of OMG in that respect. I liked OMG enough to watch it twice, but it was a bit offensive in places. I don’t know if PK is getting this criticism because it’s more offensive or just because it’s a bigger film to begin with.

One thing films like OMG and, from what I’ve read, PK, pick on about Hinduism is the “meaningless rituals.” The obvious response is that they aren’t meaningless; in fact they’re the opposite of meaningless in that every aspect of every ritual has a specific meaning. Whether people know the meaning or just follow the ritual is another matter.

Beyond whether you find a particular ritual meaningful, I’d argue that humans innately need rituals. Some humans are more hard-wired for ritual than others, just like some humans need more romance than others (and it hasn’t escaped my notice that the “things” of romance and ritual are the same: flowers, candles, music, food — or that the harshest critics of ritual and romance are men, who possibly need them less).

A few years ago, when Julia Roberts was filming Eat Pray Love, there were people in India who were upset because they couldn’t celebrate Navratri at their local temple because of the film. Atheists were commenting on the story, saying that religion is stupid. But even the nonreligious celebrate holidays. What if children in your town couldn’t trick-or-treat because someone from another country was filming a movie? Secular holidays with the secular rituals, like Halloween and Super Bowl Sunday, are fast becoming the biggest holidays of the year in the United States.

Where there is a lack of ritual, humans create them:

Whether you personally find meaning in rituals or not, what about this comment from the Washington Post article:

Popular yoga guru Baba Ramdev urged Hindus to boycott the movie and “organize themselves to protect their religion and culture just like Muslim and Christian groups do.”

Is that really how Hindus should react? I definitely don’t want to be associated with any group who would threaten to literally behead someone for blasphemy. (Unlike Islam, Christianity get ridiculed constantly in film, on television, and just about anywhere and everywhere.) Or do Hindus want to be like North Korea and throw a tantrum and start hacking anyone who makes a film they don’t like? As an American, I value freedom of speech. Sometimes that means being offended. When I look at regimes that don’t allow freedom of speech, there isn’t one I’d rather move to.

I wish that pop culture didn’t ridicule religion as harshly as it does. I’m sad at the generation of young people growing up without anything to believe in and afraid to admit they need anything to believe in. I don’t think the correct alternative is harsh suppression of criticism and blind indoctrination.

These are just my initial thoughts on a film I have not yet viewed. If/when I watch it, I’m sure to have other thoughts. In the meantime, I’m going to spend time engaging in meaningless rituals like thinking about my goals for the coming year and watching a ball drop. We could just change the calendar on Thursday morning without this nonsense, but we’re going to stay up late and drink our Yoda Soda. Happy New Year!

December 16, 2014
Two Christmas books even non-Christians will enjoy
Next Post 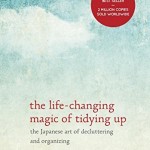