Why prohibit onions and garlic?

Devotees of Vishnu don’t eat onions and garlic. Food they are allowed to eat is often called “vaishnav” food. Since they’re also not allowed to eat meat, a lot of people use “vaishnav” to mean “vegetarian.”  This can lead to confusion. If a Hindu says they abstain from onions and garlic because they’re vegetarian, people will start arguing with them that those are plants and therefore totally vegetarian. This concept, vaishnav food, is more similar to kosher or halal. It means the food rules for the devout. A bacon cheeseburger, for example, is not kosher or halal or vaishnav.

The question I’ve always wondered is why.

I’ll be upfront here: I cook with onions and garlic all the time. Almost every time I go into the kitchen, I start the meal prep by chopping an onion and a few cloves a garlic. I have no intention of giving them up.

I’ve known people who’ve died from dengue fever, which is transmitted by mosquito bites. Though most of us don’t live in fear of malaria — we no longer have it in the US, and India has powerful medicine to combat it — according to the World Health Organization, more than 3.2 billion people are still at risk (about half the world population). One child under the age of five dies of malaria each minute, most of them in Africa. Diseases carried by mosquitoes kill 725,000 people a year, which is more deaths than those caused by all the things the news tells you to worry about combined.

What do dengue fever and malaria have to do with onions and garlic? Both diseases are deadly. Both are transmitted by mosquitoes. Garlic makes you unattractive to mosquitoes. Yes, eating garlic prevents more than vampire attacks: it wards off other bloodsucking killers.

Here’s my opinion, and you should know that it differs from that of most Hindus: I think garlic is our friend. It’s a plant that, when eaten, helps protect us from our deadliest threat. Garlic, to me, is sacred. You will not convince me that God doesn’t want people to eat garlic.

You can imagine that, since I disagree with a rule, that I’ve been more motivated than most to find out its origin.

The most common explanation I’ve heard is that onions and garlic increase desire. This always sounded absurd to me because everyone knows you can’t eat onions or garlic on a first date or before a job interview. They decrease desire — literally make you less desirable. Don’t they? 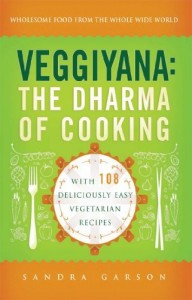 Last night I was reading a Buddhist cookbook called Veggiyana (as in veggie yana, the vegetarian path). It has 108 recipes, none of which I’ve tried, but it also has quotes and essays and is a great read.

This part also talked about the prohibition on onions and garlic and it finally explained it in a way that made sense to me:

The fear of arousing a different hunger is another reason Chinese Buddhists decided a cook must abandon garlic, chives, onion, and leek. Because these have historically been the very ingredients Chinese cooks relied on in their quest for flavor, their tastiness was taken to be the cause of attraction to and craving for food.

That’s when I understood. I’d interpreted “desire” as lust. Garlic doesn’t increase lust. But “desire” meant gluttony. As in, “Aromatics make the food taste better and that’s why you eat too much.” This also ties in with the part about abstaining from meat: onions and garlic may increase the desire for meat since they’re often served with it. Just as tofu with barbecue sauce makes people say, “You know what this would be good with? Pulled pork!”

So now I know. The prohibition on onions and garlic is because they’re believed to cause, not sexual desire, but desire to overeat. Most people trying to eat a healthy diet already abstain from high-fructose corn syrup and MSG, but it should be noted that those are also known to contribute to food cravings. If you’re fasting or dieting or doing a cleanse, you may want to avoid those foods along with your own trigger foods. Unless you’re fasting while camping in a swampy area. Then I suggest as much garlic as possible (and maybe take a citronella candle and apply DEET to your skin).

February 27, 2015 Is any diet truly sattvic?
Recent Comments
0 | Leave a Comment
Browse Our Archives
get the latest from
Hindu
Sign up for our newsletter
POPULAR AT PATHEOS Hindu
1

Finding the Goddess Within: Protect Us...
Seeking Shanti
Related posts from Gathering Nectar