The tyranny of unread books

When my husband first met me, he asked what I like to do.

Since he was asking for ideas of things we could do together, he asked, “What else do you like to do?”

“I like to go to bookstores and look for more things to read.”

Inevitably, I have a lot of books. When I was fresh out of college, I could somehow manage to read three or four books each week without it interfering in the rest of my life. As the years passed, I don’t read as fast and I’m often distracted and life is more chaotic. Now I read three or four books each month and browse the rest. Eventually I learned to buy fewer books, but in the meantime I accumulated many books that I fully intended to read but never did. 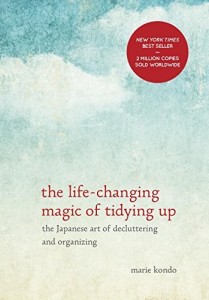 This month I’m working through Marie Kondo’s The Life-Changing Magic of Tidying Up. She has a specific order in which to declutter, starting with clothes, followed by books. I haven’t followed her advice about clothes at the outset because I changed some of my habits and lost about 18 pounds since writing Fat Karma. All of the clothes I own are destined to be decluttered, but I’m not quite ready to buy an entirely new wardrobe yet. So I’m starting with books. Kondo says:

Unread books accumulate. The problem with books that we intend to read sometime is that they are far harder to part with than the ones we have already read.

She goes on to explain:

People with large book collections are almost always diligent learners. This is why it’s not unusual to see many references and study guides in my client’s bookcases…When they explain why they hang on to them, their answers are all about what they intend to do “someday.”

Isn’t that the truth? The problem is that you buy a book about something you want to learn. You don’t read it. Five years later you’ve bought all the best books about that topic and read none of them (tell me I’m not the only person who does this!). Now you can’t simply pick one up at random and read it. You have enough books here to earn a degree in the topic. You feel like you need to design a curriculum and study the books in a logical sequence. You don’t have the time or energy to do that right now, so it stays on your list of someday.

Hinduism teaches that the way to success is to focus on a goal so that it’s the only thing you see and to aim your intention like an arrow. Some of the biggest heroes in the epics, like Rama and Arjun, are archers, and their ability to hit their targets is used metaphorically to teach us the proper way of taking action. It’s no coincidence that Rama is an avatar of Vishnu, whose shakti is Lakshmi, or that one of Arjun’s names is Dhananjaya, which means to win wealth.

If the way to success is complete focus of our attention on our goals, then what does that mean about all these things we intend to learn or do “someday”?

One of the reasons Ganesh and Lakshmi are so often worshiped together is that Ganesh removes the obstacles and Lakshmi helps us reach our target (laksh actually means a goal or target). We won’t make much progress toward our goals if we’re weighed down with hundreds of pounds of random things we might want to do someday. If I packed all my unread books into a giant backpack, I wouldn’t even be able to walk.

That’s why I’m pulling all of my books off all of their shelves (they aren’t even in the same part of the house!) and putting them into one giant pile.  Half Price Books will be getting several boxes of them this weekend, and the rest will go into what Kondo calls my “personal Book Hall of Fame.” She says:

Imagine what it would be like to have a bookshelf filled only with books that you really love. Isn’t that image spellbinding? For someone who loves books, what greater happiness could there be?

February 4, 2015 Why prohibit onions and garlic?
Recent Comments
0 | Leave a Comment
Browse Our Archives
get the latest from
Hindu
Sign up for our newsletter
POPULAR AT PATHEOS Hindu
1