3 Gates of the Dead 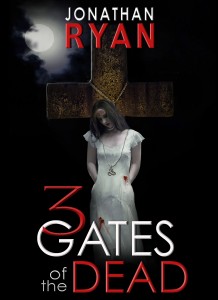 Where? Amazon, Barnes and Noble, Hearts and Minds Books, Powell’s and your local bookstore.

Conflicted with his faith in God and the hypocrisy of the church, Aidan Schaeffer, a young assistant pastor, is in a constant state of spiritual turmoil. When Aidan learns that his ex-fiancée is the first victim in a string of ritualistic killings, he finds himself catapulted into an even deeper fight. Tormented by demonic threats and haunted by spirits, Aidan throws himself into investigating Amanda’s death, all the while supernatural forces have begun to attack the people around him. The more questions he asks, the more he is drawn into the world of a mysterious Anglican priest, a paranormal investigation group and a rogue female detective investigating the murders. As the gruesome rituals escalate, ancient hidden secrets and an evil long buried threaten to rip apart Aidan’s world.

Praise for 3 Gates of the Dead

Ryan’s first novel skillfully blends theology, murder mystery, horror, and paranormal investigation through one man’s struggle with his belief in God. Solid characterization and a grounding in his subject matter make this series opener a real attraction for fans of The Exorcist and the darker fiction of C.S. Lewis and Charles Williams.

“. . . an intense, compelling story that keeps the reader thoroughly engaged . . . In a story about good versus evil, Jonathan Ryan brings an old-school vibe back to contemporary horror.”

“3 Gates of the Dead, by Jonathan Ryan is a roller coaster ride of a horror story – the suspense keeps building and you know when you hit the other side you are going to come out screaming – but you can’t help turning the pages anyway.

The struggle of faith juxtaposed with the onslaught of things we aren’t supposed to believe strikes a deep chord with many people in this day and age, and when blended with fear of the unknown and the temeritous virtue of the overtly horrific, 3 Gates of the Dead brought me, all at once, to that place of intellectual terror that only results in pure joy over a book that so immediately transports to other realms of the deeply macabre in a primordial, Lovecraftian scope. It is more than obvious that Jonathan Ryan has a firm grasp on crisis of belief, as well as a keen insight into the things that send shivers down our necks.

“Jonathan Ryan’s captivating writing style, his attention to detail in his characters, and his grasp of what truly scares people, makes Three Gates of the Dead a must read for fans of horror and suspense. Adding the element of romance to this chilling tale made me love this story even more and left me hungry for its sequel, The Dark Bride. Warning: Your electric bill will go up from having to sleep with the lights on.”

Dark Forces Descend upon Ohio… Following the Grinning Man’s resurrection, strange occurrences plague the city. After discovering a ritualistic animal sacrifice, Jen calls Aidan and Father Neal for help. The Dark Bride is coming… When Father Neal deciphers a Voodoo message with a dire warning, he reveals he is part of the Order of the Five Sorrows: a group dedicated to fighting evil with the use of holy objects present at Christ s crucifixion and Aidan is destined to become a member. The Supernatural Unleashed… Still reeling from Father Neal’s revelation, Aidan assists his friend Brian by investigating a series of unexplained events at his farm, including eerie lights in the fields at night and his daughter s fixation with an invisible friend. After women with mysterious powers appear, who are hunting down a witch from the 1600s, the group embarks on a perilous journey to destroy the Dark Bride before the Grinning Man s true purpose can come to pass . . . but they will be drawn into a horrific battle that some will not survive.

Order at Amazon, Barnes and Noble, and Hearts and Minds Book Store.

“For those who like to mix deep theological debate with full-throttle horror, there’s no better bet than the works of the Catholic master of the macabre, Jonathan Ryan.”

“[Dark Bride] successfully knits religion, demonology and suspense to produce a tapestry of excitement and originality that will please any fan of the genre.”

Author of The Devil’s Advocate and The Terrorist’s Holiday

Literary Scholar and author of The Annotated Guide to Stephen King

“Dark Bride is scary, smart, fun…it’s entertaining and thought-provoking. This is how I like to spend my time.”