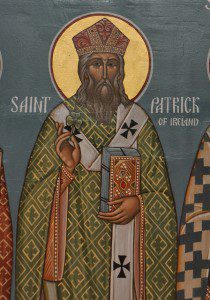 Instead of celebrating St. Patrick’s Day by just wearing green, making a big deal about being Irish, drinking green beer, or marching in parades, try reading the works of St. Patrick and reflecting on his Christian faith and convictions.

Observe St. Patrick’s Day this year by reading the great missionary’s own story, as he tells about his life and confesses his faith in Christ.

Read “The Confession of St. Patrick” after the jump.

Also read his beautiful poem/meditation/hymn “St. Patrick’s Breastplate,” also known as “Christ within me, Christ behind me, Christ before me.”

And read our earlier post The True Meaning of St. Patrick’s Day.  Note the link to How the Irish Saved Civilization and reflect, who is going to save it today?

1. I, Patrick, a sinner, a most simple countryman, the least of all the faithful and most contemptible to many, had for father the deacon Calpurnius, son of the late Potitus, a priest, of the settlement [vicus] of Bannavem Taburniae; he had a small villa nearby where I was taken captive. I was at that time about sixteen years of age. I did not, indeed, know the true God; and I was taken into captivity in Ireland with many thousands of people, according to our deserts, for quite drawn away from God, we did not keep his precepts, nor were we obedient to our priests who used to remind us of our salvation. And the Lord brought down on us the fury of his being and scattered us among many nations, even to the ends of the earth, where I, in my smallness, am now to be found among foreigners.

2. And there the Lord opened my mind to an awareness of my unbelief, in order that, even so late, I might remember my transgressions and turn with all my heart to the Lord my God, who had regard for my insignificance and pitied my youth and ignorance. And he watched over me before I knew him, and before I learned sense or even distinguished between good and evil, and he protected me, and consoled me as a father would his son.

3. Therefore, indeed, I cannot keep silent, nor would it be proper, so many favours and graces has the Lord deigned to bestow on me in the land of my captivity. For after chastisement from God, and recognizing him, our way to repay him is to exalt him and confess his wonders before every nation under heaven.

4. For there is no other God, nor ever was before, nor shall be hereafter, but God the Father, unbegotten and without beginning, in whom all things began, whose are all things, as we have been taught; and his son Jesus Christ, who manifestly always existed with the Father, before the beginning of time in the spirit with the Father, indescribably begotten before all things, and all things visible and invisible were made by him. He was made man, conquered death and was received into Heaven, to the Father who gave him all power over every name in Heaven and on Earth and in Hell, so that every tongue should confess that Jesus Christ is Lord and God, in whom we believe. And we look to his imminent coming again, the judge of the living and the dead, who will render to each according to his deeds. And he poured out his Holy Spirit on us in abundance, the gift and pledge of immortality, which makes the believers and the obedient into sons of God and co-heirs of Christ who is revealed, and we worship one God in the Trinity of holy name.

5. He himself said through the prophet: ‘Call upon me in the day of’ trouble; I will deliver you, and you shall glorify me.’ And again: ‘It is right to reveal and publish abroad the works of God.’

6. I am imperfect in many things, nevertheless I want my brethren and kinsfolk to know my nature so that they may be able to perceive my soul’s desire.