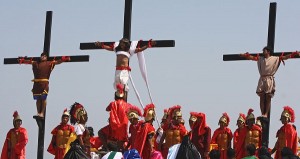 I would talk more about Paul’s visions, except that I’ve had none like them myself and neither have most of you.  In fact, the more I study the life of St. Paul, the more I realize that there are certain aspects of his life that we should imitate (which he himself tells the Corinthians to do in 1 Corinthians 4:16), and there are other aspects we shouldn’t attempt to imitate.

One of the dangers some Christians face is in seeking after the visions and revelations that St. Paul the apostle had, when God never intended for most of us to have such visions.  To seek after such visions is, in fact, a matter of pride, for these visions are not something we can produce ourselves and are not necessary for a faithful Christian life.  As far as Paul’s revelations go, next time God has ordained you to be an apostle and writer of Holy Scripture, let me know.

Or take Paul’s conversion.  Most of us will not be knocked down and see a vision of the resurrected Christ who gives us an explicit commission.  We make the mistake of thinking that our lives in Christ will be dramatic as was Paul’s.  But what do we do when it turns out that God’s will for our lives is something much more mundane and less exciting?  Do we feel cheated, or do we seek after excitements and entertainment?  God forbid!

But there are parts of Paul’s life which we can imitate, and one of the chief of these is in the way he accepted and used his suffering.  Wouldn’t you know?  We get to be like Paul in his sufferings but not in his conversion and visions and revelations.  But isn’t it interesting that Paul doesn’t boast about his visions or conversion: in fact, he veils these extraordinary experiences.  He says, in essence, “I have this friend, yeah that’s right, this, uh, friend, who had visions and revelations . . . .”  But of his suffering he says, “Therefore most gladly I will rather boast in my infirmities.”

Why is this?  Paul is very concerned that God and God alone will receive the glory for what He has done in Paul’s life, and not Paul himself.  If Paul persists in glorying in his own extraordinary experiences, there will be a temptation by all (including Paul) to become proud and to look at man instead of God.  But when it comes to suffering and weakness, it is clear, suddenly, that it is all of God.  This is why Paul spoke at length of the earthen vessels in Chapter 4 and why he goes back to the same theme here.

Unlike Paul’s ecstatic visions, there is a lot we can learn from Paul’s thorn in the flesh.  We learn, first of all, that there will be suffering and trouble in the life of the Christian.  We learn, second, that while some of the suffering in our lives may be messengers of Satan, it is used by God to produce humility in His saints.  Once again, I find this principle at work: what Satan and men mean for evil, God means for good in the lives of His saints.

Notice, too, that St. Paul, the same Paul who was an apostle and who had seen these visions and been given these revelations, a mighty man of prayer, prays three times for the thorn in the flesh to be removed.  And God doesn’t do it.  What else are we to conclude about such suffering other than that God has a holy and loving purpose in it, to produce in us humility, faith, and all of the other fruits of the Spirit.  When, however, we attempt to escape suffering, we hinder the very work of the Spirit in our lives, which so often works in and through suffering, and not apart from it.

Therefore, Paul boasts in his suffering, not saying, “Hey, look at me – I’ve suffered more than all of you girly-men put together!” but to say “Look at your own suffering and weakness, and in it see the strength of the Lord.”

The bottom line is this: God’s strength is made perfect in your weakness.  Therefore, never forget how weak you are.  But since we will forget this, left to our own, God gives us His holy messengers of pain and suffering, which is the feedback mechanism of his spiritual nervous system, to keep all of us lepers from losing pieces of ourselves because we couldn’t feel the danger we were in.

More than this, Paul takes pleasure in his infirmities!  Is Paul some kind of holy masochist?  What’s going on here?  I don’t believe that Paul takes pleasure in the pain and infirmities themselves but in the presence of Christ who comes to him in strength, when he cries out in weakness.  Paul can take pleasure in his suffering and weakness, because it is in that suffering and weakness that Jesus Christ comes to him, suffering with Paul and asking Paul to share in His suffering.

Therefore, let us imitate Paul in learning the lessons that God’s grace is always sufficient for us; that God’s strength is made perfect in our weakness; and that when we are weak we are strong because Jesus is with us once again.

Prayer:  O Lord Jesus, thank You for speaking through Your holy apostle Paul to me this morning.  Thank You for appearing in my life, even if often only in a small, still voice.  Thank You that no matter how weak and suffering I am, that You promise to be with me, if only I will accept Your strength that comes in the form of my own weakness.  Give me the strength to see You in my weakness today.

Resolution:  I resolve to accept my suffering, troubles, infirmities, and weaknesses as a thorn in the flesh that, regardless of their immediate cause, are messengers of God to remind me of His grace and strength and my own humility.

An Open Apology to Kaitlin Curtice...
Anabaptist Revisions
Related posts from Give Us This Day