The Conversion of St. Paul – Galatians 1 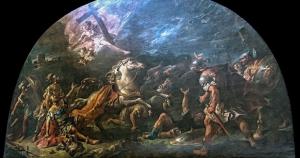 “But it pleased God, who separated me from my mother’s womb and called me through His grace, to reveal His Son in me, that I might preach Him among the Gentiles” (verse 15).

This is an absolutely amazing statement!  But how many times have you read the book of Galatians and not noticed it, in your rush to get to the “real” message of Galatians and Paul’s teaching on legalism?  The truth is, that this time through Paul’s letter to the Galatians (and I’ve made it through the first chapter now), I see another real message from Paul, and it’s this four-part gospel:

This, I contend, is the real message of St. Paul, not only in his letter to the Galatians but also throughout his corpus of letters.  The lawlessness that Paul later addresses in Galatians is only an attempt to remedy the fact that the Galatians have not paid proper attention to Paul’s real message, which I have outlined above.  They have forgotten about God and His sovereignty; they have forgotten His grace; and they are in the process of forfeiting the incredible privilege of being the means by which God reveals His Son to the world.

Paul’s gospel is so heavy and dense with meaning to me that I need to try to digest it slowly.  The first part – that God is sovereign – is the easiest part for me to accept, at least intellectually.  “God is sovereign,” I read.  To which I respond, “Well, duh!”  Of course God is sovereign – that’s why He’s God!

But what is easy to accept with the head is not always easy to remember with the heart.  You could ask me at any time of day on any day if I believed God was absolutely sovereign, and I’d say, “Yes, of course,” without hesitation.  But if you then bothered to hang around and hang out with me the rest of the day, you’d notice something incredible: that soon I would begin to act in ways that strongly suggested I didn’t believe God was completely in charge.  In our lives, and often even in our theologies, we act as if God is not completely in control of everything.  We act as if it is up to us to save ourselves or save the world.  (Sometimes by doing the most paltry and non-salvific and humorous things, such as screwing in a fluorescent light bulb.  “There ya go world,” I say, after manfully fighting with the threads of a light bulb and mightily descending from the stool with a vanquished incandescent light bulb in hand.  “I, Sir Charles, have saved you.”  To which the world goes, “Then how come I still groan so much!”)

We act as if we are the ones who first seek out God and first love Him and first choose Him.  “Boo hoo hoo hoo!  What about free will!!”  The problem is that our free wills, left unchosen by God, have freely chosen to be in bondage.  “Help, I’m a human, and I can’t get up!” we cry.  But we really don’t want to, because it means giving up our paltry sovereignty.

And the first part of Paul’s gospel, that God is sovereign, is the easy part for me to understand!  The second part is both easier and more difficult: “God, by His grace, has called us before we were even born.”  Once I’ve accepted that God is sovereign, everything else falls into place, and nothing is impossible.  That’s the easy part: that a sovereign God could and would have chosen me before I was even born.  It’s then that I remember that God is outside of time and that all is like the present to Him.  He sees it all at once so that when He existed before time and when He created the world and when He chose me to live with Him and when He chose me to write, “He sees it all at once so that . . .” are all with Him all the time.

That part is a little harder to understand.  But even this is not the hardest part, because it only affects my head and gives me Excedrin Headache #10,317.  What is much bigger and more overwhelming is not that God chooses men, but that He chose me.  Before I had done good or evil, before I loved Him, knowing that I would sin and not love Him, seeing all things at once – God chose me.  It’s not just St. Paul but also you and me that God has chosen to separate from the world from our mother’s wombs.

God chose me – the weakest, smallest member of the team!  Why would He do such a thing?  Usually those who are the most powerful don’t give the weakest and smallest the time of day.  Why would the One who is All Powerful do this?  His sovereign power alone can’t explain it: it must be because of His Sovereign Grace, which is to say His Sovereign Love.  The All Powerful One gives what He did not have to give to one who did not deserve it.

That’s why this point is so difficult – because it is so overwhelmingly different from the way of the world and because it is so profoundly good for me!  It might be scary to think that I’m not actually in control, but when I remember that the One who is sovereign over my life is both all powerful and full of love, then it’s actually a rather warm and cozy place to be.

But it doesn’t stop there.  God, the Sovereign One, isn’t done with me yet.  He has chosen me not just because He can but also because He wants to reclaim me and re-create me in His image.  He wants to show His glory through me, saying in effect, “If you thought my first trick in creating the world and creating Charles David Erlandson was a good one, wait ‘til the second act, where I’ll take this worthless creature of mine, give him new life, and then make him the very one by whom I will re-create others.  Ha!”

God called Paul, the Saul of Tarsus who persecuted the church of God beyond measure and tried to destroy it, through His grace, to reveal His Son in him.  Now that’s amazing!  Not just that God chooses men to use to reveal Himself but that He chose him – that despicable creature, Saul of Tarsus, who persecuted Jesus Christ and wanted to kill Him by killing His Church!

And this is why God has chosen me and you – not just Paul: He desires to use you to reveal His Son, Jesus Christ, through you, to others.  What is your response to this?  When God says, “I am God and am absolutely sovereign and have chosen you before you were born – so that I could show myself to other people through you” – what’s your response?  Do we suddenly doubt God’s sovereignty?  Do we manufacture a false humility, batting our eyes and coyly saying, “Why, little ol’ me?”  Do we doubt that God has chosen us so that He might use us as He used Paul?

No, I’m not called to be St. Paul and neither are you.  But you and I are called to be you and I, re-created in the image of God, built up in the image of the Son, graced by the Holy Spirit with every good gift necessary to do God’s will, and commissioned by Almighty God to make disciples of the nations.  Do you disbelieve that God has made you an apostle, a “sent one,” sent to do His will, sent to reveal His Son to others?  These things are undoubtedly true, but I find that only a small percentage of Christians act as if they truly believe them.  Incredible, yes, but true nonetheless.

Finally, when the sovereign Lord chooses you to reveal His Son, He reclaims and restores and recreates and redeems and renews what He has already created in you.  I don’t believe that the spiritual gifts we receive from God are usually entirely new gifts given at baptism or at some other point, in which case we would look and feel to everyone else to be a truly different person (and not just different in our spiritual condition).  I believe that when God gives us His Spirit, He redeems and reclaims the natural gifts He has already given us but that are marred by sin and used for evil purposes.

This would explain why, even though God sovereignly chooses us and commissions and equips us, it often takes a long time and seems imperceptible or altogether invisible.  God didn’t destroy the world and make a new one: He redeemed the old one, including us.  He uses the “natural” means in our lives: in fact, He glories to work in small and “natural” ways, hiding Himself in His creation, as He hid Himself in the humanity of Jesus Christ.  Jesus looked like a normal 1st century Jew, and yet He wasn’t.  I look like a normal 21st century American (Yes, I know, I’ve just left myself open for about 5 minutes worth of one liners – and that’s just inside my own head!), but having the Holy Spirit dwell in me – I’m not.

Even the great St. Paul, after He had seen the most amazing revelation of Jesus Christ, didn’t immediately get up and become Super Apostle (imagine dramatic superhero music playing here).  He spent time in Arabia, and then back at Damascus.  God made use of Paul’s training as a Pharisee and as a student at the university at Tarsus.  After 3 years, he went up to Jerusalem to see Peter.  And then, 14 years later, Paul went up to Jerusalem again with Barnabas, and only then is he revealed as St. Paul: Super Apostle.

And Paul was a Super Apostle, made Super by the true superhero of our lives: Jesus Christ, who shares His super powers with us.  The same sovereign Lord who chose us, chose us in Jesus Christ, chose us to reveal Jesus Christ in us as we are in Him, and chose to use what He first created as us.  After God has so chosen and graced us, He actually equips us to truly participate in His grand and glorious work of redemption.

This is the Gospel of St. Paul; this is God’s pleasure in our lives.

Prayer:  Father, make me an instrument of Your holy will.  May I always acknowledge my own unworthiness before You and Your amazing grace in electing me.  Stir up the gifts of the Holy Spirit in my life that the fruits of the Spirit may have their increase in my life and the lives of those around me.  Amen.

January 24, 2016
Heresy Begins not in the Head but in the Heart
Next Post 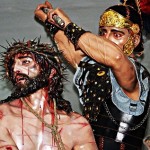 Evangelical
Matthew 27:27-44 - Christ, the Bullied One
Give Us This Day

Evangelical
Tuesday of Trinity 15 - Matthew 7:13-29
Give Us This Day
TRENDING AT PATHEOS Evangelical