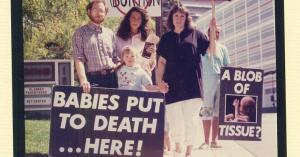 What is it about St. Paul that makes him so radical, so hardcore?

What has possessed him so that he seems like a fanatic even to Christians?

Some, such as Communists, become fanatics for the sake of an idea or an ideology.  Some become fanatics out of fear.  But St. Paul has shown us a more excellent reason to become a fanatic: so that we might know and live for Jesus Christ.

Actually, as every Christian should be aware, Jesus Christ was the original fanatic.  He is the one who called Paul and calls you and me to take up our cross daily, deny ourselves, and follow Him; He is the one who resolutely set out to Jerusalem, knowing that He would be crucified; and He is the one who took upon Him all the sins of the world when He didn’t have to.  That’s just, well, fanatical!

All St. Paul is doing is following Jesus in His fanaticism.

But fanaticism for Jesus Christ is not very fashionable or comfortable.  If you take this Christianity thing too far you’ll make a lot of people mad, perhaps most of all other Christians.  If you live out the radical call to discipleship, then you might make some of us Christians look bad.  You’ll be called a bigot and worse, people will feel uncomfortable around you, and your motives will be questioned.

In some places, you might even lose your life.

So what could possibly compel St. Paul to be a fanatic?

It is simply this: Paul wants to know Jesus Christ by living in Him and for Him.  Every one of us, even those who are not fanatics, have an ultimate goal.  Often, we haven’t even expressed this ultimate goal or thought much about it, but it’s there.  Some people live for leisure.  Their minds are on what they will do when they don’t have anything else that they have to do.  They often begrudge their work and complain about it because for them that isn’t their real life: they act (and sometimes) think as if the playtime they have earned is what’s most important.  For others, the work is the most important thing because it is the only thing that gives them meaning.  Others have money or possessions or power or prestige as their highest goals.

But for Paul it is to know Jesus Christ and live in Him and for Him.  Why does Paul give up all else for Jesus Christ?  He says it’s so that he “may gain Christ and be found in Him” (verses 8-9).  He says that he is a fanatic so that he “may know Him and the power of His resurrection, and the fellowship of His sufferings, being conformed to His death, if, by any means, I may attain to the resurrection from the dead” (verses 10-11.)

Uggggh!  Hey, Paul, did you have to bring that in?  Couldn’t you just have stopped at the part about the resurrection and then go on the other good part about the prize we might get?  But for Paul to follow Christ and be with Him is to be with Him in all parts of Him.  Paul understands that as Christ suffered for us, we must suffer for and in Him.  This is actually a part of our redemption, and therefore Paul wants to know the fellowship of Christ’s sufferings.  He wants all of Christ.

But where does such fanaticism lead?  Even if I were to theoretically accept in my head that I should make Christ my ultimate goal in life, what’s in it for me?  Where will it lead me?  I demand to know!

What Paul says his fanaticism has gotten him is the loss of all things.  What a sweet deal!  Whatever else Paul had gained in life, he counts it as loss for the sake of Jesus Christ (verse 7.)  He counts all things loss for the excellence of the knowledge of Jesus Christ (verse 8), in case we missed it the first time.  Paul considers that all of the vain things that charmed him most are like garbage before the excellence of Jesus Christ (verse 8.)  All of Paul’s attempts to save himself by his works, his zealousness for the Law, his persecution of Christians, and his great knowledge – he considers to be “rubbish.”  But “rubbish” is much too English and gentlemanly.  Paul is really saying he considers the things of his former life without Christ to be “refuse” (still too refined) or better yet: “dung,” “manure,” “excrement” or perhaps some more vulgar term for human waste.

Not only does Paul consider his life without Christ to be a loss, but he himself has apparently suffered the loss of many things for Christ (verse 8.)  We have only to look back at 2 Corinthians 11 and Paul’s litany of sufferings to see what he might mean.  Knowing that to choose Christ is to choose to suffer with and for Him, Paul still chooses Him.  Of course, Paul is no fool.  He also knows that to choose the fellowship of Christ’s suffering is to choose to attain to the resurrection from the dead (and to choose Christ’s resurrection is to choose His sufferings as well.)  After Christ had humbled himself to be born a human and to die on the cross, the Father exalted Him above all else.  Paul sees this clearly, and so should we.

How does Paul act as a result of his fanatic pursuit of Christ?  He could, perhaps, retreat to mystic contemplation and seek Him that way.  He could seek Him in his individual, personal, private life and make sure that he wasn’t obnoxious about his fanaticism.  He could think that because he had found Jesus Christ and received His grace that the race was over and he could now coast.

Or, he could realize that he has not yet been perfected in Christ and therefore relentlessly press on toward his goal (verse 12.)  Realizing once again the sovereign grace of Jesus Christ and also his own responsibility to respond faithfully, Paul says that he lays hold of that for which Christ Jesus has also laid hold of him (verse 12.)

St. Paul is relentless.  He is an Olympic athlete, training and exercising and racing so that he might be able to win the race he has been called to race.  With every thing he has, St. Paul the Fanatic presses toward the prize of the upward call of God in Christ Jesus (verse 14.)  Even though he surely already had a measure of the presence and power of Jesus Christ, Paul is not satisfied but seeks more of Jesus Christ.

So, do you still want to be a fanatic?

I want to so desire Jesus Christ – all of Him, including His sufferings – that I will be with Him and live in and for Him more and more throughout my life.  I want to be a fanatic and subordinate every other desire I have to my desire to follow Him, wherever He leads me.  I want to be a fanatic and sacrifice my life and all the stuff I want for myself so that His desires become my desires, and His will becomes my will.

I want to be able to say not only with my lips but also with my life that for me to live is Jesus Christ.

If this is what it means to be a fanatic and a Jesus freak, then sign me up!

Prayer:  Lord Jesus Christ, who willingly gave up all things for me and for the salvation of the world, give me a fervent desire to seek You above everything else in my life.  Help me to be willing to give up the things that lead me away from You and the things that are not good for my soul that I might know the fellowship of Your sufferings and the power and joy of Your resurrection.  Amen.

Resolution:  I resolve to set my heart to give up one of my things today for the sake of Jesus Christ and to use this as a means of remembering my ultimate goal in life.

January 29, 2015 Heaven
Recent Comments
0 | Leave a Comment
"Excellent exposition!"
Richard Lee Wednesday of Epiphany 1 – Ephesians ..."
"In your wonderful commentary you say "In Ephesians Chapter 2, Paul is not only concerned ..."
Richard Lee Tuesday of First Sunday after Epiphany ..."
"Correction: Jesus Christ Has a Body – and It’s the True Evangelical Church who obediently ..."
machgman Jesus Christ Has a Body – ..."
"You might want to include an editing process that occurred after some of the original ..."
Randy Thompson How Did We Get the Bible?
Browse Our Archives
get the latest from
Give Us This Day
Sign up for our newsletter
POPULAR AT PATHEOS Evangelical
1