How Pope Francis Exposed The Idolatry of Conservative Christianity

Many readers of my blog comment about my bias against conservatism and think that it is merely a political one. This isn’t true. My most ardent opposition to conservatism is fueled by the idolatry and heresy that has quietly overtaken Evangelical and Conservative Christianity. The faith has been betrayed by the symbiotic relationship between the Republican Party and Evangelical Christianity. There are countless articles that document this. Chapter 12 in my book outlines this in detail.

But most recently, the Pope’s visit to America has exposed clearly the true religion of conservatives. This was best summarized by this clip from Media Matters outlining the response to Pope Francis’ positions.

Nothing Pope Francis has said has been outside of the truest definition of Christianity. But because we have allowed our faith to be seamlessly intertwined with conservative politics, many believers can no longer discern between what Jesus would do and what Ronald Reagan would do.

Nevertheless, the moment anyone speaks against the sacred cow of capitalism — particularly trickle down economics — the veil is lifted, and we see what is at the core of theses so-called conservative Christians.

There is nothing more cherished than capitalism — particularly trickle down economics. This is lifted up higher than all of the references in the Bible that run counter to capitalistic thought. Some have even gone as far as to suggest that Jesus would have been a capitalist. But considering that Adam Smith did not publish The Wealth of Nations until 1776, it is safe to say that Jesus was not a capitalist.

And I’m sure in the comment section someone will refer to the scripture of the talents and the admonishment that the servant could have at least given it to the bankers to turn a profit. But this is juxtaposed with Christ chasing the bankers out of the temple and the Old Testament ban on certain types of usury (interest) which is at the core of our financial markets.

It is ironic that conservatives are willing to read the Bible liberally when it comes to justifying their worship of capitalism but read it with such orthodoxy when opposing gay marriage.

But if Pope Francis did nothing else, he has laid bare the real religious commitment of so many Republicans and conservatives: money. This is as far as they can go with their faith. Any scriptures, sermons, or leaders that speak contrary to the particular economic paradigm of their liking is dismissed.

So, no. I do not oppose the political religion that conservative Christianity has become merely because of ideological differences. I oppose it because at its core is the worship and love of money. And that love has been allowed to trump the heart of the Christian faith: compassion. 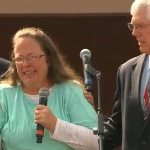 September 8, 2015
Let's Be Clear: Kim Davis is Pharaoh, Not Moses; Nebuchadnezzar, Not Daniel.
Next Post 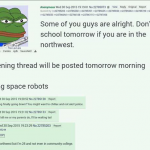