Children Before the Ravaging 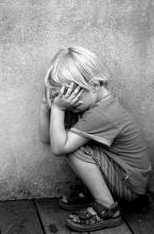 Even if you only saw the trailers for the 2005 film, The Exorcism of Emily Rose, you might recall the images of a young girl walking down the sidewalk, haunted by passersby who seem innocent enough until they draw close, when their faces are transmogrified into those of demons.

Those trailers scared the crap out of me.

Maybe they struck some close-held fear of insanity or possession: for years as a child I suffered from nightly dreams of the same thing, along with the occasional daytime vision. Or maybe I’m just a big fraidy cat. Either way, without the reliable promise of a steady bed partner for at least a month following, there was no way I was going to watch that movie in its entirety. (Please don’t tell the talented director, Scott Derrickson, who will be teaching at the Glen West Workshop later this summer.)

What has me thinking about this movie I’ve been too afraid to watch, is that lately I’ve been experiencing its opposite.

Just a few days ago, to give you an example of what I mean, I was sitting in a tedious meeting about a tedious project that has gone sideways in a half dozen bad directions, all of them traceable to the uncrossable chasm between technology whisperers and the rest of us. There is coding involved, and compatibility issues, and HTML 5 (the latest Lady Gaga of the website world, I’m learning, until it becomes—only after we’ve all invested thousands in her, mind you—another Britney Spears). There are half-witted technology salesmen and technology specialists and interpreters for the specialists, because while their native language is English, they have a way of rendering it alien.

It’s all just peachy. These kinds of projects put me in mind of a truth from H.L. Mencken: “Every normal man must be tempted at times to spit upon his hands, hoist the black flag, and begin slitting throats.”

I’m an impatient person. I get called into a meeting like this is when it’s really off the rails. I barely have the skill to turn on my phone, I have no problem making vendors exceedingly uncomfortable, and I’m not really going to contribute any good ideas. My purpose is to force the would-be aliens to explain—very slowly and simply, lest I beat them to bloody pulps with their own spindly arms—exactly how they are going to fix the problem, and how much it will cost.

So I’m sitting in this meeting and there is a spindly-armed tech guy with a permanent half-sneer fixed to his face and as he holds forth I am imagining a world in which it is legal to punch someone in the stomach when he really, really deserves it.

Suddenly I see this man as the boy he might have been. I see his tentative fingers exploring a toy, or perhaps his first computer. I see his eyes shying away from older, bigger boys. I see him excited that his father is finally home, or maybe wondering when his father will come home, or if his father will ever come home.

I try to imagine what must have transpired over twenty years, to make that imagined boy into this present man, only I can’t, any more than he can know my walk, or either of us can know yours.

All this made me think of my own children and their insecurities and the gentle places in them that might easily become subdued or coarsened as they fall in with tribes of children who carry their own hurts, their own broken places, each lashing out or holding back, each teaching those around him to follow suit.

I imagined my gentle Eli as a technology expert, sitting in a meeting where he fronts confidence, where he speaks computerese because it’s his language of safety. I imagined my talkative, nerdy Caleb talking on and on and on in that way he has, only as an adult. I imagined some jerk like me quietly judging and disliking the men he thinks my sons are.

I ended up praying, as I sat there with my mean little judgments, that my children encounter more grace than I am accustomed to giving. And now there are these visions all the time, unbidden. People I used to delight in secretly disdaining, I can’t help but imagining them as children.

C.S. Lewis wrote that every one of us is in the process of becoming either an immortal horror or an everlasting splendor. I don’t yet have the spiritual maturity to envision this in people. But these other visions, I can’t stop them, and something tells me I shouldn’t try. Maybe this new way of seeing is some small step of my own away from the direction of immortal horror. Perhaps it’s born of this deep-abiding worry for my own sons, who are growing so very fast now, so much faster than I expected.