First Position and the Competition Crucible 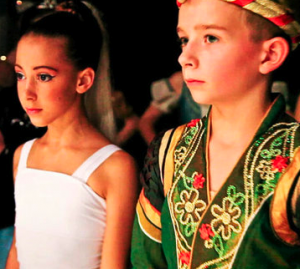 All of the dollars and expertise that produced The Avengers, Men in Black 3, and the rest of this summer’s block-busting movie events could never produce a spectacle as wondrous as eleven-year-old Aran Bell dancing his heart out.

Aran is reason enough for you to buy a ticket for First Position. That’s director Bess Kargman’s new documentary about young ballet dancers training to compete in New York’s Youth America Grand Prix. Her cameras roll as the dancers rehearse, and the tension inspired by the upcoming high-stakes competition rises from a simmer to a boil. There, young adult dancers can win places in great ballet companies, younger dancers can earn scholarships to world-class ballet schools, and even younger dancers can earn early recognition. Or, their dreams can come crashing down.

At first glance, Aran seems too tiny, too delicate to go anywhere near such an event. But this boy was born to dance. With the passion of a seasoned performer, he says, “I love ballet so much… it’s hard to explain.”

He needn’t try—his agility and grace are eloquent enough, and his dedication is undeniable: his rigorous training, his submission to vigorous critique, and his mind-boggling stretches. (Wait until you see the torture device he calls a foot stretcher. Ouch.) When he dances, you can’t take your eyes off him. X-rays would probably reveal that his insides are powered by tightly wound rubber bands.

He’s not the only bright light in First Position.

Michaela lost her parents and witnessed horrors in the Sierra Leone civil war before she was adopted by a Philadelphia couple and given a new life. And here she is, even though misconceptions about African-American women complicate her chances of success in the world of ballet.

A princess-obsessed high school senior from Maryland, Rebecca is fully aware that she fits an all-American Barbie-doll stereotype, but she won’t let that interfere with her aspirations.

And Joan (pronounced JOE-on) Sebastian, a sixteen-year-old from Colombia, hopes to become that country’s first ballet star so he can support his struggling family back home.

Even if you, like me, have never attended a ballet or felt much interest in dance, these kids will inspire you. Or, perhaps, they’ll leave you feeling wretched for your own lack of motivation and discipline.

I thought I’d seen too many of these kids-in-competition movies to be drawn back to the edge of my seat for another tournament-focused finale. But there I was, heart in my throat, knowing that the slightest misstep could be devastating.

The farther I get from First Position, the more I think this is a good documentary that could have been great.

Of the films in this developing kid-contender docu-genre, Spellbound—Jeffrey Blitz’s 2002 documentary about children and spelling bees—seems to have the most staying power. Blitz attends closely to his young subjects, savors their idiosyncrasies, acquaints us with their families, and exposes the consequences of such obsessions with revealing (and sometimes frightful) honesty. And he finds those lightning-strike moments that make documentaries exciting, moments that can only be captured by a patient, vigilant filmmaker.

First Position follows the Spellbound formula, but it lacks imagination, depth, and that sense of imminent surprise. Its subjects are quite impressive on and off the dance floor, but the film is so focused on the path to championship template that it gives insufficient attention to some important aspects of the dancers’ experiences, including their performances.

That’s the problem with this genre: Its suspenseful countdown to glorious achievements and heartbreaking failures is a narrow chute like an amusement park slide. Turning art into an ordeal, creativity into a contest, its details become mere variations along a familiar ride. I’d rather find fuller human stories, and have more space to enjoy the art itself.

Is this confining, predictable package the only way to make audiences sit still for a story about dreamers in pursuit of excellence?

I’m left with questions a more thoughtful film might have explored. I’m curious how these families afford the mind-boggling financial demands of a dancer’s development, costs that must prevent many—even most—of the world’s most promising dancers from ever reaching the stage. I’d like to know the long-term effects of such competition-driven pressure. Does this grueling lifestyle really equip dancers to do their best work? How many can sustain any sense of play or joy when they become so intent on impressing judges and besting competitors?

I question the idea that the crucible of competition is the place to discover an artist’s true quality. Is a student’s best work done during finals week? Would you judge which rose is most beautiful by choosing the one best able to survive a furnace or a fire-hose?

At the Grand Prix, Rebecca is bothered by her competitors’ unfriendliness, how they sneer when she wishes them good luck. She’s also worried that a one-minute performance does not give judges a good sense of a dancer’s talent. “You practice so hard,” Rebecca laments, “and then it’s like… not even a whole minute on stage, and you’re done. That’s it.”

Similarly, this film felt insufficient as an exhibition of each dancer’s gifts. We get sketchy portraits of each player’s daily life, snippets from interviews, highlights of their training, close-ups of their injuries, and close-ups of their parents’ and coaches’ furrowed brows during the tournament. And yes, it’ll spike your adrenalin and make you cheer. Don’t get me wrong—you should go see it.

But as a movie about talented youngsters, First Position never rises above routine stretches and basic exercises. The children dance—the movie doesn’t.

Jeffrey Overstreet is the author of four novels including Auralia’s Colors, and a “memoir of dangerous moviegoing” — Through a Screen Darkly. He is an award-winning film reviewer, a magazine editor, a speaker, a blogger, and a member of the Chrysostom Society. He’s celebrating 16 years of marriage to a beautiful poet. He’s writing a new novel and working toward a future in which he teaches creative writing and film studies.

June 12, 2012 Stations of the Cross on the A Train, Part One
Recent Comments
2 Comments | Leave a Comment
Browse Our Archives
Related posts from Good Letters