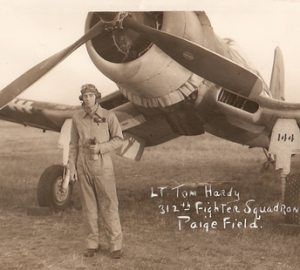 My cousin Tom Hardy died three weeks ago in Columbus, Mississippi, less than twenty miles from the plantation on which he’d been born some ninety-three years before. There are many people in a life that we would like to have known—Washington, Lincoln, Robert E. Lee; but such are the things of fancy. There are few that we would like to have known better; such are the things of regret.

I knew Tom; I would like to have known him better.

He was a man who would appear out of the sky from time to time, calling to say that he’d found himself near you. By this, I mean that when his travels in his airplane around the countryside brought him within a short drive, he would call and let us know that he had landed. A reunion would follow—perhaps a few hours—perhaps a whole day or night—but seldom was it planned. He would simply drop down out of the sky.

That was his preferred place, after all—the sky. It became so early in life, and practically by decree.

He told of a barnstormer in the 1920s whose biplane landed in a pasture outside his ancestral home. Excited, his mother—my grandmother’s sister—took him out to see the phenomenon. To Tom’s surprise, she paid the pilot’s fee and then climbed up into the cockpit. He never thought he’d see her again as the plane grew small blending into the broad, distant horizon.

Tragically, only five years later his mother left him for good, dying in childbirth. I suppose his mother must have been caught up in his thoughts whenever he found himself in a plane. The same might be said of his father, himself a pilot, killed in a crash at a young age.

But these personal tragedies never deterred Tom’s love of the sky. Later, he served in WWII’s Pacific Theatre, a marine fighter pilot who shot down three Japanese airplanes and went on a multitude of dramatic missions. He had fascinating mementos of his service, and could explain the intricacies of aerial warfare with the skill of both teacher and master.

He didn’t just visit by way of his plane though. He would take us up in it too. He even let me be the pilot one time, my attention so fixed that I lost sense of where we were. When I asked, he smiled and pointed downward, where I saw the outlines of our barn and house and my parents waving from below.

He also took me gliding, which I think must have been his true love.

Towed behind a plane by no more than a length of rope, the glider was set free high above the earth. Tom then maneuvered us among the rising thermals of air, each spiraling up beneath the clouds. All around, invisible, he explained, were these coiled currents, ascending in a quiet helix; the lovely task of the glider was to invite itself along for the trip, as though holding onto the fin of some great creature moving through a clear, silent sea.

We might have been made of paper that day, drifting down through air that held us gently, elegantly, in a courtly cascade that in time brought us back to the brown Mississippi prairie. If a man can be summed up by a motion, the motion of the glider was Tom.

But to speak of his life in the clouds is not to speak of all that he was. He was a great hunter and a charter member of the wonderful Magowah Gun Club, he loved to bike and to read, and was a boxer in his youth.

He ran the plantation his whole adult life, a mighty task—unromantic, unforgiving, unpredictable—to which any farmer can attest. And he had more to worry about than just the survival of the place his people had owned since before the Civil War. He worried about all the families that had lived there since the sharecropper days. He kept them on even when more mechanized methods of agriculture would have increased his profit; he did not want to dispossess them though, and so increased his own burden instead.

In his later years, he was also a real estate agent, flying potential farm buyers over acreage to be bought by the thousands. Later still, he would fly to Baltimore, as part of a longevity study at Johns Hopkins. There, scientists studied what it was that made him live.

As we met once at the D.C. airport, I thought I could’ve saved the doctors some trouble; their answer lay in the way that he chose to move—through the sky. For even when dying of liver cancer a few weeks back, he made the plane a portion of his departure; he flew to Starkville, Mississippi to donate his aircraft to the state university.

How much was on his mind that day as he flew? His family? His service? The home he had just left and would soon leave for good? All perhaps—but mostly, I think he just enjoyed the flight.

The instances I relate are only a handful, prompting me to reflect on how few and rare such men are: refined men, gentlemen, men who look impeccable in simple khakis and plain cotton shirts.

Men who speak in the dulcet tones and measured cadences of a people who mark each other with conversation—with question and reply—and histories relayed, weave upon weave, as the morning rises in a world to be worked in, and as the night falls, in a world made for rest.

People like Tom are disappearing, leaving into the sky. All around us they go, and I behave as though this were news—as if I had not been told it were so—had not seen it with my own eyes.